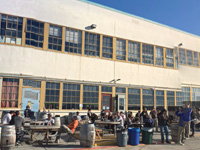 I think Faction has the most scenic views of any brewery in the bay area. See for yourself on their outside patio.

They make some great beers here, all sorts of hoppy concoctions. I’ve had several, all west coast IPAs with big hop profiles. There’s other beers, but I know what I like!

Roger and Claudia have a great brewery operation going on here in an old hangar on the edge of the crumbling tarmac of Alameda Naval Air Station (killer view of SF). It's all about the awesome beer here. Roger is a brewing genius and is constantly coming up with new recipes.
There are many beers to sample when you visit. My favorite is the A Town pale, only available on the island of Alameda.

Located on the former military site, Faction is housed in a former military hangar. The space inside is pretty huge and the brewing operations only occupy a small section. Adjacent to the brewing area are tables for people to sit and drink. There is a small tasting room in an area located just west of the tables. Additionally there is also ample seating outside. Faction has a great, unobstructed view of the City, which lies just past the decommissioned runway. The tasting room contains a host of in house offerings, many on the hoppy-side. My only gripe is that there seems to be a recent trend in the East Bay to amass in a single file line to get beer. While a single line seems like a great idea in concept, in reality I (honestly) think this leads to additional congestion, because people see others in line and feel compelled to also get in line whether a beer is needed or not.

Bottom line, the views are great, the beers are awesome, but the location is random and feels remote (which I didn’t think possible in the Bay).

Amazing beers with one of the widest selections at a brewery I have seen. Awesome view, indoor and outdoor seating and the indoor includes taproom and production facility searing. Only downside is that brewery tour buses come through and clog up the place with very loud and sometimes drunk people...not a big deal but just hard to talk to and hear the people I was with. I have really enjoyed every hoppy beer I have had from there guys though so it you are trying to figure out whether you want to try there beers it is a no brainier.

Nice location overlooking the bay. Very relaxed atmosphere. Several people had their dogs wandering about. Nice selection of beer, 20+ taps all house beers. Reasonably priced and most of the beers were really solid. Will definitely return when on the area. No food available and not much seating inside. Several larger tables outside.

Cool spot in the old Naval Shipyard area, with a huge outdoor space overlooking the Bay and SF...inside with the bar is pretty tiny, but the area with all the brew equipment is a gigantic room that is mostly unused...they should consider having the back area more accessible! Amazing American style beers though and nice folks.

I thought this place was pretty cool, basically it's been built within an old airplane hangar that overlooks the San Francisco bay. The tap list was massive, plenty of beers to choose from. The service was prompt and helpful. I would go back here for sure.

Great location and amazing view of San Francisco. Beers are great and a lot of styles .

Only problem is very small bar in the corner so line is super long.

Awesome tap room! They typically offer around 20 different beers covering a full spectrum of styles. There are seats inside with a view of their full brewing set up as well as a nice patio area outside with a killer view looking across the bay at San Francisco. The staff is always friendly and the beers are always good. One of my favorite places to kick back and relax.

Faction is located in a bad ass location. They are right next to Hangar 1 Vodka, so they are supposedly going to have easy access to some barrels. There is no food available on a regular basis, so bring something with you. If it is a nice day, be prepared for an unobstructed view of SF. The beer is decent, but not always consistent. I am confident they will get there.

The brewery is unassuming, and I guess you could say rather hidden in Alameda in a converted aircraft hangar. The exterior ain't much to look at, but it's got a hell of a view of SF.

The selection of beer was nice, 20 different offerings on tap. There isn't any food served there, but a food truck will be outside ready for you.

The brews themselves were impressive, and the owner very personable. There are no bottled brews, so it's all on tap. It's a hidden gem, but judging by the Sunday crowd, it's well received. I say give them a try.

Faction Brewing in Alameda, CA
Brewery rating: 4.01 out of 5 with 898 ratings