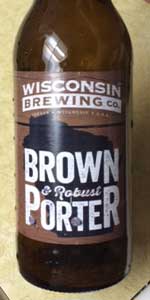 i put this one squarely into the new and booming session brown category. its a thin but flavorful brew, a bit one dimensional, but highly approachable and i say session because its more than simply low alcohol, its easy drinking, well carbonated, and not particularly demanding on the drinker. big head in the glass, muted lighter brown colored brew with a nose of fresh chocolate malt and a bit of sweetness to it. its surprisingly dry in taste though, but there is a hint of sweeter butterscotch type grain flavor in the middle of this, and very little of the darker roasted barley. not sure why robust is used n the name, its quite a mild brew on the whole. a hint of dried fruit before the finish, and not any more hops than are required for balance. the lighter body is nice when this is real cold, but it doesnt warm up super well. i liked this a lot in a party context, i could drink them all night and it beats the crap out of macro beer, but there really isnt enough here for me to seek it out again.

Poured from 12 oz bottle into shaker pint glass.
A: Pours a slightly reddish brown hue with 2 inches of frothy light tan head. Good retention.
S: Nice roasted caramel malt aroma...but not much else.
T: Nice roasted caramel malt with some toasted grains and a hint of a grassy note.
M: Light body. Dry and slightly bitter as per style. Mildly sweet...almost creamy.
D: Slightly above average for style. Not bad, but just a pretty basic brew.

Aroma is sweet and nutty, with little hint of roast. Quite nice.

Taste is definitely on the sweeter side of the spectrum, with tones of roast nuts and chocolate. Malt-forward, most definitely. Drinks smoothly, and approaches a very solid brown ale, almost. Solid and more than session-worthy!

Appearance: Pours with a medium brown color but sits very dark dark brown in the glass. Half a finger of head on the pour which settled in to a thin layer across the top while drinking. Low active carbonation overall for the style.

Smell: Sweet molasses on the front. Airy caramel and a touch of roasted malt on the body. Milk chocolate and some lactose dairy sweetness on the back end.

Mouthfeel: Pleasant transitions of sweet and dry. Carbonation is light but provides a nice base of the malts to shine.

Overall: Another very solid brew from Wisconsin Brewing Co. Love the 12pk can format, and this is a solid summer sessionable porter. A perfect change of pace for the warm months ahead.

While I enjoy a good Porter now and again, it's not exactly my favorite style. But when my favorite all-time German-style beer brewmaster decides to try out a Porter, I think it's worth a sampling.

Hmm, a brown robust Porter -- thanks for confusing the issue Kirby!

No real dating on the brown longneck, but the brewery hasn't been open that long.

S -- Caramel up front with some earthy, clay-like undertones. Roasted malts in a coffee-like character, some vague dark fruits and creamy, milk chocolate notes in the finish.

T -- Solid roasted malts up front with some mellow dark fruits following. A good bitterness from hops acting as a backbone balance through the flavor. Coffee characters in the finish that linger thru the aftertaste with some very light citrus marking through.

O -- Yeah, I can see this as a cross between brown and robust Porter. Not real hoppy like Robust, but carrying a great body and mouthfeel. The flavor has good roasted malt character, but more caramel in character than relying on heavily roasted malts and hops. A nice Porter for anyone to enjoy.

Pours dark brown with a tan head that soon settles to a wisp. Trailing lace sticks.

The smell is of iced coffee - lightly roasted - with a hint of chocolate.

The taste is of some sweet cocoa powder with mildly roasted coffee beans. Earthy/spicy hops come through. Because of the thinnish taste, some alcohol comes through. Finishes somewhat abruptly.

On the thin side, but as it swirled over my tongue the body grew a bit. The initial bit of fizz settled, giving it some creaminess and it's pretty smooth overall.

A fairly good porter - leans towards a brown ale. A bit of a hop presence to it. The malt could be richer, but it works as it is. Not bad.

12oz bottle, no bottling date to be found but it can't be that old as the WBC beers started rolling out about a month ago, if not sooner than that. Poured into a wine glass today, 12/10/2013. Part of my local shelf porter exploration.

Pours a dark brown, opaque body with a very thick, small bubbly-type tan head that retains quite well, leaving a thin film of head on the top of the beer. Also leaves lacing as it goes down as well. Solid appearing porter, better than most.

Smells.. well, kind of boring. Some concentrated scents of espresso and roast chocolate malts, but not a particularly intense nose. Pretty straightforward, smelled better than Mudpuppy that's for sure.

Pretty boring flavour profile. Some coffee bitterness, roast malts, a little sweetness, some earthy bitterness on the back end. It's all there, but its not very well integrated or interesting. Just another barely average porter.

Thinner bodied, a bit thicker than Mudpuppy Porter and a rather drinkable brew. Low ABV at 5.2%, sessionable and nothing too crazy. Good carbonation, a bit fizzly on the tongue. Aftertaste is a strong earthy bitterness that's actually quite nice.

A decent shelf porter, nothing to write home about. Its not a beer I'd be looking to drink on a regular basis when Edmund Fitzgerald is distributed to Wisconsin and is sold at the same price point. My first WBC brew here and I find it to be fairly unimpressive. Certainly not as well-crafted as O'so Night Train porter.

Had a 4 oz. sample at the brewery, poured into a plastic cup.

T=Chocolate and a bit of sweetness; also creaminess...roasted malts present as well.

M=Medium light body...a tad lighter than say, Founders' Porter, but still rather ample. Rather low carbonation. More of a session beer than most other porters, but retaining the flavor that most other lighter porters lack.

O=My 3rd most favorite porter, behind Great Lakes' and Founders. Their website indicates that this is Kirby's first porter (he never did one for Capital), and his expertise quickly shoots WBC up to the best porter from Wisconsin (* I haven't tried O'so's Night Train yet, however). Hopefully, they'll introduce a sampler pack where people can try this style and see how good it can be.


Brown & Robust Porter from Wisconsin Brewing Co.
Beer rating: 83 out of 100 with 68 ratings