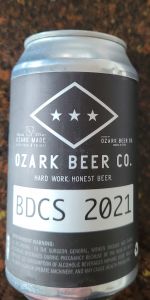 I am not one to notmally use profanity but holy f.cking sh.tballs...this beer is a revalation. the body is that of sofia vergara....smooth, silky, sexy. nose is nice and all but the taste, the perfect marraige of...well...EVERYTHING. 5 stars

This is the first Barrel release by Ozark, and they hit a homerun. An Imperial version of their standard Cream Stout recipe, then barrel aged. It’s stunning. I’m being harsh and its still near perfect.
Forcing myself to find a negative, the aroma didn’t quite ’pop’ for me. But, again, that is nit-picking. This is an incredible offering.

A: Oil black, thin cream/khaki head which dissipates quickly with no lacing.
S : Like a boozy chocolate milk. Lots of heavy cream, a bit of chocolate, pepper and vanilla.
T: Very nice. There's all that cream and vanilla, and just a hint of the spice/cinnamon/pepper from the barrel.
F: Thinner than I'd have liked from the style but nice and velvety. Seriously it tastes like having a coffee but without the bitterness.
O: I would definitely stock up on this. Just got 2 4 packs but regret not getting a case. I hope they can the coffee version as well.

Poured from the can into a Prairie tulip.

Appearance - Pours black as night with a little bit of moonlight on top.

Aroma - As it warms, the aroma becomes more pronounced, but the barrel presence doesn't overwhelm the beer.

Palate - The base imperial version of their cream stout would be a fantastic beer on its own merits. The barrel has only improved upon this by imparting hints of vanilla and peppery spices. Most barrel aged beers are much too alcohol forward and somewhat of a chore to drink. BDCS strikes the balance of having a barrel presence, but as a compliment to the beer and not a substitute.

Texture - Velvety smooth and nuanced. Not too thick, but with a subtle complexity to the texture.

Overall - It would be unfair to compare BDCS to beers such as KBS or BOMB!. There is no added coffee or adjunct flavors in BDCS, even though you get a hint of coffee in the taste. An appropriate comparison would be to Bourbon County Brand Stout and BDCS is a superior beer in every aspect.

Edit: After having many highly rated BA Stouts during this past year, this is simply the best. The brewer truly needs to release the non-BA version of this.

Pours black, like a tricked out minivan’s rear windows. Nice khaki head with good lacing. Aroma is dark chocolate, bourbon, and vanilla. Good oakiness, sorta makes me think of an acorn sitting on a bean bag(a little nut on a comfy pillow). Taste is very rich. Lots of chocolate with good bourbon complements. Vanilla, caramel, and oak, and cocoa powder. Smooth on the tongue with moderate carbonation. Rich and thick mouth feel. This is an outstanding beer. It will stalk you like a raptor and steal your soul.

Never thought BA Darkhorse Plead the 5th would be topped, well I was wrong. So rich and creamy with a perfect balance of roast, sweet, Bourbon, coffee, etc. Coming out of a hand stamped can only makes it better.

Pours a dark black opaque color with minimal tan head. Smells of chocolate and bourbon with a tinge of marshmallow. Nice roasted malt taste followed by a sweet chocolate with nice oak and light bourbon on the back end. A wonderfully balanced beer. Well done Ozark!

Many thanks to russpowell for this can!!

A - Pitch black pour, burnt toffee colored ring that's cream-like, very sticky and viscous on the sides of the glass with lots of legs.

A huge hug out to scarysun for this minimalist silver 12 oz. can (2017). I’ve put up more ISO posts for this bastard than any beer I’ve ever hunted. And it’s here. I’m going to put on some Wang Chung & do a happy dance.

The pour is black with scarce visible carbonation. The nose is roasted & charred chocolate milk framed in soft barrel. Nice.

BDCS (Barrel Aged Double Cream Stout) is softer & lusher than any double-digit stout has a right to be. It’s like Almond Chocolate Milk served in a glass that was quick-dipped in bourbon. Slick & silky smooth, with a massive chocolate hit up front that overwhelms everything else until it begins to warm. Subdued notes of roast, cake batter (I love raw eggs), sharp cocoa before the bourbon comes in & settles in right above my happy place. This should come in slop buckets.

The mouthfeel on this is an unadulterated joy. An excellent beer that almost lived up to my endless quest

Pours black and a bit shiny. Small dark khaki head is slow to form and but quite dense once it does. Doesn't last terribly long but lots of lacing left behind. Lacing is spiderweb like and very sticky.

I get the chocolate and vanilla first. Milk chocolate, fudge, and cocoa powder. Based on the aroma, I expected the bourbon to be the dominate flavor. Instead, it's more a strong complement, noticeable and ever-present but not overwhelming. Cream and caramel. In the running for the best flavor of any beer I've had.

A truly special beer. Like putting a piece of fudge and chocolate milk in a blender and then adding a shot of bourbon.

This is a fantastic beer and one that I would put up against any of the "big guy" craft beer BBA's. I found the aroma just a bit "not" but the flavor was not; it got better as it warmed and I would definitely recommend this beer to anyone.

L: Black onyx body with a generous 3mm sandy head and distinctive lacing around the glass
S: Mocha, dark cocoa, and fresh chocolate chip cookies
T: Honestly this was like drinking straight boozy chocolate milk - phenomenal flavor profile. However, the sweetness is swiftly met by a mildly bitter coffee and vanilla lightness and very subtle bourbon notes - the heat is artfully subdued however
F: Thick, luscious, and creamy mouthfeel that's on par with BCBS in my opinion
O: This is a decadent and engaging stout from the first sip. Given the low number of ratings, at this point, for this highly regarded stout I had my suspicions, but for me this beer delivered in full. The ABV is well masked and the heat from the bourbon barrels is well integrated and not cloying in the way some BA stouts can be that are drank 'too young'. Overall I thoroughly enjoyed this one - a great BA stout that stands out in a very crowded field.

Poured out jet black with a thin brown head on top. The smell of the beer is heavily roasted. The taste of the beer also has a lot of roasted malt and burnt chocolate flavors with some smokiness in there too. The feel of the beer is big and thick. Overall the beer is damn good, really cool to see these types of beers coming from the Southern States.

A - Poured black with a thin later of medium brown head.

Got a few of these having no idea what to expect and was just away. Just an incredible beer. Had KBS a couple nights prior and much preferred this. Unlike any other BA stout I've had.