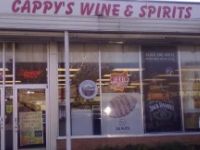 View: Place Reviews
Reviews: 23 | Ratings: 41 | Log in to view all ratings and sort
Reviews by GenghisK:

I love going to Cappy's. They have a selection like I have not seen anywhere else in the area. The people that work and go there to drink are all great. They have a nice deck out front that is great for enjoying a beer and hanging out with a very nice crowd.

Staff is rude and pretentious. I can’t ever go in there without them feeling like they need to put their two cents in. Have quite literally been harassed by them just so they could get a laugh. I won’t be going back here again. If they think this is an appropriate way to treat a customer, thats disappointing.

The best overall selection in the area. Big tap list that rotates often. Helpful and knowledgeable staff. The outdoor seating area is comfortable and laid back. A food truck was on-site when I visited last. Good selection of bombers and singles. A must visit for craft beer geeks.

Best selection in the greater Cincy area. Love the events they run on a weekly basis. They strike a great balance of supporting local brewers, and spotlighting new and rare brewers. 40 taps providing a great variety whether you come in for a pint or few, or need your growler filled. In addition to the taps, they have an amazing selection of product, from sixers to bombers. Staff is knowledgeable, and you can tell they're beer people at heart. Provides a great atmosphere for the business, and makes you want to support them with your business. Covered, heated deck out front to sit back and enjoy pint nights, with local food trucks on hand to soak them up. Great spot.

This is a great place to get high quality craft beers. They help you out if you need to pick the perfect beer. Their recommendations are very good. They even hold beer for you until you can get in the store to pick it up!

Cappy's is easily the best shop in the Cincinnati area. Their bottle/can selection is huge, and they have 40 taps and a Pegas growler filler. The covered patio is great and there's usually a food truck on site a few times each week.

Edited and increased the "Vibe" rating to 4.75 because the patio has heaters and vinyl curtains for days with less than desirable weather.

Great selection of craft beers along with excellent growler selection. Always friendly staff. Definitely not a yuppie beer snob hang-out. Love it the way it is! Friday night is not the best time to get your growlers filled since the place is usually rock'in. But then again, you can grab a pint and chill while you wait.

Not a large store, but the beer selection is insane, and now there's 40 taps and they do crowlers. As a resident of Central Kentucky, it's worth driving another 25-30 minutes whenever I'm in the NKY/Cincy area to see what they've got.

I learned about Cappy's about 9 months ago and it's really opened up my eyes to what I should expect in a Bottle Shop. Unfortunately, it's not near my house, so it usually takes a special event to get me here anymore, or something I want to come in.

Vibe - Really improved over the past few months. Their weekly Thursday Tap Takeover events has necessitated more space. They have certainly made an improvement by building a large deck on the front, which will be wonderful spring-fall. They also recently added some panels around the outside of the deck to keep it warmer in the winter.

The inside of the store is a little cramped, but fairly easy to navigate. With the amount of things they get in the store, and having to manage liquor and wine, they make everything fit in fairly easily.

Quality - If it's distributed to southwest Ohio, they get it. One of two places I've ever seen CBS on tap in southwest Ohio. They recently added to their PEGAS system and now have 40 total taps. Bombers galore, everything very neatly organized and easy to find. If they weren't as friendly as they are already, it'd still be super easy to find what you are looking for.

Service - Staff is quick and knowledgeable. They will do holds on items, which is great, but also kind of a problem now that they have such a large following. They are quick to respond to questions on twitter and on the phone.

Selection - I gave them a bit of a knock in this category. While the selection is great, people sitting on Twitter all day can get a better pick of "Holds" which I think hurts things a bit. They seem to be backing off on the holds a LITTLE bit now. Also, limits on some beers kind of knocks them down a bit (i.e. 1 or two bottle limits on 6 packs.)

Overall, if you are in Cincinnati, this is one of the places to check out!

Neighborhood gem. Amazing amount of beer in a small space. Selection is way above average. Staff is helpful. 10-12 beers on tap so bring your growler. Tastings on a regular basis. They are having one tonight and bringing in a food truck. It is definitely worth a trip.
2/16- new taps added. I think they have 25+ beers on tap now.

This place is a really underrated spot to grab great beer on tap or by case. I'll admit that on my first visit, I was pretty let down. Lots of liquor and not a great crowd. As time went on, they just kept getting more and more amazing beers on tap. The overall experience improved on each visit and now it's a place a look forward to visiting at least a few times a month. A great place to visit if you're looking for something outside of downtown Cincinnati. Loveland is an under the radar beer spot.

Cappy's is where it's at. They have a great selection and an always rotating tap list. Plus, they just expanded their outside deck by adding more space! Plus plus, it's a covered space now!

Great selection and knowledgeable staff that are very friendly and eager to help. Only knock is the stupid expensive prices of their growlers.

Consummate bottle shop with everything you could ask for. Knowledgable staff, great service, amazing selection, constant events and other exciting things going on. Just the best place in Cincy.

It took all of one visit to convince me that this is the single best place on the Ohio side of the Greater Cincinnati Area to purchase beer, period.

While fairly small, this store has a staggering amount of good beers, including beers I was told never made it to Ohio by other shops in the area (Boulevard BBQ, ahem). Their selection of amazing, more-rare-than-common beers from US brewers is outstanding, and their import section, while small, is well-curated. Slap on the sizeable PEGAS growler station (from which they will serve you pints while you shop, if you are so inclined), and what else might one look for?

Oh, right, service. Well, I was greeted warmly as I came in the door, given a mini-tour of the place, and had at last two other employees (including the owner) come up to me as I was browsing to make sure I was finding everything all right, and to just shoot the breeze for a second.

All in all, I was quite impressed, and this place has a significant portion of my business for as long as I remain in the Cincy area, and on any trips back to visit family once I'm gone!

I've been going to Cappy's for a couple years now. They have great customer service. Their staff takes time to get to know you and your tastes. They might not have the largest selection for growler fills, but it's guaranteed there will be a few things on tap you can't find anywhere else. They stock an enormous selection, I'll go out on a limb and say it rivals Jungle Jims, even if they don't carry the inventory.