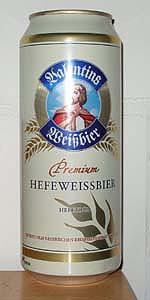 TASTE: Cotton candy, full grain bread, green banana, clove. Handsomely flavorful and very true to the style. The sweet grains add a nice bit of mustiness to the beer as well as depth. Hop flavor is leafy and herbal, with a well suiting complimentary bitterness.

This is a very fine Hefeweizen, with rich flavor and fine balance. Paired very nicely with a meat and cheese platter. I'm sure ill be drinking this again. Excellent hefe.

A- Something between yellow and brown. Opaque. Can't see through at all even though the Molson Dry glass I poured it in is quite slender. Head didn't last very long but it seemed light and fragile.

S- Apple and banana purée. A bit of toasted wheat.

T- Bready and yeasty but the banana is still very present as well as some of the apple. A tiny touch of hops and a american adjunct lager bite. Bit of a lemony character.

Appearance: Pours a dirty orangey gold. Very cloudy as any good hefeweizen. Large head, retains about 1/4 inch that lasts most of the way down. Leaves some lace.

Aroma: Wow, very strong banana and clove esters. Wheat malt, coriander and dried paw-paw also make an appearance. As with most hefe's I love the smell. Let's just hope that the taste will live up to the smell.

Taste: Thankfully I am not disappointed. The taste does live up to the smell. Dominated by sweet/sour yeast, but with a good amount of malt to back it up.

500mL bottle into my hef glass.

S: among the strongest banana aromas I've ever smelled from a hef.

T: bland and watery, quite unimpressive for a hef. Malts, maybe some banana, but not much else. Not bad I guess, but very boring and watered-down. And I &lt;3 hefs!

D: easy to drink, especially given the lack of flavor. Won't be buying this one again though.

This is an ok Weissbier, Not too much to say about it that hasn't already been said. The fluffy white head gives off a soft fruity smell, light spicy notes as well. The beer is opaque and yellowish gold. This is a pretty tradtional brew though and it's not bad.

Poured into a hefeweizen glass.

Smell. Some of the usual fruity esters are there. This is kind of ruined by a tart funkiness or that is overpowering when first poured, but fades as the beer starts to breathe.

Taste. Starts of with a bready, slightly stale and thin flavor. This is cut by the twang of citrus that is joined in a strange way by an earthy yeast presence. Some clove comes in along with a sort of stale crouton-like breadiness. The finish is surprisingly dry with a clean lingering bready malt presence.

Mouthfeel. Quite thin in body with a large amount of carbonation. Also, a surprising dryness about ¾ of the way through.

Relatively low fruity esters in this one. The thinness of the mouthfeel really does not do it for me. Its most redeeming quality is the citrus and earthy notes.

Smell: wheat, yeast, and some malt.

Overall:
This isn't bad. It has a decent flavor initially, but goes down watery. There are better examples of this style.

Appearance - Hazy gold/amber colour with a large size fizzy white coloured head. I can't make out much carbonation due to the haziness and there isn't much lacing. The head lasted for 5 minutes.

Taste & Mouth - The beer has an average amount of carbonation. I can taste lemon zest and orange mixed with breads/grains and some cloves. There is also some light banana flavour and it finishes with a citrus spicy aftertaste.

Overall – This is a very drinkable beer that would work well as a summer refresher. It won't blow you away but it's very serviceable and the price is reasonable. I'd buy it again.

Bought this down the street in a large convenience store for 27 crowns, that's a little over a dollar. Pours, out of a 500ml can, a very hazy golden orange color with a nice white foamy head that fades pretty quickly and leaves little lacing. The nose is fruity, mainly bananas with a bit of wet stone minerality behind it. The taste is fruity with a bit of bubble gum and very little hops. Not a bad purchase very easy to drink and enjoyable but I could have used a bit more carbonation. Not a bad purchase, though. Definitely the best hef I've had out of a can...or wait...maybe it's the only hef I've had out of a can.

Can into Budweiser pint glass (all that was available) in low altitude Galway, Ireland. Reviewed live.

Sm: Wheat with hints of citrusy esters, though less pronounced than in other weissbeers. A rather light scent.

T: Cream-laden wheat with some mild citrus esters, mainly orange and little else. A bit watery on account of too much thin cream. Pretty simple. Balanced decently but built poorly.

Mf: Nicely slightly coarse, but too wet. The watery aspect of this beer is a severe problem.

Dr: The esters need to be brought out more. The cream is unwelcome in this style. It's affordable in Ireland, but not a great beer. Go with the Lidl grafenwalder if you're looking to get bollocksed on a cheap hefeweissbier.

Appearance: Two fingers of head with good retention. Very cloudy, with a dark gold-to-amber color. Left plenty of lacing down the glass.

Taste: A little on the sweet side. Wheat, not as much banana as in the smell, a little clove.

Mouthfeel: Light to medium body. Plenty of carbonation, almost too much for the style. Finishes crisp.

Overall: An easy drinking weissbier, but not outstanding. I would drink it again.

Got this one from Hungary.

a: pours a pale cloudy orange with a 3 finger head, bubbly, dissipates slowly.

s: a lot of wheatiness, clove spices, some banana but not too heavily

t: wheats, light spices of clove, some banana, a touch of a wateriness at the finish. nice carbonation level, but it lacks some body and complexity of better wheat beers.

o: a solid weissbier, but there are certainly better examples available. a good introduction to a weissbier though, in my opinion.

I brought a 500ml can home from a recent trip to Europe. The beer poured a cloudy deep golden color, good head that dissapates quickly. Smell is includes cloves and fainted hint of banana, lemon and spices. The mouthfeel is light to medium body with the taste similar to the smell, with more banana being more pronounced. Not the best I've tried, but one you can drink easily.

bottle purchased for me by a family friend that heard I liked good beer, thus this was gifted. Well the bottle does say "premium", so I'll give him that!

A: cloudy orange with some light thin bead egg shell foams. A ring of foam remains around the top of the glass after about a 2 finger foamy head. light swirls of silky films remain on top. The body is cloudy with some real raw honey characteristics. Has as much white character as it does orange, and they clash for a

S: Some watery clove over not so apparent banana peel. Smells kind of like old butter lettuce. Comes off a bit fake to me, the yeast character seems weak and macrod. Not much sweetness, but a bit of wheat to at least make it apparent what style of beer I'm drinking.

T: Some wet hay, soggy wheat, and light old orange peel that's baked away all of its citrus qualities. A little bit of floral character that makes me think of air fresheners that you see in taxi cabs. Not really crazy about the flavor, and it has that really washed over bitterness that makes me think macro macro macro. Just very tame with a lot of watery flavors. Celery in the finish.

M: Very fizzy, effervescent. It is as relentless as you could ever hope a soda pop to be. A nice feel that is perhaps even a bit light for a hefeweizen, but it's by no means bad. Fizzy, but soft, and I may actually think better of it if there were some flavors for the mouth feel to accentuate.

O: Just because it says premium doesn't necessarily mean it is, don't believe everything you read on beer bottles -- I'm sure that's a Chinese proverb that I have yet to discover a citation for. The best thing this beer has going for it is that it's a traditional German Style from Germany and it has German writing on the bottle. Other than that I'd say it just falls in that mediocre category. This might be the real deal as far as tradition, but I call it a poser in terms of execution.


Valentins Weißbier from Park & Bellheimer AG
Beer rating: 81 out of 100 with 172 ratings