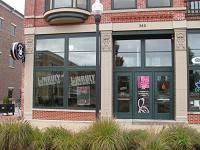 Some of the best beer I've had. The IPA and DIPA were extremely tasty and not overly bitter like most IPAs these days - lots of floral, flavorful hops.

The cream ale and lager were extremely flavorful for the style, the best I've tried of either, and I enjoy a good lager.

The Belgian Bier de Garde, red ale, and brown ale were also impressive. The blueberry weiss was interesting but I don't have much to compare the style to. The stout I tried was alright.

Summary: Best IPA, lager, and cream ales I've tried. Someone at this brewery has excellent taste buds and knows how to pump their beers full of flavor. I did not expect this sort of quality when I came here. Pretty cool that they have an excellent pizza place in the same facility too. One of the nights we went they had live music (open mic) which happened to be excellent as well. Awesome place and my favorite brewery in Michigan. Now I need to convince the local taproom to get some kegs....

Edit: Forgot to mention, their wine was fantastic.

the beers are different. venue and food is great

Nice up and coming brewery in downtown Muskegon, MI. They do not serve food (yet), but pizza and subs are delivered there. They do not bottle their beer yet, hopefully soon. They only way to take it out is in a growler.

My wife and I stopped here on a Friday mid-afternoon as part of a mini pub crawl to try the beers at the two new breweries in Muskegon. The building is located on one of the main downtown streets, and, although it looks new from the exterior, it becomes obvious from the interior that this is an old structure that has been rehabbed into something good. The brewery shares this large open space with a coffee shop and a pizzeria, so those food amenities are easily available to brewery patrons. (A supply of sandwiches from a local sandwich shop is kept on hand, and is also available as a food choice.)

The place was not busy so we chose seats at the bar. There were 10 beers on tap, so we ordered sampler glasses of all of them so that we could evaluate everything. It was a nice selection from a light-flavored cream ale, to a session IPA, a coffee brown, an imperial IPA, an oatmeal stout, and a Belgian-style wheat ale. For a relatively new brewery the brewer has done a good job dialing the beers in to the recipes, except for the Pocket Change Pale Ale which we felt was below average and reminded me of a homebrewed beer, and the Cream Ale which had some sort of an off flavor. All of the other beers were scored at a C grade up to three beers that were at a B level. Especially notable were the Revel Rouser West Coast IPA, the Lunch Break Session IPA, and the Tropical Thunder Imperial IPA. Untapped shows a boatload of beers listed for this brewery, so they appear to be actively trying to find themselves and which beers are well-liked, or the brewer just likes to mix it up and is brewing anything and everything. We enjoyed ourselves and would go back again.