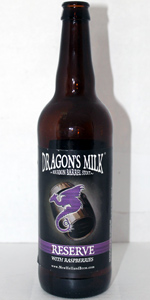 Never thought of DM as an imperial stout. Oh well. Deep deep brown in color. Not much head but obvious carbonation level. Very bright, tart raspberry aroma. Some decent chocolate as well. Nice raspberry flavor against a dark chocolate back round. Mild oak and vanilla. Lingering tartness that is just great. Somewhat thin mouthfeel but not in a bad way just not up to the imperial level I was expecting. Goes down too easy. Very nice brew. Once again New Holland's special beers far out weigh their regular offerings for my money.

Deep, dark, and lavish with roasted malt, chocolaty sweetness and wafts of bourbon- the original Dragon's Milk has always be a stern and steady stout. But the addition of raspberry brings new brightness, new acidity, and even more added complexity for a genuinely unique taste.

Pouring with seemingly an oily viscosity, its ominous darkness draws in the senses as a simmering creme of foam pulls from the beer and carries those decadent aromas- dark-roast coffee, bittersweet chocolate, toasted molasses, walnut and brownie carry the nose and early palate while waves of secondary flavors gain steam.

The middle palate is creamy, rich and succulent in its sweetness. Roasted sweetness and toasted earthiness is expounded upon by the tangy bold fruit flavor of raspberry. Interestingly, peps of black cherry, blackberry, blackcurrant, and red grape also pulls from the modest fruit additions. Coconut, vanilla and heavy whipping cream smooth over the rougher edges of roast as the oak flavors offer a mature and calm taste.

Full-bodied and silky smooth, the beer's creamy substrate holds firm even in the beer's finish; balancing only with the light berry acidity, pectin and oaky tannic bite. Unmistakable bourbon character allows for a warm finish that's decorated with aftertaste of bourbon ball candy, perhaps with a side of raspberry jam.

Dark brown to light black in color with ruby tinting when held up to light. A fingernail of tawny brown covers the majority of the top. Brussels lacing. Aroma is of artificial/cough syrup raspberry flavoring along with very sweet, dark, sticky malt. The flavor is a blend of medicinal/artificial raspberry flavoring blended with a heavy presence of sticky malt and earthy/woodsy notes of oak in the finish. Cloying and medicinal. Bummer. The mouth is thick,viscous, and sticky.

S: Immediately after the pour, the raspberry notes jump out of the glass but as the beer warms up the raspberry fragrance gives way to the bourbon barrels and roasted malts. However I did not detect any chocolate, coffee or caramel notes which are usually associated with this brand.

T: Up front the familiar bourbon stout takes center stage but quickly sidesteps as the strong raspberry tang screams for ultimate dominance on the finish, leaving a sweet yet bitter film on the tongue.

M: The alcohol from the bourbon warms the tongue while the sweetness (and bitterness) from the raspberries cuts the alcohol, leaving a weird but welcome mixture coating the palette with barely any carbonation.

O: One could label this under the dessert beer category but I don't think I'd go that far. The raspberries in this batch of Dragon's Milk help to create a unique blend, but sadly they also stifle the excellent stout flavor that this line is known for. This may turn off the hardcore DM fans. Although the raspberries are a nice departure, I don't think I could drink more than one bottle at a time, the 11% abv notwithstanding of course.

A: Pours a dark, dark mahogany. Surprisingly thin for the style. 1/4-finger off-white head. Don’t remember if Dragon's Milk is pitch black or not, but this is certainly getting some light through. Almost looks like a really dark barleywine or scotch ale.

T: Dried raspberries, milk chocolate, hint of vanilla. Oak and bourbon come through in the finish. Slight heat and booze right at the end. Tons of oak and barrel in the finish, almost a dry, earthy, papery taste.

M: Not super thick, great carbonation. Not overly boozy, but some heat in the finish.

O: So Dragon's Milk was probably one of my first BA Imperial Stouts, introducing me to the style. To this day, it's not my favorite beer, but these Reserve variations do get me excited. The Toasted Chili was unique, but way too hot for me. For this one, I was mostly disappointed by the appearance of the beer. Just oddly thin and translucent. Unusual for the BA Imperial Stout style. Also, the raspberry aroma and flavor loses impact as you drink through the beer. Bourbon comes through more and more by the end though. It's not quite balanced well, as there's lots of dry boozy flavors from oak barrel dominating. The raspberries tend to make this dry and thin, almost chalky. So far, 0/2 on the variations. Stick with the original.

Recommendation: Any fan of New Holland or Dragon's Milk should seek this out. Otherwise, it's passable.

2014 vintage, live review (12/28/14) 22 oz. bomber poured into a pair of tulips. Pours damned near jet black with only a hint of reddish-brown when held directly to a light. Finger of creamy beige head with reasonably lasting retention and solid, thick walls of lacing.

Raspberries dominate the nose and the beer is actually a bit one-dimensional when it's cold. Barrel aromas come out as it warms, with a thick oaky, touch of vanilla, and huge alcoholic whiskey presence. The lightest of roasted malts as well as milk and dark chocolate flavors play in the background, increasing steadily as the beer continues to approach room temperature.

Barrel flavors dominate with a dry oakiness and a lot of alcoholic warmth. Dry, roasted malts and a touch of bittersweet chocolate play nicely with the semi-sweet but also tarty raspberries. The raspberries are very noticeable but don't dominate as they did in the nose and provide an accent as opposed to overpowering the beer. A touch of vanilla from the bourbon barrel gives a slight sweetness to balance it out. Overall the flavors are actually quite tame for a barrel-aged beer and fairly well-balanced. The generic alcohol flavor (as opposed to the bourbon) is a bit strong, but easily tolerable. No astringency or noticeable yeasty flavors.

Full-bodied and moderately carbonated. Overall fairly soft, but a tad slick mouthfeel. 11% ABV provides a warming alcoholic sensation that does border on being harsh as the beer warms.

Overall, this is an excellent beer. It's more subtle than I was expecting, but that's okay. Excellently balanced; fruit beer haters ought to find the raspberry flavor subdued enough to still enjoy this one. BA stout lovers may be a little underwhelmed but not too disappointed.

On tap. Poured out an opaque, jet-black color with a small, light brown head of foam. It smelled of sweet raspberry, chocolate, toffee and roasted malt. Sweet chocolate and toffee with roasted malt and a hint of raspberry.