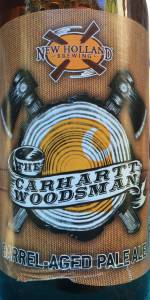 I picked up a six pack of New Holland's The Carhartt Woodsman last week at Meijers. I haven't had the best of luck with New Hollands Pale Ales, but I find the idea of a barrel aged Pale Ale interesting and I thought I would give it a try, so lets see how it goes. No visible bottling date. Poured from a brown 12oz bottle into a imperial pint glass.

A- The label looks ok, it goes well with the name, but I don't think it's too eye catching. It poured a light burnt orange/golden color that took on more of a burnt orange color when held to the light with almost two fingers worth of fairly creamy white head that died down to a thin layer and thick ring that stayed till the end and it left some nice patchy lacing behind. This was a pretty good looking beer, I have no complaints at all.

S- The aroma starts off with a slightly higher amount of medium sweetness with the hops being the first to show up and they impart a nice mixture of fruity and floral hops with the fruity aromas sticking out the most imparting some nice citrus, fruity and berry like aromas with just a little bit of piney hops showing up in the background. Up next comes the barrel which shows up just enough to be noticeable and it imparts a nice light oaky and creamy vanilla aroma that leads right into the malts with some bready, sweet malt and light caramel like aromas. This beer had a pretty nice aroma, I like the hop profile and the light barrel aspects worked well with it.

T- The taste seems to be similar to the aroma and it starts off with a medium amount of sweetness with the hops still being the first to show up and they impart the same aspects that they did in the aroma, but this time it's a little lighter and more balanced with no single hoppy aspect sticking out the most. Up next comes the barrel which shows up just about as much as it did in the aroma and it imparts the same oaky and vanilla like aspects and it transitions right into the malts which impart a nice bready, sweet malt, grainy and a light caramel like flavors. On the finish there's a slightly lower amount of medium bitterness with a light malty, hoppy and light barrel like aftertaste. This was a pretty nice tasting Pale Ale, the barrel seemed to work well with the other flavors.

M- Fairly smooth, a little complex, crisp, on the very light side of being medium bodied with a slightly higher amount of medium carbonation. The beer had a nice mouthfeel that worked well with it.

Overall I thought this was a pretty nice beer and I thought it was a good example of a barrel aged Pale Ale, the barrel was on the lighter side in both the aroma and taste, but it worked well with this beer and it didn't cover up any of the base Pale Ale flavors. This beer had nice drinkability, it was fairly smooth, a little complex, crisp, not filling and the taste did a nice job at holding my attention, I could see myself drinking two or three of these, especially on a nice fall day by a bonfire, it goes great with the fall season. What I like the most about this beer was the balance, it was still recognizable as a Pale Ale and the barrel worked with it and didn't dominate it. What I liked the least about this beer was that the hop profile in the taste wasn't as fruity as it was in the aroma, but it wasn't that big of a deal. I would buy this beer again and I would recommend this to anyone who is interested in a barrel aged Pale Ale. All in all I was happy with this beer, it was just what it says it is and I liked the complexity that came through once this beer warmed up just a little. It isn't my favorite New Holland beer, but it's still pretty good and I have to say it's one of the better Barrel Aged Pale Ales I've had. Good job guys, this was a nice and fairly unique beer, I think you guys did a good job with this beer and I like the little bit of creativity behind it, keep it up.

S- Fairly hoppy, mostly grapefruit with a little spice. Faint woody aroma. Malt sweetness comes through with a little warmth. Quite aromatic to be sure.

T- Pretty true to the aroma. Grapefruit hops up front, saltine cracker-like malts through the middle, and a hint at the wood aging in the finish along with some spicy (slightly medicinal even) hopping. Definitely hop-centric. Would like to see a more substantial malt bill, but you're not going to get that at 4.4% ABV.

O- I put this in the same category as many of the new session IPAs, though on the upper end. I'm not a huge fan of hoppy beers with little malt balance. That said, it's more enjoyable than many I've had. Quite cheap (I appreciate that lower ABV goes hand in hand with lower price for once). I might buy it again when I want hops and lower alcohol.

We pour this brew from the bottle into our Great Lakes pint glasses. It glows a melty caramel coloring and sports a finger and a half worth of large bubbles of soapy white foam. This retains decently well, leaving sharp canyons of lacing around the glasses. Carbonation appears to be active as bubbles cake the submerged glass. A chill haze is noted, but otherwise sediment appears to be absent. The aroma combines zesty orange and floral hop oiliness, aloe saps, warming vanilla oak, biscuity pale maltiness, sweet honey, oatmeal graininess, multivitamin, buttery diacetyls, light plastic phenols, and creamsicles. The flavoring is much more bitter than implied in the snout, where we meet notes of tart orange peel and pith, creamy lactics and buttery diacetyls, vanilla chai spiciness, black peppery licks of ethanol, cantaloupe juice, dusty English pale maltiness, uncooked pizza dough yeastiness, white flour, herbal and grassy hop plantiness, and bittered oak barreling. The body is lightly medium, and the carbonation is also a smooth medium. Slurp, smack, cream, and froth are all intact, albeit lighter on the back end. The frothed creaminess does really come up at the front, and cools the mouth on the swirl. The mucosa is then left cooled and softly puckered from any residual sourness floating on by atop some driftwood. The abv is appropriate, and the beer drinks easily.

Overall, this is a nice, light offering for the style. There has been a recent push here in Michigan to amplify these light, hoppier styles of beer with barrel-aging, and it has been interesting to get a chance to observe this local cultural shift. With this beer, although it doesn’t blow you away with flavoring, the proper sentiment is certainly there. The wood adds to the flavoring through subtle notes, but adds more in the way of depth of feel, giving a crispier dryness to the finish. We could have stood for this offering to be deeper through the nose and flavoring, but again, we are pleased enough with the simple ingenuity of the final product.

Local Michigan grown Cascade hops and barrel aging in toasted oak are the highlights to this Pale Ale. Orange pith and faint vanilla come to mind, perfectly balanced. A little wet but this is a lower abv brew so it is somewhat expected. New Holland picked a great path to go down for a sessionable beer by letting the two star ingredients shine, oak and Cascade hops meld very well and happily linger on the palate with each sip. Keep this one around guys!

With the soul of pine, wood and fruit of the tree, what other base beer would better celebrate what's best about the woodsmen out there. Coupled with oak barrel aging, and the taste of all that hard work really come to life.

The Carhartt Woodsman pours a rugged honey amber. Its creamy froth pulls out all the caramel, vanilla and wood spice that entice the nose with hints of bourbon. A quick and marshmallowy sweetness greets the tongue before the stern carbonation and dry caramel begin to sing more drinkable ale praises.

Creamy and dry upon the middle palate, the sweeter tones relax and a stern caramelized grain flavor leaps forward along with zest hop flavor. Suggestions of pink grapefruit, dried orange peel and perfumy spruce give a slightly acidic bitterness and piquant citrus character to balance the caramel and oak.

Its medium-length finish sheds those caramels, vanillans and malt structures- foregoing all those bourbon flavors (sans booze), but allow the malt dryness and linger of resinous hops to carry on in aftertaste. The Woodsman is a highly drinkable ale with a healthy dosing of wood flavor from grain, barrel and hops for a highly integrated sense of appreciation.

The smell is of light grain, slight touch of caramel, some toasted wood.

The taste is sweet-ish. Some dry, mildly citric-spiced wood with the finish.

Drinkable, but I found nothing particularly special about it. Inoffensive. At leat they tried something different, with a low abv, light-bodied pale ale that has woody notes. Sweet with a toasted dry wood, light Cascade hop balance.

Copper with a two-finger head that leaves some lacing in the glass.

Pine hops with oak in the background. I haven't had many barrel-aged pale ales.

Nice and toasty upfront with buttery malt and a balanced hop profile.

Pretty much the same in the mouthfeel. Toasted oak, etc.

It's drinkable. I'm just not sure that there's an advantage to be had from barrel-aging a pale ale of this strength.

T: ripe peach that increases through mid-palate and then subsides ; light bitterness at the end;

O: didn't get any malt or aok, but it's refreshing and enjoyable;

A: Pours a lightly hazy deep apple cider dark yellow/orange/brown in color with light amounts of active visible carbonation and a hint of golden yellow highlights. The beer has a half finger sudsy foamy light beige head that reduces to a small patch of thin film and a medium thick ring at the edges of the glass. Moderate amounts of lacing are observed.

S: Moderate aromas of pine hops and citrus/grapefruit pith hops over the top of light aromas of oak. Hints of grainy malts.

M: Light to medium bodied with moderate amounts of carbonation. Hints of dryness in the finish.

O: An interesting style of beer, oak barrel aged with a low sessionable ABV - not sure the barrel aging really adds much to the flavor profile.

A nice light pale ale with soft and warm vanilla notes from the oak.