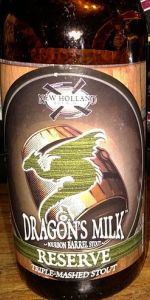 12 ounce bottle into an oversized tulip.

Pours a fluid but surprisingly thin brown and black, but settles into my glass pitch-black with a frothy oatmeal-head. Not much lace but a thick layer of film is present over the beer. 5

It smells like brown sugar and marshmallows with some maraschino cherries in the mix. Something from Willy Wonka's line of candy. Vanilla and chocolate are there but take a backseat to those attributes I mentioned earlier. I hate to say it, but this smells a little too sweet and dessert-like for me. 3.75

Cloyingly sweet, soda-like in body and feel, albeit a flat soda, and simply put, just more like candy syrup with some booze added. 3

Not my bag and there are some good flavors here, but they are as offensive as they are appealing, like an Eastern European gal.

Very nice! Had the chance to get this one on tap at the Grand Rapids location. Cola colored liquid in a small snifter. Aromas of wood and vanilla and dark cocoa and roast. Smooth on the nose, and not as heavy an aroma as I thought it would have. Flavor punches with alternately smooth Whiskey Barrel flavors and boozy burns. Sweetness abounds, whether it's dark fruits or cocoa or vanilla.

T.F: Just like it smells. Super smooth... strong roast grains and burned sugars. Whiskey definitely present and accounted for. Vanilla and chocolate... lighter espresso. Boozy... but not as much as 17% would make you think. Medium bodied... low carbonation. Warming... more complex as it comes up to room temp.

O: A stellar bourbon-aged booze bomb. Delicious... a slow dessert sipper, and definitely a departure from the rest of the 'Dragons Milk' line.

2019 bottle poured into a wine glass. An opaque dark brown color as expected with a very small tan head that left quickly. Aroma was surprising with restrained whiskey notes and big malt character - brownie batter and roasted grain. Taste followed for the most part. A thick brownie flavor met by the barrel. There were some cola notes and a sweetness likely from the malt and the big ABV. Full bodied and gloriously boozy. Enjoyable.

Pours a plum-tinted black color with close to two fingers of light tan head that fizz away very quickly leaving a thin, but lasting crown.

Restrained bourbon barrel and a little flat Coke, root beer and cherry in the nose. Maybe a little chocolate, too. It’s very mild.

The booze absolutely shows in the taste, though. The alcohol heat here packs a punch. Again, I’d say flat Coke / root beer and a hint of cherry add a touch of dull sweetness. There’s some even lighter chocolate, ash and nice wood character in the mix as well. Alcohol and very light piney bitterness are what linger in the aftertaste.

The feel is relatively thin for an imperial stout these days, and a touch sticky, with fizzy carbonation.

This one is mostly about the ABV, but there is enough malt character lurking beneath the alcohol to ponder over. Very fun to try, and I do like the booziness.

12oz bottle, snifter glass. Dark black body, one finger white head, shortlived with not much lacing, as expected from a big beer such as this. Smell is dark chocolate, a bit of fudge, slightly decadent, sweet brown sugar. Not much bourbon character, maybe a little oak. It's an overall a sweet tasting stout, a bit lighter in body, a lighter sweet chocolate fudge with a hefty dry brown sugar sweetness that isn't quite molasses or caramel. Mouthfeel is medium bodied, relatively light and slightly watery. It's the base beer but bigger proportionately, which means the relatively thin body still detracts a little from the flavours that are all there otherwise.

Sampled at SAVOR 2017. Rich and delicious and well integrated. Not cloying, despite the sweetness in the scent and taste. Hot finish, so it was better to sip.