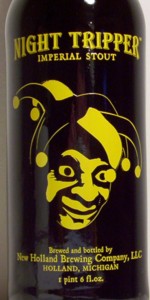 Black as night in color, with a good sized khaki head on top. Smell is of roasted malts. Dark chocolate comes out in it's flavor, with more roasted malts, chocolate, coffee or espresso, tobacco, and mild booze notes. Full-bodied mouthfeel. I liked this stout quite a bit.

Vintage 2016. Poured from 12 oz. bottle into stout glass. It pours an inky black color with some dark ruby hues when held up to the light, with a thin, khaki-colored head and minimal lacing. It features a rather subdued aroma of roasted malt and rich, dark chocolate. The chocolate was more prevalent in the taste, along with roasty malt, burnt coffee, and hints of dark fruit, caramel, and tobacco. It opens with a lot of sweetness but the finish is fairly bitter. This stout is medium-bodied, not as viscous and chewy as others, but the mouth feel is creamy. There is very little carbonation and you cannot miss the 11.5% ABV. While it didn't seem overtly boozy, I could feel it after 12 oz. Overall, this is a very nice Imperial Stout. It's not quite at the level of the leaders of the style but still very good and worth seeking out.

Pours thick, dark, opaque, and viscous. Slick and oily. The head is limited but fine lacing persists throughout. Everything about this brew's appearance screams "stout."

Aromas of coffee and dark chocolate are followed by roasted malts and graininess.

Coffee is the dominant note on the palate as well, but it is not a bitter brew--this is reminiscent of a milk stout. Sweet coffee notes, dark chocolate, and hints of dark fruit. The balance comes from roasted grain and light yeast notes. The ABV is extremely and remarkably well hidden, manifesting in a sweet warmth.

This is one of the chewiest stouts you can find. But the carbonation is a fine balance on this point. The booze finishes with warmth and lift.

This isn't my favorite stout, but it is one I will seek out again.

This is an utterly black, with a thick tan head. The aroma has licorice, dark malt, intense fruit, and and grain. There is an underlying light sweetness. Boozy. The beer is roasted and very malty....at times it tastes like a barley-wine. Full and intense. Very good.

mouth is around medium, a little thinner than expected. nice and roasty on the finish.

overall, another beer that's been on my wish list for a while, and this does not disappoint. happy to have another 3 in reserve.

Well ladies and gentleman here I am. Beer number 750. Officially three quarters of the way to a thousand. Only took me 9 months of heavy activity,followed by two years away from the site, and heavily active since this past July to come to this point. Hoping to at least hit 900 or so before another stint of inactivity out of pure fatigue. Anyway, New Holland impressed me in the early days and one of their brews held onto my top three for a long, long time. So what better way to celebrate a beer karma milestone. Let's do it.

Look - From the twelve ounce bottle hard poured into a snifter glass. This brew pours dark and mean like Lucifers shitty asshole. Black though still penetrable by the lighting in the room. The head fills about four tenths of the glass and it is a moderate mocha in nature with a moderate density packing it together. Carbonation is unreadable given the depth thought the bubbles atop the swill are slight. Lacing and stick isn't quite canyon level, but it is strong upon a finished glass nonetheless.

Smell - Not really getting a whole lot of coffee surprisingly.I think coffee is an overused term when it comes to imperial stouts. Rant over. Anyway, verrrryyyy hop forward with a nice touch of alcohol and fruit aspects. Almost smells like a tenfidy, only a bit better though with a bit of alcohol to offset a more positive rating. Touches of vanilla as well.

Taste - Alright is this thing a TenFIDY in disguise?. You get a huge wallop of hop and burnt malt to start things off followed by just a kiss of alcohol. To round things out, there is a bit of smoke and an ever present smack in the face of vanilla to further the profile. The alcohol is surprisingly smooth given the fact this beer is almost 12%. Honestly yes the alcohol is there but it is smoother than a 5'2, 118 pound French girl trying to get your pants off in her hotel room. Like damn is this shit smooth. Also there is thankfully no overly boozy or oak aspects since I don't feel either would compliment the flavors in this beer.

Feel - I feel the body suffers just a bit. It isn't as full or viscous as I was hoping. I was genuinely thinking this aspect would straight five so what I meant by the above lines is that it is still incredibly smooth and moderately bodied, with a ton of pillowy cream alongside an appropriate moderate level of carbonation, BUT...it simply didn't attack exactly as strong as I was hoping. All flavors retain with even more vanilla as it sits.

Overall - This is not a massively overly aggressive stout with enough roast to satisfy Smaug. However, this is a very tasty, very well done Imperial with enough flavors to make anybody wanna get a few domestic violence charges. Reminded me a lot of TenFIDY with the über aggressive hop level toned down allowing for a more balanced drink. Even the alcohol presence was more tolerable despite the higher ABV. This is basically a perfect 11.5% imperial stout at only $4.49 for a single. If this weren't the last one, I would drive out there now to purchase the rest. Really lucked out with grabbing this guy. I want more. Now. New Holland, MAKE AND SEND OUT MORE YOU BLIMEY FUCKS.

Appearance: Doesn't pour super dark, but its quite black as it sits. Really nice head and lacing.

Taste: There's considerably more bitter roastiness than I expected from the aroma. Dark chocolate malt and a bit of booze.

Pours a dark black w/ a nice two finger chocolate colored head. Smell is that of chocolate, coffee, alcohol, caramel, malt. Taste is great- Chocolate, coffee, alcohol, slight fruit flavor. Nice smooth aftertaste, w/ a slight alcohol burn that lingers. This isn't as thick a beer as i was expecting, but the taste more than makes up for it. I like that you can taste some of the alcohol too. A 10.8% beer needs some of that (just my opinion). A big tasting beer that goes down ridiculously easy. Mouthfeel is nice- very creamy with some sweet, mostly bitter vibe to it. Impressed by this beer. I'm glad the Washington DC area is now getting New Holland brews!

Got this bad boy in a trade with GODofALL.

A - black color with a fairly small tan head that fell to a ring.

T - roasted maltiness, sweet, then bitter, then back to sweet again. Alcohol is somewhat noticable.

A - black with zero light coming through. Short tight brown head that didn't drop for a while.

T - chocolate with mild roasted malts. Downside, there is a strong alcohol flavor.

M - decent coating with light tingle on front of tongue. Rather strong alcohol burn in throat.

This brew would probably be MUCH better aged.

Appearance: Pitch black and viscous, only a small bit of carbonation and a slight head but with good retention.

Mouthfeel: Heavy but not overwhelming. Chewy. Hard to taste the alcohol.

Drinkability: The low carbonation and sweetness of the drink make it relatively drinkable, but with almost 11% alcohol, it's probably best to approach with caution.

A - Deep black with a thin layer of medium brown head.

S - Rich cocoa and coffee aromas up front with a big sweetness. Some molasses and brown sugar notes in the background.

T - A big roast presence up front with an abundance of cocoa and coffee notes. There is a fairly substantial warming alcohol presence and a fairly big bitterness are also present and help to somewhat balance out the big sweetness. Molasses, brown sugar and a hint of smoke in the background.

A bottle my wife brought home from a work trip.

Poured into my Allagash tulip The beer forms a dense tan head the resides to the glasses edge quickly. The color is a dark dark brown black as it pours.

The aroma is sweet malty with a hint of roast. There is a noticeable amount of alcohol in the end.

The taste very malty, very sweet and a lingering creaminess on the tongue. A fair amount of chocolate. There is a strange almost soapy finish that makes this undrinkable for me.

This is a below average imperial stout at best. i would choose a Old Raspy any day of the week over this, not sure why it has such a high rating.

Awesome look. Smell the roastyness, but the alcohol now was still very heavy and warming. Should have cellar'd. I could see 6+ months really dying down the alcohol warmth.

22 oz bottle into a snifter.

Pours an inky jet black with a finger of burnt mocha tan colored head. Retains nicely around the edges at first but then quick fizzles out leaving behind a smattering of lace at first and then a great looking oily brown residue. The aroma is heavy and sticky with tones of chocolate and dark fruit sweetness, coffee, some licorice, and a waft of heat.

The taste is bitter roasted malts up front, melding into silky smooth chocolate sweetness with some zippy coffee notes and dark fruit tang. The mouthfeel is the real highlight of the beer for me, as it posesses a full, rich, creamy feel while still being sticky and viscous. There is a bit of beefy alcohol presence as well that does have a slight sting to it, leaving the palette drenched with a hot and sticky feel.

This is a pretty good fresh offering from New Holland and I'm glad to see them adding to their lineup of big beers. While it's packed with a ton of flavors that I love in an RIS, it's heat profile still keeps the drinkibility a little lower than expected. Even with being a sipper, it's a steady one at that, and I really enjoyed this bottle. This is worth a try if you run across it.

Bomber purchased at Brawleys poured into a Dogfish Head Snifter

A- Deep black. Nice decent sized head that stays around throughout.

S- Roasted malt and thats about it. Pleasant smell though.

T- Nice roasted malt, chocolate flavor. Some coffee and hop bitterness on the back end. A lot of hop flavor for a stout. Very good though.

M- As people have previously stated, it's silky smooth.

D- Very good. Alcohol is hidden well and not noticeable at all.

I've always passed this beer up at the store and that was a mistake. This thing is very good and very accessible, which is a plus. This is one of my favorite stouts that I can get regularly.


Night Tripper from New Holland Brewing Company
Beer rating: 92 out of 100 with 1024 ratings