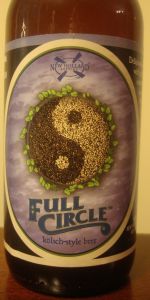 New Holland used to be one of my favorite breweries back in the day when I was still new to this craft beer game. Overall I still enjoy a lot of their beers but there are usually better ones out there in the respective style. Found a single bottle of this for $1.79 at my local Meijer and figured why the hell not. Let's drink it.

Look - From the twelve ounce bottle hard poured into a pint glass. Beer pours rather murky, not exactly typical for a Kölsch but hopefully means there will be some more in the flavor profile. Head is about a finger in height and quickly dies down to a moderately thick ring around the edges and starts leaving small amounts of immediate stick. Carbonation appears to be on about moderate.

Smell - Starts off with a lot of pilsener like malts. Smells more like a German Pilsener than any type of Kölsch. Bit of creamed corn and a touch of skunk which is surprising as the beer is rather fresh and in a dark bottle. Not a massive nose, and seemingly not much to style.

Taste - This beer is definitely skunky to high hell. Lots of corn like flavors that are rather creamy but it certainly isn't anything to write home about. Not a very Kölsch like flavor based on past experiences with the style.

Feel - The feel on this brew fits what it should. Medium thickness in terms of the body with a creamy feel overall thanks to the remaining cap. Carbonation is about moderate and the beer is skunky as hell on the tongue. Swallows with skunk bitterness.

Overall - A brown bottle beer from a few dozen miles North of me brewed about a month ago that tastes like a green bottled beer brewed a year ago from overseas. If that is what you're looking for, pick it up. Otherwise, pass for sure in the future ...

Appearance is slightly hazy straw-gold with a rocky off-white head that dissipates quickly but lingers on the edge of the glass. Aroma has some awesome noble hop but German malt dominates the glass. Same for the taste but the hop and malt seem to dance with each other nicely. There's some mineral quality to the water here that leaves a bit of a carbonic bite on the tongue but it's not overcarbonated. This beer goes down smooth and is quite refreshing. I definately will seek this one out again.

A: Pale golden color thats a bit cloudy, but not much it's almost clear. Not much head here, poured a half a finger then it went down to just some big bubbles scattered here and there.

S: Faint hops, lemon grass. Not much there and whats there is very fresh smelling.

T: My first kolsch, that I'm aware of. A very balanced beer to the point its almost neutral. I get a hint of hops and clover at the get go, and then maybe a bit of malt and raw grains. Finishes with a nice dry hoppy bitterness. This beer is really refreshing. There are some citrus notes in there as well.

D: Very good. Where was this beer when I was drinking Coors light and pitching bundles of wheat up to be stacked in the wagon. a good summer work beer for sure.

A- Lucid is a crystal clear, auriferous golden brew. The foamy, ebullient head recedes to a thin layer, leaving behind a few sticky white curtains clinging tentatively to the edges of the glass.

S- Grassy fields and lemon trees swirl around a bitter-sweet key. Hops are bold and assertive, lingering on the nose like a siren's call.

T- Citrus and spice first reach the palate, astringent with sweet notes of cinnamon dancing on the tongue. Finishes with a mild hoppy bitterness that beckons another sip.

On tap at the brewery during my visit there within the past week into a clean, clear pint glass.

A Light yellow body, little head which forms a ring around the top of the glass (a full circle, no doubt!). 3.0

S Not much smell really, some barley malt is about it. 3.0

D Good but this beer does not provide enough interest to me to return. 4.0

A - looks pretty good, clear yellow
S - grainy and malty with a scent of lemon; reminds me a lot of a pilsner smell
T - crisp lemon and wheat, with a grainy taste as well; nothing too strong or overpowering
MF - a bit thin and hard to notice
D - this was a refreshing kolsch summer beer. Glad I was able to try this.

Golden with a head that quickly dissipates.

Nose is a bit grainy and biscuity. Sort of faint.

Taste is bready and grainy. Reminds me a bit of a pilsner and a bit like cheerios. Not too much this side of your average macro though.

Mouthfeel crisp, not much carbonation.

Washed down food just fine, but doesn't really stand out.

Carbonation is good. Color is nice. The aroma reminds me of wet hay. To be honest this is not a style that I enjoy. A co-worker gave it to me to try. Its great to have people share beer with you. That being said I do think it represents the style very well. If you like this style it would be a nice beer to pick up. Cheers all have a great day.

A: Pours a straw yellow with pristine clarity and slow moving carbonation. Short head forms and dies to a fluffy skim. A decent patching.

S: Sweet and crisp. Very pils like. Even a touch of snappy Saaz.

T/M: Light and refreshing. Saaz are there but lightly in spice and bitterness helping to keep is easy. A very small touch of yeast in the back. Malts are light on the palate with just a bit of sweetness.

D: One of the easiest drinking beers I've ever had. Great for sessioning. I think this was my first of the style and it definitely makes we want to seek more out.