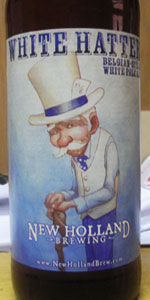 I picked up a case of this for just under $10 at my local go to (something about distributors changing hands). For that price I had to jump, and I'm happy to report that I'll probably be going back before they run out to buy another case or two for that price.

Appearance: Pours a nice goldish red, an average colour for a pale ale. The head is off white, large bubbles, and falls pretty quickly leaving next to no lacing.

Aroma: Definitely different than anything I've ever smelled before. I guess I'd say it smells like it should, like a cross between a wheat beer and a pale ale. Lots of citrus, a bit of clove spiciness like you get in something like blue moon, and the tiniest bit of hops.

Taste/Mouthfeel: Tastes like you poured a blue moon into a pale ale. A decent bit of spiced wheat, some nice malt, very little hops. Feels like a low/medium carbonation with a bit of a creamy feel to it. Nothing offensive, but nothing special either.

Overall: Definitely an interesting combination. I think if the wheat flavour had been toned down, and the hops bumped up, this would have been a pretty damn good beer. As it is it is only a decent beer. For the price though, I'll drink it and be happy.

White Hatter pours exactly what it should be : an apricot/golden color with a tall, frothy, almost cappucino-like head. And it just stays. Forever.

Hits hard with the bitterness of an IPA, but takes a soft curve treading gently ending with plush notes of wheat, coriander, banana, and bubblegum.

Delicate, yet plump with fruit and juices, soft as a feather on the palate, very polite and mild carbonation, and a sticky semi-dry finish.

Why hardly anyone else isn't raving about this beer is beyond me. This is a world class offering and totally worthy of merit.

Appearance is a cloudy light golden brown color with a half finger of head that dissipated quickly. The nose is pleasantly hoppy. The flavor profile is mild with light malt and a dry slightly hoppy finish.

This offering makes for a nice smooth session beer on a warm summer day but there is nothing extraordinary here.

I might have to try this again but not impressed.

Serve on tap in a tulip glass

This beer pours hazy orange with an underwhelming white head. The beer has a ligt fruity aroma from the hops. This beer is all about the hops. The hop profile is really mid country, there is a lot of pineapple, orange, and lemons zestas well as a lot of other fruity notes. I did not get much of the "white" aspect of this beer but I bet it would be easier to differentiate by doing a side by side with the classic mad hatter. Drinks really easy and quite refreshing. A great white IPA, if my memory serves me right I like this more then the original but I didn't have the original fresh from the tap.