Public at the Brickyard 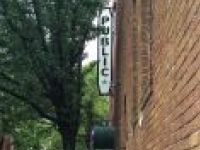 Sat at both the bar and tables during my many visits. Can have as good or better tap list than Anchor. Definitely an alternative to the Anchor.

V- A below grade/underground bar. Typical pub/bar atmosphere. Bright. Music NOT too loud. Small bar but plenty of table space. Mainly concrete and brick. Maybe a bit too dim for me. A separate beer menu, but they don't always update it daily. 3.75

Sel – 12 beers on tap. 47 bottles. Yes they have Bud and Coors, but also Orval, Kasteel. Multiple Lindemans, St. Bernardus, Boulevard, Lagunitas, Nebraska, Prairie and Deschutes. Their Abyss keg had just kicked (bummed about that). Need to pay just a bit more attention to the beer - don't have enough taps to let one lay fallow! 4

Ser – Good service nice attentive wait staff. Young bartenders seem to have a decent grasp of the beers they had on tap. 4

Q – Serve beers in misbranded glasses, not a big deal to me but for some it makes a difference. Glasses not always completely clean. 3.5

F – Had an excellent short rib stew and cornbread. The grits and shrimp was not as good as the bartender claimed, but passable. - 4

Rated by jamesgaither from Kansas