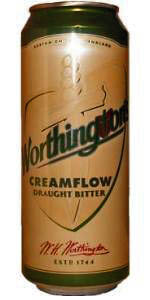 Had Worthingtons whilst in Dubai. The beer was a clear golden color with creamy head. The smell was mild, slight bitter hop. The taste was very smooth, very drinkable English bitter. The mouthfeel was medium in body with almost zero carbontation....which I did not like. Overall it was a drinkable beer....but one was enough for me.

440ml Can poured into a Hobgoblin branded pint pot.

A. Amber, almost red in colour with a tight, almost smooth, 1 and a half centiimetre thick white head.

S. Fruity malt on the nose. A tiny whiff of red fruits - strawberry or cherry perhaps.

M. Smooth and very light, weak tasting, still it is one of the better canned UK beers I have had.

D. Very easy drinking beer. Nothing special to comment about. Great for sinking down quickly on a hot summer day to quench one's thirst as there isn't much to savour in this one.

Had this off of a nitro-can shipped in from the UK thanks to a friend.

To love: Clearly lives up to it's creamy billing.

To like: Fairly easy drinking beer; goes down smooth and fast. Satisfying as a traditional pub ale should be, but not particularly refreshing.

To improve: Pale flavor, with a light hint of apple or some similar fruitiness. Compares loosely to Boddington's from the can as available in the states.

On a recent trip to England, this was the only ale I had that I didn't like. And then I came back home, looked up all the beers I had had there on beeradvocate, and discovered that this one is made by Coors. Hah!

I got this at a restaurant whose menu offerings of draught beer were simply "lager" and "bitter". So I ordered the bitter, and my girlfriend ordered the lager. But since I like to keep track of my beers, I had to get up and go look at the taps, where I discovered they had Worthington's Creamflow and Carling (which also turns out to be made by Coors).

Anyway, this beer was very weak in flavor, had a smell a bit like raw beef, if I recall, and was generally pointless. It's a shame, too, because the food at this restaurant was really very good, and the restaurant itself was quite charming (old Tudor building).

You know, i really like the appearance of nitro beers and this is no exception. The pour produced a hazy deep reddish brown beer, with an inch or so of creamy off white head and no visible carbonation. The smell on the other hand was not impressive at all, a slight malt sweetness is barely discernable if anything. The taste is also quite bland, there really seems to not having much going on with this brew. You could taste some malt sweetness, and very little bittering hops, but its all so subdued that the beer seems like it has no character whatsoever. On the positive side however i really enjoyed the mouthfeel, its creamy, and very smooth. Given the right taste the mouthfeel could promote pretty good drinkability, but as it as, the beer is just too bland for me to want to down more than one. Overall, im not very impressed and its unlikely that i'll pick this one up again.

Pours very much like I remember a Pint shoul dlook froman English Pub. Deep brown to dark amber with next to no bead but a creamy head that sticks there throughout.
Could not detect much on the nose at all
It has sweet aniseed flavours that dominate a smooth tasting beer , however the big introductiondisappears to unfortunately ,nothing, or very close to it.
There is some sweet malt there but it is all very suppressed.
The brewers claim it to be cramy smooth which it is however the lack of carbonation or any discernible bitterness makes it all just a little dull.
In the end I was disappointed.It is one dimensional albeit that dimension is ok .
There are plenty of English Draught Bitters I would drink in preference to this.