Citra IPA
Other Half Brewing Company 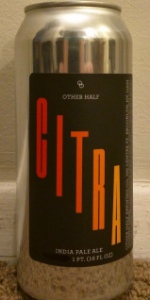 Fresh, flavorful and loaded with pineapple, lime, mango, orange notes...OH continues to churn out a load of high quality cans every stinkin' week...great stuff, go get some

S: Not outrageous on pop of can. Aroma has mellowed over the past couple weeks. Sweeter tropical melon, twist of lime, pure orange oil. Earthy, woody grapefruit with cedar.

M: Pleasant citric snap. Dusty comes to mind, but the body is pretty light, and the carb is moderate so it doesn't come off crazy big in body.

T: Orange-tangerine heaven. Doughy malt really persists; a touch of herbal, vanilla sweetness comes from it. But it's really quite musky, dank and earthy. White grape, lychee fruit, and a hefty dose of lime to finish.

Poured a nice hazy orange color with a white head

Other Half does it again! Another great IPA!

On tap at Other Half Brewing in Brooklyn, NY.

This one pours a bright hazy and sunny orange, with a tight head and a good amount of lacing.

This is undeniably delicious. There's so much dank fruity hop flavor, with a huge melon, pineapple and orange hop flavor, some cannabis like dank mess, and a mild but satisfying bitter finish.

This has a medium body, with a crisp and very juicy mouthfeel.

Outstanding. Near the top of its class.

Poured from a 32 oz growler into a tulip glass.

The pour is a hazy, golden orange color with a small white head. Not much retention but the lacing is legit.

The aroma is citrus or something. But seriously, this beer smells like an orange grove and I love it. So much orange and even a hint of pineapple. The grainy malt hides in the background. Not a lot of complexity but I don't care. This beer smells like orange juice heaven.

The flavor starts out with orange and grapefruit, then a bit of dank, garlicy hops. The malt is doughy and spicy, and adds an almost rye-like character to the flavor. I love the flavor, but it is unfortunately a bit on the lighter side.

The feel is medium-light bodied with moderate carbonation. Very light and crisp, and very refreshing. A slight lingering bitterness on the end.

Overall, this is my favorite IPA from Other Half. It's not really complex or well-balanced, but the flavor and aroma are just fantastic. The only downside to this beer is that it is pretty light in body and in taste. It drinks more like a citra pale ale than a citra IPA. Regardless, it's fantastic.

Poured from the can into an Other Half tulip glass.

Look - Pours a hazy orange with a nice foamy head and little to no lacing.

Smell - This beer literally smells like fresh squeezed orange juice with a hint of hops.

Mouthfeel - Just the right amount of carbonation. This beer goes down very easily with almost little to no bite.

Overall - Probably the best single-hop release from Other Half. It's truly a deadly beer to drink as I can probably crush a 4-pack of this in an hour. A very well done IPA!

Picked this up Saturday along with the other releases, having never had this before and psyched to see the date on the bottom as 2/26. After also having the Equinox and the Simcoe single-hop IPA's from Other Half, it's obvious that this easily surpassed them when it came to the taste, mouthfeel, and overall enjoyment that I felt when crushi-er, drinking this today after last night's slow-as-molasses shift at work!

Nice pour to this, as the beer had a glowing, golden hue, plenty of head, and a nice haze to it as well. Lots of citrus in the nose with even more in the taste, right from the get-go. Way to feature this hop as the juice, pulp, and rind of orange, tangerine, and grapefruit were all found here with the latter standing up over the others by a considerable margin. Juicy to the extent of nearly being waxy, this has a wonderful mouthfeel on par with a beer from Treehouse. Subtle earthy hops, lime, and citrus pith came in afterwards with a slight burn underneath everything, that I felt while resisting the urge to pucker up!

The alcohol was on par with Other Half's IIPA's that I've enjoyed as it was enough to match the potency of this without having any taste or distracting presence during my enjoyment of this. For all that the flavors that this packed, the slightly doughy malt and lively carbonation balanced them out quite nicely. I always wonder how a particular brewery can have a zillion IPA's in their lineup but Other Half seems to get it right as no two that I've had so far were quite alike and this one stood out as one of the juiciest that I've ever had. Great stuff that only ups the ante for competing brewers!

Pour at Other Half.

This one didn't do much for me.

While there's a wealth of grapefruit pith and zest to the aroma and flavor of this beer, there was also dirty sock and onion.

The feel suffers a bit too from the thick, yeasty unfiltered-ness, which along with the bitter, grapefruit peel bite, made this tougher to drink.

Not my favorite from OH.

On tap at The Jeffrey during Other Half tap takeover. This is, not surprisingly, one of the best Other Half single hops I have had. It is hard to go wrong with Citra, but Other Half did a really nice job with this one.

Poured from can into tulip. Canned 9/25, drinking on 11/02. I let one mellow, but this one was a bit better fresh. A tangerine orange hazy body. No head but some lacing. Some nice fruity aromas, grapefruit, pineapple. Taste matches. Good beer, solid example of the Citra hop, although I've had better. Most notable HF double Citra which is pure candy and incredible.

Poured a 16 oz. can into a tulip glass. Pours a light golden cloudy color with a very thin white head that disappates quickly and does not cling to the glass. Aroma is Pure Citra, my favorite hop! Citrus, grapefruit, kiwi tropical hints hits the nose. Taste is a little bit subdued, was hoping for more of a powerful Citra hop taste but still very good. Can't believe it's 7% ABV. Mouthfeel is very crisp and light but not enough head and a little too light. Overall an excellent offering although I enjoyed Otherhalfs Amarillo more as well as Kanes Citra which may be my favorite beer!

16 oz can. Pours hazy yellow gold, thin head fades quickly. Mild citrusy aroma. Taste is hop forward with light malt backbone. Grapefruit and lemony citrus peel is dominant up front, with pine and a touch of earthiness in the finish. Thin but soft mouthfeel. Very easy drinking, clean, light bodied hoppiness, drinks lighter than the abv, dangerous. Glad to get to try this one.

What a great way to showcase citra hops. The pour is an awesome shiny bright yellow that glimmers in the light, with a nice murkyness to it. The nose is ok, not as amazing as I've smelt from other single hop citra's before, but acceptable. The real remarkable part of this beer is the taste. Wow, this is the best representation of the different flavors citra can impart. The first thing to hit your palate is a melange of citrus, and it is in your face and wonderful, followed by a crescendo to a limey bitterness that eventually turns into nice pine trees. Covers the whole realm of flavors that comes from citra. Nice creamy mouth coating but still crushable feel.

Wow. Tgis may be my favorite OH brew after AGE. The flavor has that dank effect you excpect from the Citra hops, but it also is bursting with mango, guava and citrus. Might be my favorite citra only IPA so far.

Very aromatic - popped the can and an orchard emerged from the can. Primarily citrusy; I don't get much grain, much herbaceousness. Head leaves little lacing though the foam cap sticks around for a while. Flavor lacks depth, moderate bitterness. Flavor and feel are quite light, reminscent more of a session IPA than a regular. Solid but not superlative.

Poured out of can. Very hazy and orange look to it. Great smell. Taste of grapefruit to start with a nice piney finish. Has a nice bitter bite. A really good IPA.

L: beautiful hazy glowing orange with a nice creamy 1" head that fades with some lacing. S: heavy notes of citrus and fruity esters. Huge guava, pineapple and grapefruit. T: starts off with a bitter pithy grapefruit that is traced by a harsh bitterness and a hint of booze (the next can i had was smooth and no booze flavors at all). M: crisp and smooth. Perfect carbonation. Slight bite from the bitterness. O: another amazing offering from Other Half. Not quite as amazing as their Mosaic IPA, but damn close. I'll have this any time.

Poured from fresh growler into tulip.

T - perfect balance of sweet and bitter, lots of citrus and pine, more dank than I'd expect from citra, but a lot of OH beers seem to be dank, long finish

Other Half did this single hop RIGHT. Got them fresh from the brewery at their Saturday can release. in a glass, it is a hazy, beautiful lighter orange/yellow color with a head that retains pretty well. smell is straight citrusy orange goodness. the taste matches the smell, and then some! not light and balanced like your typical IPA, but thats the correct way to do a single hop. they showcase the Citra hop extremely well. slight malt backbone to finish off the fruity taste and carbonation was perfect. even the cans are dope looking! cant wait to try more of their single hop series because they truly know how to put single hops up on their own pretty little pedestal!

Pulled up the overall here because I love the citra hop profile. Orangey pour, and the malt backing masks the bitterness. Well balanced, and very smooth.

slightly thin on the taste, that has to be my only complaint. awesome unfiltered look, reminds me of Trillium goodness, the smell is heavenly, lots of orange juice on the nose. Taste and feel is a bit thin and muted, I feel like they could go bigger here but overall a great IPA, nothing to be taken lightly, this is a really awesome beer.