Amarillo IPA
Other Half Brewing Company 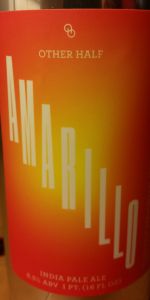 Picked this up at Other Half when it was released last month. The date on the bottom of the can was 9/23 and had "Pretty Daddy" written above it, in addition. I like most of the single hop beers from these guys but this one may have been my least favorite. It wasn't that this bad or undrinkable, but that it seemed too typical and unremarkable to me. This was one of these beers that gave you what you're looking for but didn't break any new ground or surprised me in any way.

If you like your beer to resemble dank, fermented orange juice, than look no further. The pour to this had that appearance with enough head to measure up to the hazy appearance of the liquid. There wasn't a lot of lacing left behind as this beer was a bit thinner in consistency than I anticipated. Lots of orange juice, citrus pith, and fruit rind in the nose with even more in the taste. An onion and garlic-like taste to the mouthfeel made this quite acrid with some citrus sweetness and floral spice tossed in for good measure. Medium in body, light in carbonation, and juicy all the way through, a hint of hop oils lingered on my palate long after the liquid went down, with a metallic, earthy burn from the hops left over for good measure.

This felt stronger than it was in actuality as the alcohol could be felt near the end of my session. I never tasted it and the flavors, slightly muddled as they were, meshed together nicely. I can see why people enjoy this but for me, it's something to try once. Amarillo hops are found in so many beers that this didn't seem that noteworthy to me but like most of Other Half's offerings, this was a solid beer worthy of a go at least once; although so many other recent releases easily overshadow this.

Poured from a 16oz can. Pours orange with some haze. The aroma is citrus oranges and tangerines and taste is very similar...very strong orange/tangerine flavoring. Overall a good single hop IPA. If you like orange flavors, this is the beer for you...

Poured from a can a very hazy golden color with a bubbly head that slowly disappears. The nose is all hops with orange and a little bit of spice. Juicy orange citrus flavor with a nice bitter finish. The feel is medium with a slight resin and decent carbonation. This is another solid IPA from Other Half Brewing. I like single hop IPA's and the Amarillo hop is one of my favorites.

This beer pours a very cloudy golden orange reminiscent of OJ. More cloudy than any other OH beer I've had. The head is one finger, frothy and bright white. Retention is excellent and there is a bit of chunky lacing.

Taste is the same. Starts off fruity and juicy and transitions seamlessly to floral hops and finishes piney with moderate bitterness.

Feel is light yet resinous. The hop oils stick to your tongue long after you finish the sip. No alcohol present.

Overall an excellent beer. I love the trend of the fruity/juicy IPAs, but my favorite ones incorporate some piney bitterness as well (TH Sap comes to mind). Amarillo is not my favorite hop, but this beer is great.

16oz can. Pours a hazy burnt orange color with an inch of frothy head. Some lacing. The aroma is orange, tangerine, and some pine. The taste is sweet orange and tangerine with some honey and pine. Floral hops towards the end with some dank hops, melon and lemon peel. Lots of carbonation with an oily mouthfeel. Pretty good single hop IPA.

A: Lots of hops with a super citrusy, slightly spicy, orange aromas.

A: Very pale straw color, super hazy, with a thin white head that quickly recedes to a ring around the glass.

O: Very tasty; the beer has a great citrusy orange hop aroma and flavor. The juiciness is refreshing, coupled with the low-hop bitterness makes the beer very easy drinking.

Overall quite good but not my favorite strain of hops.

Had on tap. Hazy yellow body with a white cap. Huge citrus aromas cascade into a wealth of dank and piney hops. Taste has juicy fruit up front and hops out back, more cut and dry than the smell. Feels very smooth, hazy, bright yet has plenty of hop bite. Good stuff

A touch more pine than I prefer and definitely sweeter than I like my IPAs. A very nice beer, if a bit underwhelming compared to many of their other offerings.

He nose is incredibly dank, and almost comes off as pickled. Very unique smell. Hazy straw in color with eggshell colored nose. Big bold crisp flavor sports citrus and dry floral notes. Nice dryness to the finish and super drinkable. This is a IPA that shines far more uniquely then others.

on tap in glassware, look was a original unfiltered yellow gold, absolutely no amber or orange to be seen, this made the beer desired, smell was very hoppy with pineapple and pine, taste was of something different w lots of pine and a different flavoring, feel was lighter and low on the carbonation, very drinkable. like the different style of flavoring

This has to be the best single hop representation of Amarillo I have ever had. Lots of juicy citrus, orange showcasing, with some slight lemon and nice grapefruit on the finish, and don't forget a touch of pine in there to. Nice mouthfeel, beautifully unfiltered and creamy, one of my favorites from OH to date.

Pours a nice golden color with thick head at first but dropped quickly. Aroma of citrus and melon maybe hints of floral. Flavor is light on the malt and heavy on the citrus & melon. Hop oils dance on your tongue with med+ carbonation. Feel is on the lighter side with no real sense of the alcohol. This rating would be higher but I like amarillo better mixed with other hops than by itself. Still a really tasty IPA.

A - Poured into my Duvel tulip a slightly hazy light gold hue with a fat two finger white head that fades slowly to leave sticky side lacing and a creamy blanket.

T - Taste is similar to the nose. Loads of dankness and musty hops. The pine is still there along with loads of orange and lemon peel. Finish is VERY light on the bitterness.

M - Mouthfeel is lightly carbonated, faint bitterness. Feels just a bit on the thin side though.

O - Overall, this was a solid single hop offering, even moreso for having a month and a half on it. Do wish the mouthfeel was a bit better but all and all a solid IPA.

Unfortunately Amarillo is not my favorite hops. Murky orange color, all hops on the nose, taste is bitter with some refreshingness, but the finish is a mild bitterness. A solid made beer, just not my wheel house.

Pours murkier than any other Other Half beer I can recall.

Tastes fruity and has that peanuty taste I like that I occasionally detect in OH beers. Very drinkable.

This is a very good one, close behind Mosaic as their best single hop beer.

Taste: Citrus with some melon. A very slight bitterness on the end to balance the bright fruitiness out.

Overall: Another great single hop showcasing from Other Half.

Bursting with tropical fruit and juicy hop flavors, this ranks high in Other Half's single hop series. No lingering bitterness but instead leaves a fresh fruity taste in your mouth long after it's gone. Between Amarillo and Mosaic, it's a close call.

16 oz can. Hazy golden orange color, thin white bubbly head fades pretty quickly leaving rings of lace. Citrusy aroma. The taste is full of juicy citrus, orange, with only a touch of malt sweetness. Floral dry finish that lingers the perfect amount. Medium mouthfeel that has a clean crispness to it, mineral quality that I like. Overall delicious single hop IPA with one of my favorite hops, wish it were brewed here.

picked a few of these up on release day. i was pleasantly surprised by this one. Much more flavorful and aromatic than Hop Showers and overall a superior beer. Everything from OH has been amazing but this one takes the cake.

This beer was absolutely incredibly, possibly my favorite Other Half single-hop IPA in the series (or at worst, 2nd only to Mosaic). It's chock full of tropical fruit, especially in the intense nose. Almost a perfect IPA.

Golden glowing yellow orange- like a spectacular sunset. The nose is straight up Amarillo to the core... The taste is fresh green, grassy, dankness, and nothing but... Sooo good!

Poured from tall boy can into snifter. Canned only a few days ago. Color is a hazy yellow orange, white a white head that faded quickly to just a ring of bubbles.
Big orange flavor, the citrus is followed by what seems like onion, and maybe bell pepper.
Tastes very well balanced, with the flavor profile matching the aroma.
Good mouthfeel, crisp, well carbonated.
After having this and mosaic from other half, I'd say I prefer their mosaic IPA and the hop in general.

Picked up at the brewery on September 12, canned the day before. Other Half is killing it with their single hop series. This is a really nice, balanced, and drinkable IPA.