Suparillo
Other Half Brewing Company 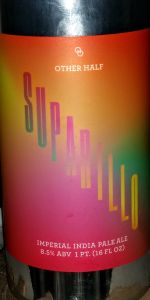 On tap at Stoneyard American Craft Beer Hall and Grill in Webster, NY.

This one pours a slightly hazy orangeish/amber color, with a small head, and plenty of lacing.

Smells quite bitter and resinous, earthy, grassy, very marijuana forward, with a grainy malt aroma as well, as well as lots of grapefruit rind, orange peel, and the flesh of both of those fruits.

This is a very intensely bitter beer here, especially compared to the Simcoe/Wai-iti juice blast I just tried from these guys. It's slightly boozy on the finish, with a very resinous piney bitterness. It's also quite dank, certainly the "hop weapon" that lots of Other Half beers are. Up front, there's lots of grapefruit, and some orange marmalade. Without the booziness on the finish, this would be much better for me.

This has juicy mouthfeel, with a long, lingering bitterness on the finish.

Another very well done IPA from Other Half, but not without a few issues.

16 ounce can poured into a perfect pint glass.

Surprisingly clean for an OH beer. Hazy initially, but also showing some excellent clarity and robust carbonation. Head is plentiful, as is the lace. 4.75

It’s got a healthy tropical fruit aroma complemented by earthy and grassy notes. 4.25

I like the tropical fruitiness of this and the way it’s complemented by what appears to be pilsner malt. Something sweet and bready that reminds me of a fruity cereal. There’s a clear boozy flavor to this that does undermine the overall flavor. 4

3/4 of each sip are highly enjoyable. Then the booze hits in an interesting way, noticeable but not entirely hot. There’s bitterness and earthiness working their way around the palate, but both on their best behavior. 4

The beer smacks of juicy tangerine, orange peel, a hint of caramel and medium bready sweetness. Slight dankness as the beer dries out quite well with a medium bitterness.

Shout out to Ian at The Well for sharing this gem.

3 weeks after release, this one has smoothed out. I wasnt crazy about it fresh, but I had one tonight after jjjuliusss nonetheless, and it was quite good, still lots of melon, but not as abrasive. (Updated on 6/24 from 6/8)

A: Hazy orange core with goldenrod corona. Head is penumbral at best.

M: Medium body. Alcohol amplifies with the bitterness. Has a biting feel, a little soapy.

T: This beer will make you a fan of grapefruit juice, or a grapefruit juice love a fan of beer. The ripe, florally sweet nose parlays itself into a dank blend of mouth puckering tangerine peel and bright grapefruit. Dash of dandelion bitters. And the intense citrus bitterness creates a pine sensation. Other Half makes their IPAS bitter and big and I appreciate that, and Amarillo is unabashed in this regard even if it lacks depth.

On tap at the brewery. From notes. Reviewed 29 January 2016.
4/3.5/4/3.75/4
Hazy brown-yellow.
Light floral nose.
I wouldn't have guessed this is a single hopped with Amarillo. The body is light, fizzy, and resinously bitter. Hint of grapefruit peel.
It's a solid IPA, decent DIPA. Would skip in the future.

This one seems like it would really be good for a hop head. Sadly, that is not me. I appreciate a good IPA, but I need balance. This one was just really bitter and aggressive. Amarillo hops are just a little too dank for me. Good, but not great.

Sample at EBF 2016 Hazy yellow color. Dank resinous fruity aroma and flavor with faint bready maltiness underneath. Good ipa if not a bit one dimensional.

A very light, golden color with a faint almost imperceptible haze or cloudiness. Aroma is slightly sweet malt and clean hops with notes of resin, pine & dank. Taste is very much like the nose, clean floral pine and slight dank. Onion/grassy flavor is rather minimal, if you look for it you'll find it.

Some people complain about juice bombs, I suppose this is a clean hop that doesn't show much of a citrus or stone fruit character.

12/30/15 Canning run. Pours that classic OH turbid straw color. Piney and dank with good body. Not an exotic combo of hops, the thing that separates this offering from other DIPA's is the muted abv making it scary crushable...

This is a lot like all of the other OH single hop series. Amarillo hop is displayed beautifully. Notes of grapefruit, citrus and peach in the nose with just the slightest hint of soapiness. Same fruit presence on the palate with an addition of lemon zest, starfruit and a touch of spiciness in the back. Resiny and a bit sappy on the finish and aftertaste. Really dry and refreshing on the palate and the ABV is nicely hidden.

I'm not a huge fan of the amarillo hop profile on its own but this is a well-made beer. However, I do think that this is one of those times when Imperial doesn't equate to better. The increased alcohol and body doesn't add much to a beer that I'd much rather be able to session.

12/30/15 can into OH Snifter. As usual OH IPAs need some time to settle after canning and this one is now right on the money 2 weeks later.

Delicate but still has a nice bite like IPA should. A very welcome beer after drinking TH fruit smoothies for the last few days, an almost perfect balance of new style fruit haze with a bitter but not overwhelming bite.

L - from a 16oz canned 12/30/15 pours a murky orange with minimal to no head
S - slightly spicy, orange zest, topical, heavy
T - follows the nose with bunches of fruit and a light piney note
F - seems a bit under carbonated but it's still very enjoyable
O - I have yet to have a bad offering from these yanks. This is another hit from the boys from Brooklyn. I just wish the carb was up. Maybe the next can will be different. Enjoy!

From a can dated 12/30/15 Y2K. Typical OH hazy orange pour with a decent white head that leaves a sticky lacing on the glass. Bright citrus aroma and flavor. Creamy mouthfeel, with a with a slightly bitter, clean and grassy finish. Another hit from Other Half.

Can date 12/30/15, reviewing on 1/4/16. Pours a pretty deep orange hazy color, with a white head that fades eventually but lasted a while. Lacing is decent in the wine glass. The aroma is brighter and juicier than the Amarillo IPA. The imperial version still has fresh orange juice, orange rind, little grapefruit. Taste matches, and although there is some vegetal taste present, it's less so than the Amarillo IPA, and this is more juicy. Some subtle pine notes as well. Mouthfeel is alright, this can tastes slightly boozy, although I had others that that didn't really have that.
Overall I enjoy this more than the single IPA. This is a great beer I hope they make again soon.

On draft at Blind Tiger on New Year's Eve. What a treat to have this on draft the same day as the can release. This is tremendous - I love OH Amarillo, but this DIPA version tops it.