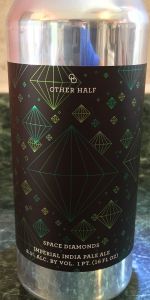 Picked this up the *first* time it was released, as this beer had a date of 8/26 on the bottom with "Bye Bryan" written on top of it. This was re-released a few months later and hopefully, it was just as juicy the second time around. As a few others have alluded to on here, this was reminiscent of the Mylar Bags based on the citrus taste and dank appearance of this and as far as I'm concerned, Other Half has these aspects down as well as anyone else here in these neck of the woods.

It went without saying that the pour and appearance of this beer was as dank as could be - a deep dank straw hue with a decent head and hardly any lacing to be seen once I started to sip this. Lots of stone and tropical fruit in the nose with Other Half's trademark yeast in there as well. Mango, papaya, tangerine, and pineapple in the taste to go with an underlying dankness and a good amount of resin. A bit of champagne in the taste kept this light, funky, and bubbly as the carbonation was plentiful enough to keep this from feeling heavy. Just a hint of resin in the aftertaste served as reminder that this was an American Double / Imperial IPA when all was said and done.

There was enough booze here but it couldn't really be tasted and could only be felt once I finished off the can. While not a bad beer, this was about as typical as an Other Half beer could get. If you're into their other offerings (like I am), then you'll love this, but this offering didn't break any new ground or push any boundaries. A safe bet worth having a go once or twice.

One of their best.

The beer comes in a fully hazy deep gold color.

The flavor follows with tangerine, pineapple, passionfruit, a light biscuity malt, onto a huge ripping rawness on the palate and quite boozy on the finish. The beer is a sipper for that reason, making through 4 oz. of this brew even hard for an 8.5% DIPA. Mouthfeel is seemingly medium to medium plus, but then the alcoholic astringency cuts quite quickly.

Moderate pour yields a one inch white head over a hazy, cloudy, murky body akin to a milky pineapple juice. Some sticky lacing at first and guess what? Pineapple on the nose! Also citrus and some tropical fruit. Taste mirrors nose with a dry, bitter finish. Feel is very strange like most super cloudy offerings these days. Carbonation is there at first and then this thing that a friend in the industry calls "hop detritus" rears its ugly "head" (as in no head) and the carbonation is replaced by a different feel which is not to my liking. Overall, I really am being turned off by these aberrations being produced today. Cheers?

thanks for the can kickdown, anthony...very much appreciated. it's like green diamonds but dialed back...just not as dialed back as baby diamonds...if I was little red riding hood, this version would be just right for my taste buds. a real winner from other half.