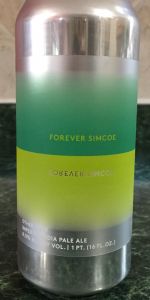 The beer comes in a medium to deep gold, medium plus haze.

The flavor follows with a really soft delicated tropical fruit smoothie with a light biscuity malt in the middle, onto mint, pine, and a bit of metallic dank quality on the aftertaste. The beer is so delicate and soft, without exploding on the palate too heavy on juicy fruit qualities upfront. It is minimal and fruity, and grows and grows in flavor onto the finish.

Definitely a solid DIPA. HAzy/cloudy pour but very tasty. Mouthfeel is probably the best characteristic, not to thin not to heavy, just right. Feels more like a session IPA. Hides the 8.4% well.

Picked this up at the brewery when it was released, as the beer had a date of 10/6 on the bottom of the can with "Not a session" written above it. I like beers with this hop in it and this one wasn't an exception as it was incredibly smooth and had a hidden alcoholic presence.

This had a nice pour to it as the beer had a cloudy, melon hue, fluffy head, and left wonderful rings of lacing as I worked my way through it. Lots of melon, dank rind, and Simcoe hops in the nose as the taste also contained all of those. Lots of onion here too as this was quite sharp but had a grassy undertone to it. Not a lot of sweetness or carbonation here but there was a dank rind that emerged more as this warmed up. The yeast strain found in Other Half's beers was here as well as the aftertaste featured the hops and a wonderful, slick resin that coated my mouth once this went down.

The potency here only was felt via a slight warming effect, as the flavors were allowed to be felt to full effect. While not Other Half's best beer, this was yet another solid offering from them that didn't have a single flaw in it. Worth a go as the Simcoe nearly goes on forever, long after the final suds have gone down!

Pours a hazy pale yellow gold in color with two fingers of fluffy white head with good retention and decent lacing. The first whiff is resiny pine, after the head dissipates i get pineapple and some indistinct tropical fruits. Taste has pine notes that meld with pineapple, mango, cantaloupe, and bubblegum notes; individually these are great flavors but cumulatively they just don't play well together. good mouthfeel, medium body and moderate carbonation. overall a decent beer but the flavors just didn't work for me.

Can shared by Lunch. Thanks Paul.

Hazy yellow body with a soapy, white head that leaves a sheet of lacing cascading down the glass. Aromas of floral melon, cantaloupe, grapefruit. Lovely flavor as well, following the scent. Terrific.

Forever Simcoe from Other Half Brewing Company - Brooklyn
Beer rating: 93 out of 100 with 111 ratings