Broccoli
Other Half Brewing Company - Brooklyn 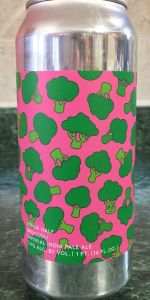 Broccoli?!?!??? I couldn't stand the stuff when I was growing up and seeing it on a can of beer nearly made me get disgusted. Thankfully, this beer only had trace notes of it in the taste as this was one of the more "typical" of the Other Half offerings that I've had. If you love your IPA's to be tropical, easygoing, and dank, this one's up your alley and nearly guaranteed not to offend anyone at the same time!

The pour to this was typical of a beer from Other Half as the murky apricot/peach hue, fluffy head, and soapy web of lacing was in line with what I've come to expect from them. The foam didn't hold up for long and the aroma could have been a bit better as it had dank melon, yeast, and tropical fruits in it. All of those were to be found in the taste along with some crabgrass, candied sweetness, and light Southern Hemisphere hops. The sourness that was underlying reminded me of a certain green vegetable as this had the feel of something along those lines, while still retaining enough hops, yeast, and booze to be categorized as a beer. This was tough to pin down, even with a light body and carbonation though it was a smooth sipper from start to finish.

I felt a bit warmer once I polished this off as there was enough potency here to be felt, if not tasted. While certainly not their best offering, I enjoyed the label and the "Roll Gently" that was written above the date of 12/15 on the bottom of the can. Yes, beers are much more than that but the liquid was in alignment with the package as it wasn't quite like anything that I've had before. The combination of hops ensured that this would be a bit of an anomaly without straying too far from what a good American Double / Imperial IPA should be. Easily worth a go once in between their more memorable releases!

Pours a hazy straw to pale orange in color with a finger of long lasting white head. Aroma is melon, pineapple, and mango. Taste is quite tropical as well, aside from the melon I can't quite pin down the other flavors. The note I drink the more I get some dank notes as well. Medium body, moderate+ carbonation, soft mouthfeel. Overall a tasty beer, I do enjoy Other Half.

On tap at Other Half. Pours a hazy burnt yellow color with very little head. Lots of lacing. The aroma is a mix of tropical fruits, berries, and citrus fruits. The taste is melon, pineapple, stone fruits, and papaya. Medium bodied and slightly boozier than I expected. Overall, a solid Imperial IPA.

can from this recent release, canned March 24th. super juice hazy look... nose and taste are nice balanced hops. have had this before and loved it but since the double dry hop craze, kinda hard to dig other half non double dry hopped stuff...just lacks the punch of those beasts, that said this is a very nice hop.profile and dangerously drinkable. has a nice sweetness that's very inviting.