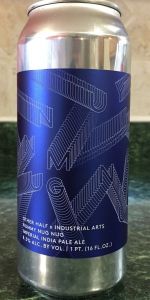 Looks hazy. Almost like mango juice.
Aromas of mango, grapefruit. Pineapple?
Tastes fruity and juicy. Unexpectedly crisp.
Rich mouthfeel. You can't taste the abv, but you can feel it. Not a bad thing.

Amazing overall. No complaints. Glad I got some before it sold out.

First had 2/4/17 at Extreme Beer Fest in Boston. My favorite IPA/DIPA from the fest. Super hazy, turbid, orange yellow fuzzy look. Smells tropical. It's a juice bomb for sure. I could drink a million more beers and not find one as awesome as this!

Thanks Corey. This was poured into a tulip. The appearance was a hazy/semi-cloudy sort of orange to copper color with a finger’s worth of white foamy head that dissipated at a mild pace. Stringy lace. The aroma had a mostly sweet blend of berries, passionfruit, onion, pine and ends with a touch of cracker/biscuit maltiness. The flavor leans to the sweet side with a crisp berry blend to the passionfruit to onion sweetness. Sly blend riding into the aftertaste and on into the finish. On the palate, this one sat about a light to medium on the body with a fair sessionability about it. Good carbonation. ABV felt appropriate. Overall, well worth my time and my buddy’s money. Good thing he got a fair amount of VT beers in return.

Welcome back to New New Half of the Other Glarus Beer Sunday (Week 781)! India This, as well as everything for today, came to me CANtesy of my H NIght Trivia Team, Bert & Dana, not to be CANfused with Bert & Harry of Piels fame.

From the CAN: "Imperial India Pale Ale".

Oh man, I was really diggin' the way that the day was shapin' up, dig? I got a sweet honey honey that stopped by, I scored some heavy dank, she opened some wine … Easy like Sunday morning! Bump Johnny Cash & Kris Kristofferson - this was Sunday morning blowing up, NOT coming down, yo!

Next up was a Nug that m'man guarantees is destined to blow my mind! Groovy, man. Lemme just Crack! open the vent & get a slow, gentle C-Line Glug going. Oooh, that foaming action! It's like that gear that phreek, Broadway Joe Namath, uses on his legs! Baby, I got like just under two fingers of dense, foamy, rocky, bone-white head for my efforts & it's hanging around like an invited guest! Hey, man, this doesn't mean that I gotta shave, does it? There's rumors swirling, man. Color was a deeply-hazy/lightly-cloudy Golden-Amber (SRM = > 5, < 7). Solid, man. Nose smelled like that wild tangerine/orange/grapefruit juice that the squeeze squeezed for breakfast right before she added vodka & called it a "Driver, Screw the Hound Until It Turns Grey"! 8=O Man, this place is freaky this morning! Lemme get some in my mouth so that I CAN lay the mouthfeel on you as the gospel truth as it wafts in through my window from the church across the street. Brothers & sisters, this was righteously Medium! Hey, man, rejoice in its not being watery. Take what thou art given! Bro. Woody hath spoken. The taste was Nummy, all right! It was very juicy, highly citrusy, but not overly bitter. Instead, it was orange & CANgerine that led the way with grapefruit as their backup going through my front door. MY FRONT DOOR?!? Man, it's a raid! I gotta finish this to destroy the evidence! Finish was beautiful, man, semi-dry, cooling my throat as the piggie was using his baton in a chokehold. Lissen, somebody call my mouthpiece, Jimmy Keaveney! He's dahn in Florida, but I have him on retainer. They're taking me to Central Booking on all sorts of charges, but I ain't saying a word. Not a word! Ya heard? The bird is the word! I'm going surfing in Florida when this all shakes aht! YMMV.

Picked this up when it was released at the brewery on the same day as the 3rd Anniversary. Loved the can design for this and the "Half Arted" on the bottom written on the bottom above the date of 1/26, as this beer was a collaboration between two stylistically different places from each other. This was a solid beer that went down easily but not quite as good as Other Half's highly-rated offerings, which still made this very good when all was said and done!

Start to finish, this beer was quite soft as the pour was thin, dank, and apricot. The head was large enough but not terribly long-lasting as the lacing left behind was spotty and scattered all over the inside of my Teku glass. Lots of melon and stone fruit in the nose with a bit of yeast underneath it as they were all present in the taste as well. The mild sweetness, juicy slickness, and mild lemon zest and spice underneath all gave this a summery feel as the alcohol and hops were well-hidden, probably due to the less-than-common hops that were present here.

I love juice bombs and this was one of those that nearly anyone could fall in love with, even if it wasn't close to being a session beer. The weed-like dankness and subtle garlic aftertaste gave this beer a nice nuance that a regular beer of this type would never have, as it was pleasant to enjoy once this was finally finished off. A solid offering that showcased the level of craft that both contributors have become known for. Fun stuff that served as a solid counterpart to the day's other release!