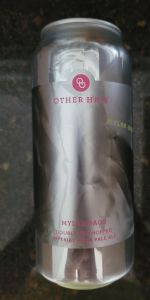 L - opaque, more yellow than orange, not much head

T - all kinds of juice (orange, pineapple, ...), moderate sweetness, pith and earthy bitterness on the finish that's mild at first but builds sip after sip

O - The second dry hopping seems to improve Mylar Bags more than it does the others I've tried.

In a blind comparison, the DDH version was hazier (sort of ruining the blindness), seemingly less malty, less bitter, sweeter, with a stronger aroma of tropical fruit and (of all things) celery. It makes no sense that an extra hopping would reduce bitterness, but I guess human (or at least my) taste perception is just wacky and unpredictable. Some of this could have been the extra week the non-DDH can spent in the fridge.

Canned 3/9/17, it pours cloudy gold sandy color with a 2 finger foamy off white head that faded very slowly and left excellent lacing. Typical great looking DIPA from Other Half.

Tastes even better than it smells, completely hiding the ABV and bringing out the additions of clementine, lemon zest, sugar cane, a touch of wheat bread, caramel and then some sharp bitterness which mixes well with the hops. This is a lot smoother than it should be for a beer over 8% ABV and another excellent DIPA from Other Half.

This one pours a hazy murky yellow-ish color, with a small head, and lots of lacing.

The aroma just blasts your nose out of the glass- tons of tropical fruits, soft and sweet, with a hint of black tea and pine.

This is absolutely great- it's probably my favorite Other Half beer at this point. It's a maelstrom of tropical and citrusy hops, with a small amount of tea-like and piney bitterness.

This is soft, pillowy and juicy, with a good level of carbonation and drinkability.

This is absolutely awesome. This is as good as IPA gets.

One of the best NEIPA out there