Cabbage
Other Half Brewing Company - Brooklyn 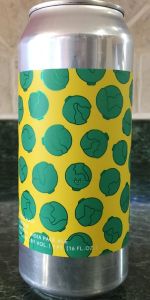 Picked this beer up a while ago at Other Half, finally getting around to it today. I wasn't a huge fan of this when I first saw that it was being released but as I had more of it, it warmed up on me a bit. The hop profile was quite nice but there was just too much of vegetable presence for this to truly rank as one of their better offerings!

The date on the bottom of the can was 3/23 (yes, I know I'm behind!) with "POPPA TWIST" written above it. Not a bad pour to it for being that old as the beer was quite pleasing to look at as it poured a deep grapefruit with plenty of soapy head to top it off. Quite turbid, there was plenty of cloudiness to this though it wasn't quite so dank as a IPA from Other Half tended to be. The nose was faint citrus, bitter and floral hops, and was there some cabbage in there as well? A sweet, soapy, and pithy mouthfeel backed this up as this had to be one of the softest beers that I've had in quite some time. A bit of sauerkraut and onion-like spice made this interesting the but low carbonation and light mouthfeel kept this easygoing from start to finish.

This felt like it had no alcohol in it whatsoever as it went down like a fine juice. Along with the other offerings released with this, this was one of those brews that took a while to figure out and was more nuanced than I could have imagined. It's fun and worthy of the name and label, once you get over the initial reaction to them! I hope this comes out again soon...

Another ridiculously good NE-style DIPA from Other Half - opaque grapefruit juice-like appearance, aromas of dank citrus fruits and their pith, and flavors in kind - grapefruit pith and dank basement funk, plush and smooth, nicely bitter, moderately sweet, and amply carbonated... Another win... Not to be ignored...

Damn!!!!! This beer is lovely in the glass..... looks like orange pineapple juice with a soapy looking head.... The aroma is passion fruit,apricot,tangerines,fruit sorbet with a little earthy bitterness.... The taste follows the nose with all the tropical fruit and ends with a basil like astringent bitterness

Pour is golden and hazy. Lots of head. Smell is grapefruit and wonderful. Taste is also fruity. Smooth also. Dammit Other Half this one is awesome. Looking forward to other choices.

Not that I've had a ton of OH beers but it seems the line is beginning to blur between a few I have had. Pours a hazy turbid deep yellow to orange. Nose is of pine, light floral and a mixed bag of faint citrus. Taste of pine, floral grasses, grapefruit peel, light sour lemon,cracker and stinky cat litter. Feel is medium to boarderline heavy. It finishes with a awkward but crisp bitter kick. Almost need to have another sip to cleanse the palate. Rinse and repeat.

This can and a few other recent other half releases came my way today in an IP swap. decided to pop this one. canned on the 23rd...6 days ago. split with the mrs.

classic other half juicy ipa looks with a frothy cap. nose is sharp hops. mouteka in a big way on the nose and taste w Simcoe bursting on the taste as well giving some drippy resin to the body. solid beer, but not tops for me.

Cabbage from Other Half Brewing Company - Brooklyn
Beer rating: 93 out of 100 with 66 ratings