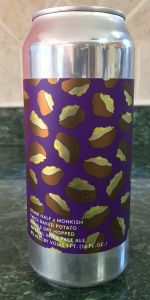 4/5  rDev -8.5%
look: 4 | smell: 4 | taste: 4 | feel: 4 | overall: 4
Yeah, I bought into the hype like this like everyone else. Other Half and Monkish? Accompanying teku glass? Who wouldn't want that? Two blocks worth of lines proved me right as I ended up not even getting a wristband that day. Thankfully, a friend got one of these each for me just so I could see what all of the fuss was about. This was a fine beer and enough to satisfy any of us that enjoy Other Half's stellar concoctions but this turned out to be a mild letdown as it wasn't anything outstanding, to me...

Not a bad pour to this as the beer poured a typical, dank goldenrod with plenty of head on top to boot. To my surprise, there wasn't a lot of lacing left on the side of my teku glass as the were just a few sections of spotty bubbles on the back of it. Onion, vegetables, starch, and grass were in the nose with more of those in the taste. Anyone looking for blistering and addicting hops would be let down with this beer as they were *not* to be found. Mild tropical fruit grapefruit pith, and cream came in afterwards but this never "took off" for me; even as it warmed up. The balance was here as the mouthfeel was full but not heavy, as if the "potato" could only be found when it came to the fullness of this beer.

The date on the bottom of the can read 7/6 with "HIT IT AGAIN." written above it. Since there was enough hidden booze here, that would certainly not be a problem! I enjoyed this but given the lofty standards that the two brewers involved in this have set, this could have been better. Worth a go once but this didn't break any new ground, though it had me craving a loaded baked potato with with broccoli and cheese...

Reviewed by RAlmeida77 from Massachusetts

O- juicy and resinous with some nice leafy green notes