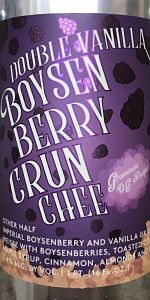 Notes: This next iteration of the crunchee series like eating a vanilla boysenberry parfait.
View: Beers | Place Reviews
Reviews: 7 | Ratings: 15 | Log in to view all ratings and sort
Reviews by cambabeer:

This was a fun one, worth having one time... and was surprisingly not nearly as overpowering as the ingredients would have suggested. Purple body, pink head. The aroma is mostly vanilla, a bit sweet, and tart as well. Sweet but not overly so in the taste. A little dry at the end, maybe from the cinnamon and almonds.

Now, I will say - I hate that this is called, and categorized on here, as a berliner weisse. Maybe marketing is why they feel the need to call it that... but it's just not, and I'm not usually the pompous about style type..... but I digress.

A: The beer is very hazy dark reddish purple in color. It poured with a quarter finger high dark pink head that left a thin layer of off white bubbles covering the surface and a narrow collar around the edge of the glass.
S: Light to moderate aromas of maple syrup are present in the nose along with hints of vanilla.
T: Similar to the smell, flavors of maple syrup stand out in the taste and are followed by notes of boysenberry and hints of vanilla.
M: It feels medium-bodied and rather creamy on the palate with a moderate amount of carbonation.
O: This would definitely make for a good dessert beer given the berries, maple syrup, and vanilla.

Clearly nailed what they were going for. Crazy gimmicky and I’m not sure I’d ever need a second can but fun to try once. Actually paired well with spicy food to offset it with some fruity sweetness. Tartness and sourness is barely perceptible.

Just by the name of this beer, one should expect it to be something wild, chaotic, and eccentric...which is exactly what this turned out to be. I loved the other Crunchee beers and this one was lovable too, once you got past the initial absurd impression that this gave off. Yes, it was a Berliner Weisse (in name) and yes, it tasted like parfait but there was enough underneath that to enjoy once this fully warmed up!

Of course, this had a boysenberry hue to it with a bit of beet red lightness around the edges, which allowed some light to seep through. Raspberry froth topped this off as it was somewhat thick, and long-lasting although the lacing left behind was mostly near the bottom of my pint glass, in an abstract way as a faint ring near the top was all that remained besides that strangely-shaped clump. Tons of fresh boysenberry, vanilla extract, sweet cream, and graham cracker crust were in the nose as the taste was just as fruity, sweet, and grainy as the aroma indicated. For some reason, this completely clicked with me as it was sticky like jam and melted ice cream but solid enough to feel like a true, concocted dessert. Hard to feel the other ingredients here but they allowed this to have depth, a *very* subtle nuttiness, and a lightly baked feel that made this feel like a liquid dessert, and not an actual beer.

Indeed, there was booze in this and I felt some warming but it was enough to complement the fruit and jam without overpowering them by any stretch. Canned on 1/2/20 with "CRUNCHEEEEEE" written underneath it, this might have been the best of those beers of the sort that Other Half has ever put out. While not for everyone, those looking for a Berliner Weiisse taken to the extreme with the carbonation and yeast toned down will be pleased to have this, as a nightcap unlike any other!

Ridiculous but exactly what it describes itself as- so kind of hard to fault it? Literally tastes like a vanilla/boysenberry granola bar. Could be disgusting but is the most delicious version of what it could have been. Fruited milkshake berliner weisse is the right description i guess. A really fun dessert beer

A whole lot going on in this beer. Very complex which usually is taboo a description to use for a beer with a bunch of adjuncts. Reminds me of a toaster Strudel run thru a blender. It actually is kinda drinkable, considering all the adjunct additions.

Pours a deep cranberry color with a finger of pinkish head. The head is gone quickly, leaving a few spots of lacing before settling into a thin halo.

The aroma brings notes of boysenberries, almonds, and coconut. There's some faint cereal grains with just a touch of vanilla.

The flavor is literally a fruit parfait. Lots of boysenberry, granola, vanilla yogurt and almonds. There's some faint cinnamon spice on the finish. Not picking up much maple syrup but otherwise this is exactly as advertised.

The feel is medium-full bodied with moderate carbonation. Creamy and smooth, and a touch syrupy. Very dry on the finish.

Overall, this beer is absolutely ridiculous. Just reading the ingredients makes me laugh. But that said, I still somehow enjoyed it. It literally tastes exactly as advertised on the can, yet is shockingly not too sweet.

vfgccp from New York, Mar 20, 2020
Double Vanilla Boysenberry Crunchee from Other Half Brewing Company - Brooklyn
Beer rating: 90 out of 100 with 15 ratings