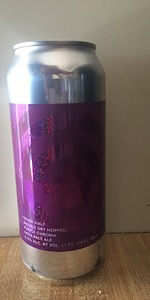 Notes: The DDH version of our Bloomfield brewed all Galaxy beer.
View: Beers | Place Reviews
Reviews: 3 | Ratings: 11 | Log in to view all ratings and sort

This was the second Chroma beer that I had from Other Half and like the first, there wasn't anything terribly fancy or complex about this. Once again, it featured one hop and let it shine with a solid backbone behind it. While Galaxy was featured prominently here, it wasn't as overpowering as it was in other beers that I've had that featured it.

This had a typical pour for an Other Half beer, as the muted, milky goldenrod hue was on par with their more popular offerings. Enough head topped this off as the lacing left behind was well-defined. The first ring was near the top of my pint glass as there were two below that with quite a bit of splotchy lacing remaining near the bottom of my pint glass. Loads of dank, dewy Galaxy in the nose with plenty of weed, white grape, and dankness accompanying that hop as the taste was slick and full of deep melon to go along with all of those notes. Some tangerine pith could be felt in the mouthfeel as this was quite sweet, deep, and turbid until the last tangy drop.

Not a lot of booze was in this and the malt was recessed as it allowed the soft, double dry-hopped nature of this beer to shine through. The malt was quite understated as the carbonation was weak as well, which allowed the flavors to emerge and play around before gently fading away. Some kaffir lime and lime leaf could be felt in the aftertaste as the citrus tang of it was able to tie everything in this beer together nicely. The date on the bottom of the can was smudged but this look and felt fresh as there wasn't any sediment in the liquid or left at the bottom when I finished it off. While not among Other Half's best, this was an enjoyable brew that was nicely crafted and up to the lofty standards that they've set over the years. If you like Galaxy unabated, then get your hands on this as their Chroma offerings showcase a particular hop quite nicely!

Yeah. Alright. Hello. Hey there... Like a rare rainy SoCal day, I’m into it. Yeah, I can totally see Raul curling up on the sofa with a glass of this with his baby mama on his side. What it is, is just more great OH - but it’s also a lil different - which Raul likes, ya know? Like, even though whole grilled onions on my Double Double is my usual order, sometimes you have to change it up and get diced grilled onions. And right here, OH definitely switched things up. There’s just this bright tangerine aspect that the Raul man has never experienced from one of their offerings. And after that is just more pithy, cloud-like beauty typical of OH.

So yeah, your boy is into it. Getty up!

Orange juice, peach, pith, white wine and a little weed in the nose.

It has a thick, almost pulpy feel, with a touch of fizz upon swallowing.


Double Dry Hopped Purple Chroma from Other Half Brewing Company - Brooklyn
Beer rating: 88 out of 100 with 11 ratings