Double Dry Hopped All Together
Other Half Brewing Company - Brooklyn 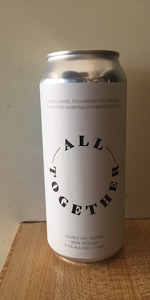 Notes: We brewed this recipe with 2-row, oats and carapils and then hopped it with a beautiful blend of our hand selected Citra, Mosaic, Simcoe and Cascade. This second batch gets the addition of an additional dry hop with the same hops for those of you that think there are never enough hops in beer.
View: Beers | Place Reviews
Reviews: 3 | Ratings: 16 | Log in to view all ratings and sort

Picked up 4pk of 1 pint cans at West Kill Brewery. (Excellent operation, btw.) Poured into a Speigelau wheat beer glass with a lot of head space to appreciate this one's aroma, which is very piney/resin-y and inviting. As a big NEIPA fan, All Together is a solid example of the style, not surprising coming from Other Half. An added bonus is getting full taste and body from a sub-7% offering. New to reviews (first one!), so I'll just say if this is your style, you won't be disappointed.

This was the first of 14 iterations of All Together that I managed to get my hands on, although it wasn't quite the first one that I bought or traded for. Since this was Other Half's idea, I figured they'd be the first that I'd crack open and review on here. No, the beer wasn't as groundbreaking as the idea behind it but regardless, I enjoyed this and how nicely crafted it was, as no particular aspect of it overpowered any of the others!

As expected, this had a pour that was on par with Other Half's typical offerings. Golden, uniform in it's haziness, and topped off with a sufficient head, the lacing left behind. The rings of lacing that lingered were layered, well-defined, and thick but they didn't quite go all the way down the side of my pint glass. Lots of oats, carapils, and wheat (yes, I know that that wasn't an ingredient in this) in the nose as the taste had a nice amount of Citra slickness with the other hops all present. A bit earthy, skunky, and dank all in one, the balance was really nice here with a good amount of broccoli, vegetable soup, and weed coming through once this fully warmed up. Full, balanced, and nicely carbonated, this was easy to enjoy without being too heavy or uneven.

The amount of alcohol was spot-on as it was complementary to everything else that I could discern. Any green and dank tropical fruit that lingered in the aftertaste was easily offset by the berry-like slickness, malt, and oats that gave me enough to chew on. While not among Other Half's best, this has me eager to go through the other 13 that I have here at the house, as this was such an easy beer to rally behind. Canned on 5/4 with "TOGETHA 4EVA" written above it, this was such a nice brew to get everyone all together with!

1st Review. Also distributed by BeachHaus, Belmar, NJ. Wonderful NE hazed IPA, here at 6% ABV.
"A Worldwide Collaboration to support hospitality professionals." Find it, buy it, enjoy it!
a) At cask temp, throws a massive meringue head that slashes mounds of lace and lasts over the hazed apricot body.
s) More melon than citrus, gooseberry, berries, salt grass.
t&f) Follows the aroma, fills the mouth with foamy pleasure.
o) A great cause supported by a stand out 6% IPA.

Double Dry Hopped All Together from Other Half Brewing Company - Brooklyn
Beer rating: 91 out of 100 with 16 ratings