Forever HBC 586
Other Half Brewing Company 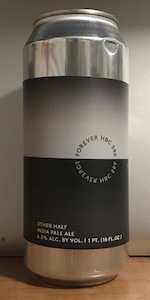 This is an interesting showcase of a yet unnamed hop. Sort of reminds me a bit of Mosaic. A little dank and earthy, with lots of tropical fruit notes like passion fruit and mango. Great stuff.

This was part of a massive haul that I had at Other Half a few weeks back, as I obviously never had this before. I enjoy their beers with experimental hops and although this wasn't as good as I had hoped, there was enough to like here as it had the classic Other Half look and feel to it, along with it's ease of enjoyment!

Not surprisingly, this had a golden hue to with some *very* find sediment floating in the liquid as that swirled and danced freely at the bottom once it worked it's way down. Not a bad head to this although the lacing was quite sparse with only a hint of a thin ring near the top of my pint glass. Lots of snake and jack fruit in the nose, along with some exotic floral and cactus underneath that with the taste being the same. Some mango, guava, and papaya stickiness emerged once this fully warmed up with the latter being on my lips after each sip. A hint of swamp water tied everything in together as the mouthfeel was full of rind and nicely slick, with hints of dough in the malt that gave this all the body it needed.

Not a lot of booze here although this felt warmer than it was in actuality as the booze was quite light relative to everything else that was going on. Dated 1/5 on the bottom of the can, this was fresh as could be as the flavors had a nice feel to them. There was a subtle burn left in the back of my throat once this went down but overall, this was a fine beer that was not quite up to Other Half's lofty standards, but fun to kick back with at the end of the day!

Forever HBC 586 from Other Half Brewing Company
Beer rating: 3.98 out of 5 with 3 ratings