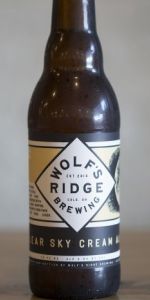 I got this off the single shelf at my local Giant Eagle. It poured a clear yellow with white head that is not leaving any lace . The scent had faint malt. The taste was nicely balanced and easy to drink. The mouthfeel was light and creamy with good carbonation. Overall it is a good beer.

Really nice cream, one of the truest to style I've ever had!

This beer pours golden in color and has thousands of tiny bubbles feeding three plus inches of white head that leaves a little lacing.

It has a grainy and floral aroma.

It definitely has a grainy flavor. There is a little floral taste in the middle and finish. The finish has a mild bitterness.

It is super easy to drink. I love Clear Sky Daybreak, so I had to try the base. It is decent for what it is. I think I will stick with the Daybreak though.

The corn is strong in the aroma, almost sulphur-like, but the flavor is crisp with lightly toasted grain and corn. Among craft cream ales this is probably the truest to tradition. Yes, it kinda tastes like corn but it avoids all the cheap beer off-flavors of Little Kings and Genesee Cream.

Soft and dry, flavors of biscuit, light butter and corn keep this light and easily drinkable.

Now what the hell is up with all the reviews talking about coffee? Come on people, learn how to review the correct beer: http://www.beeradvocate.com/beer/profile/33530/191752/

Bottle dated February 1, 2016. Pilsner glass. NOT DAYBREAK. For all those who reviewed the coffee-infused version of this beer, this is not it.

Appearance: Before judging the beer itself, I'm just going to note that I love the "lumpy shoulder" bottle and the elegant label and cap. With a fairly aggressive pour, yields one finger bright white head, and a full gold with rows upon rows of streaming carbonation. Some retention of a thin skim of foam, but the lacing is very, very good.

Smell: a fairly sweet, "beery" smell. Nothing off. A little hint of drying hay or straw. Doesn't smell like much; which is what the style is supposed to smell like. Certainly smells better than a blonde ale.

Taste: Pretty light, inoffensive arrival. Remains light, a little grassy across mid-palate. Not as much sweetness as I would have expected. Not really sweet at all. Then transitions to a fairly bitter/hoppy ending. Not in absolute terms, but for the style. There is something that is just a little too potent in the ending hop note. Like Prima or Pivo pilsners, when the hops start to go off on an excessively hopped light beer, you can really tell - perhaps this is approaching that.

Mouthfeel: Lighter side of midweight. Really, it's remarkably crisp and clean for an ale. Carbonation is strong, which is appropriate for the style, but is not carbonic or biting. I'd say this is the strongest part of this beer- it is utterly crisp and refreshing.

Overall: This is a good lager-like ale, though I have to say that when I am in the mood for a beer of this type, I am inclined to go for a German lager. Perhaps this is more true to our national brewing heritage, but it just doesn't do it for me. I have complained that outside of Great Lakes Brewing Co., it's impossible to get good lagers (or lager-like beers) in Ohio. This certainly proves that wrong. It is a well-crafted quasi-lager that hits the spot for quality local lawnmower beer. Would love to do a side by side with Madtree Lift, which I think I liked better. I have had Daybreak, and I can see why people love that so much as compared to this; I think the coffee would go really well with whatever that hop is that I am tasting.

Pours a light Amber color. Aroma is coffee with sweetness like cream. Flavor is coffee up with a balanced creaminess in the finish. Smooth silky mouth feel and overall really nice. I'm not the biggest fan of this style but this one was pretty good.

Flavor is coffee dominant, but the sweetness of the cream ale balanced brilliantly.

Smooth cream ale. The way cream ales are supposed to taste. Enjoyed at Digfest and was pleased to be able to have something besides an IPA. Very drinkable. Nice beer for summer. reminded me of Sun Kings cream ale which I also love. Little hazy. Full mouth feel. 250 characters is too much!!