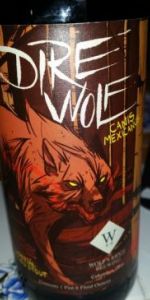 This beer pours blacker than a lump of bituminous coal. Barely any head is achieved.

The smell is chocolate, coffee, and cinnamon right off the bat. There are hints of pepper.

The taste begins with black coffee, dark chocolate, and cinnamon. The pepper creeps in towards the end. It finishes with lingering coffee.

This has held up way better than I thought it would. It kind of got lost in the cellar. It was a happy accident.

Awesome aroma with coffee and tons of cinnamon.

Strong cinnamon taste, but not overpowering. Just the right amount of heat on the back end.

Strong smell of cinnamon w a medium smell of coffee and some chocolate notes. No hint of pepper in the aroma. Cinnamon is balanced out by the coffee, chocolate and heat. Speaking of the heat...I think it's spot on...warms the back of the throat on the first sip. Great job!

A lot like Oro Negro from Jackie O's which is a huge compliment. Great beer.

Pours dark brown with almost no head. The smell is strong espresso and chocolate. The taste is very chili forward with strong coffee and chocolate. The pepper really comes through as both heat and flavor. A nice smooth, thick mouthfeel although highly carbonated. Very nice imperial stout, but a little too much pepper for me.

What is that wondrous aroma??? Cinnamon, chocolate, coffee, vanilla, pepper!

Taste follows with a nice wonderful mellow burn throughout. There is a simple roast coffee, spice and char backend that keeps the buds a tingling.

Medium body, a smooth aftertaste with that beautiful coffee, char feel at the end.

This is as close to Huna as I have had and surpasses the recent offerings from CCB (save the 2014 bottles which were sublime). Congrats to WR for an outstanding spiced stout to rival the big boys.

22 ounce bottle, no dating on it that I noticed but I believe this batch was released in the past month or so. Served in a snifter, the beer pours dark brown/black with about an inch and a half tan head that stayed around for a bit. There's a decent amount of lacing. I like the aroma a lot, the brew smells like roasted malt, bittersweet chocolate, cinnamon, coffee and some chili peppers. Taste is similar to the aroma but with the addition of some vanilla, and the chili pepper heat has a nice kick to it without being overpowering. It does have a good lingering spicy finish. All the flavors seemed to mesh well together. Mouthfeel/body is medium/full, it's creamy and coating with a moderate amount of carbonation. I thought this was a pretty good brew overall, I'd definitely buy this again! $11.99 a bomber.

A: black body with a small tan head that disappears almost as quick as you can pour it.

S: smells like a graham cracker, cinnamon, a light bit of peppers

T: nice bits of cinammon good sweetness great pepper taste and heat but this really reminds me of eating a graham cracker with heat

M: Nice body but not very thick a tad thin but wow does the pepper heat explode on the tongue and settles in, in the aftertaste

O: I really like this beer for the heat the peppers impart, it has a nice cinnamon taste and bready sweet body. I wish the mouthfeel was more viscous but overall I like the beer.

APPEARANCE (4.25) - Pours a somewhat thin black that drums up a solid finger to finger-and-half of a sort of mocha latte colored foam. Very foamy, tight, tiny bubbles form the head, which is always a plus, but the beauty fades very quickly. For a local brewery, I'm impressed they were able to integrate the coffee in such a way to produce an attractive head at all, and pleasantly surprised.

SMELL (4.75) - Superb. Cinnamon and dark malt on the front. Sweet vanilla coffee and cinnamon toast crunch with just a hint of heat on the backend. Surprisingly little chocolate on the nose. My only true complaint is that the scent doesn't linger long. After a minute or two, I either go nose blind to it, or the aroma volatiles have already passed.

TASTE (4.75) - I usually don't use this phrase, but this one really follows the nose, but with more chocolate and more heat. Cinnamon, sugar and vanilla right up front with a big surge of coffee and chocolate finished with just a touch of chili heat. Personally, I don't pick up any off vegetal flavors from this one which I have from other chili stouts and it seems others have noticed from this one. The coffee itself IS somewhat bland, and it could benefit from a bolder, more characterful sourced bean there, but I also wouldn't want it to overpower the other things going on, and right now it certainly doesn't. You can tell the coffee is there without it barking over the rest of the flavors which is good.

FEEL (4.5) - A solidly medium to medium heavy brew with near-perfect smoothness and very high creaminess from the oats. One the better utilizations of oats in stouts nationally, and easily the best local Columbus stout for sure. Nailed the feel here, it coats the whole mouth, leaving suggestions of cinnamon and chili heat but never feeling cloying despite the sweet, decadent flavors.

OVERALL (4.75) - I knew Dire Wolf was a very solid local imperial stout from an up-and-coming brewery that has definite technical skill, so I had high hopes for their mexican version. It blew my expectations out of the water. GREATLY prefer this to Bomb! and it's easily an excellent value for what you're getting. This isn't just a local brewery jacking up it's prices because it has to pay the bills, this is just good beer being priced to reflect the skill and quality you're getting. Don't sleep on Wolf's Ridge brewing, they just might be the best brewery in Columbus, well on their way to challenging Jackie O's from Athens.

Smells like spices, vanilla, and some coffee. A lot of cinnamon.

Some distinct coffee and vanilla up front. Very nice. Reminescent of Bomb! Also some chocolate and cinnamon. Then it gets very spicy. Lots of peppers here. Definitely some burn and tingling lips. It also has a bunch of green chili flavor. Aside from the heat, there is a lingering cinnamon and charred flavor.

Body is excellent. Full and chewy. Guessing oats even though that flavor didnt come through.

I have been back and forth from 3.75 to 4.25 with my taste score, so I split the difference. Ultimately I think it is just too much from the pepper standpoint. Not just in heat, but in flavor. I feel like I ate a handful of green peppers. I feel it just detracts from a lot of the other things that are going on, and it is very well balanced otherwise. If you are always chasing down the fiery hot sauces you will probably dig this. It is one of, if not the hottest beers I have had. Overall this falls pretty short of Xocoveza, Bomb!, and Oro Negro. Like what they are doing though and excited to try more varients of Dire Wolf.

Damn, this is the best spiced stout from Ohio. The heat is very present, but not so overpowering that I cant take it in. Better than Oro Negro imo. The cinnamon isnt too bad. The chocolate is tasty in here.

Don't know if this is the version I've had before or not. Artificial but different and good.

Up there with the best Chili beers. Poured a little thin looking, but the Oats help make for a creamy mouthfeel . A bit more heat than Hunahpu's, Bomb, Luchador.....etc. Maybe even a touch more heat than the recent bottles of Mexican Cake. Never heard of this brewery before this beer, took me off guard in a good way!

Pours a solid black color with a light brown head. There is a clear viscosity in the pour. The nose is loads of pepper heat, cinnamon, and roasted malts. The taste is sweet initially, followed by roasted malts, vanilla and then the peppers come through and nearly dominate the finish. The finish is a complex combination of everything and it lingers. This is an excellent spiced stout, and one of the best I've had. The heat is more intense than many others, but it definitely works in what they're doing.