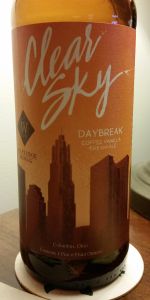 Clear Sky Cream Ale infused with vanilla bean and a rotating selection of light roast coffee from One Line Coffee.

Clear orangey gold with a huge white head. Coffee bean dominates the smell and taste, while also shaping the feel a good bit. Nose has some golden malts and vanilla, taste has sweetbread added too. Just so coffee forward though, want some more malt to balance. Feel has the coffee percolation but the malt and creamy yeast make themselves known much more than in smell and taste. Very bright, airy, and light. When in the mood for a light cream ale with a huge coffee note reach for this one

A: The beer is clear yellow in color and has a moderate amount of visible carbonation. It poured with a half finger high bright white head and has very good retention properties, consistently leaving a short head covering the surface and lots of lacing down the sides of the glass.
S: Light to moderate aromas of coffee beans are present in the nose along with notes of vanilla flavoring.
T: The taste follows the smell and has faint bits of underlying sweetness, but these are overshadowed by a light amount of bitterness imparted by the coffee beans.
M: It feels light- to medium-bodied on the palate and has a moderate amount of carbonation.
O: This beer does a good job at showcasing the coffee while still tasting like a cream ale.

A Tavour treat. Pours a golden color with a minimal head that disappears quickly. Aroma is coffee. Tastes of sweet vanilla and black coffee. Slightly bitter at the finish. Good grass cutting beer.

12 oz can, born on 5/19/20, poured into a pint glass at 42 degrees F:
L - straw colored body with a soft white head that quickly dissipated
S - coffee and vanilla
T - nice dry coffee flavor as well as some vanilla, very nice flavor
F - medium mouthfeel with notable carbonation throughout
O - very good beer for the style, this baby has won awards and it's easy to tell why

A coffee and vanilla aroma, with something a little off lurking in there.

On tasting, the offness showing its head on the nose turns out to be a rather unpleasant bitterness. Unclear what the source is, the coffee, the malt profile maybe? The coffee and vanilla is present, but very much in the background.

Overall, after the look, this one goes downhill. Couldn't get beyond the bitterness in a cream ale.

Big coffee aroma, pours a clear light gold with minimal dusting of white head. Flavor is strong with notes of coffee, and a hint of vanilla. Light bodied, and very easy drinking. A nice change of pace from the usual summer beers.

Had this beer at the tap room and it was incredible. If you love coffee beers this one is a must. The only thing I regret is not picking up a 6 pack of this stuff. Light colored beer. Strong hints of coffee, just as if you're sticking your nose is a coffee bean bag. Very smooth, easy to drink. Ill be a buyer in the future.

My first beer from back in the 70's was Gennie Cream Ale. I haven't had any kind of cream ale since then- until now.

This was a light gold color with a rapidly diminishing white head. I was expecting to smell vanilla, but the coffee was what came through first, with a vanilla afterthought. What made me happy was the way this was full of cream sensation over my tongue. There was a war between the sweet vanilla taste and the bitter coffee, that made it a complex and fascinating drinking experience. Will have to think about what food I would want to have with this, but will probably look for it again.

The coffee is a nice addition to this cream ale, giving it some distinctive qualities that go well with with the beer style profile.

I might not have purchased something called a "coffee vanilla cream ale" on my own, but my sister and her husband brought me a couple of these recently from Ohio. So there you go.

Pours a thin, slightly cloudy golden straw color with no head or lace. The nose is funky with distinct notes of vanilla and coffee present at the same time, which I guess is kinda the point. Slightly bready aroma to it as well. It's not a strong aroma, but its subtlety conveys a certain dignity. The taste follows suit here, with noticeable flavors of vanilla and coffee, followed by less noticeable earthen terroir flavor, and finishing up with a faintly recognizable sweetness that I can't quite put my finger on. Malty sweet, but also something beyond that. Funky. Mouthfeel is forgettable.

On the whole, this is a really interesting beer. I think it works, but it an odd way. I wouldn't rush out to buy lots of this if I lived in Ohio, but but I'm glad I got to try it just because it's so unique.

12oz bottle received from WesMantooth as part of NBS BIF #6. According to the label, it was bottled on August 14, 2017. I may have mistaken it for a style better suited toward aging.

Poured into a Wolf's Ridge glass from the same sort, a sort of stemless Teku-looking type, this was a hazy, honeyish color of amber, with a thin, noisy head that dropped quickly.

Better balance in the taste than in the nose, but the vanilla is a little too dominant. The light coffee is an undercurrent that becomes more dominant as the taste heads towards the finish. The middle of the taste features a corn-like malty sweetness that's too brash for my liking. Maybe if a darker roast of coffee was used that would tone down the corniness.

Body is somewhere between light and medium bodied, with a slightly oily mouthfeel.

Too much vanilla, but that's more on my palate than the beer, I suppose. For me, a little vanilla goes a long, long way when it's in beer. The coffee might balance it better if it was a stronger, darker roast, but then again, I'm a fiend for dark roast coffee. This is an interesting experiment that didn't quite win me over, but it's possible it might have if I'd drank it when I received it. Regardless, Wolf's Ridge is an adventurous brewery whose products, in my limited experience, are always worth checking out. Thanks, Corey!

Incredible beer. Immediate smell of coffee and clean malt. Vanilla flavor is light, but adds to the overall full-bodied feel of the beer. Look and mouthfeel of a classic cream ale, much like Wolf's Ridge's regular Clear Sky cream ale. Overall, just a wonderful beer for both session drinking and standalone.

I bought a 6pck of this from the beer store around the corner. It poured a clear golden with no head and no lace. The scent had hints of vanilla ice cream. The taste was nicely balanced and easy to drink. There is a cream ale base. The mouthfeel was lighter in body with subtle carbonation. Overall it's ok.

Clean, Caffeinated, Different, True
A fitting name for a very impressive Cream Ale base that has been infused with coffee and vanilla beans. I always get very excited when a brewery comes out with a coffee beer that is not a Porter or Stout. Clear Sky Daybreak, a Cream Ale with some vanilla in it, really works. And one of the best things about this brew is that it does not lose its Cream Ale quality or its beery character at all. Viva la cerveza extrema! [Jason]

A gift from @SomethingClever – thanks Dave!
12 oz bottle with smeared packaging date. Stored at 42 degrees. Served at 42 degrees in a hand washed and dried Jester King snifter.
Aroma – faint vanilla, no coffee, hint of graininess.
Head average (Maximum 2.2 cm, aggressive pour), white, mixed density, average retention, diminishing to an irregular two to five mm creamy ring and a thin partial layer.
Lacing – none.
Body – gold, clear.
Flavor – very light coffee and vanilla and some graininess. Flavors are subtle, but this is one of the few vanilla brews in which I can both smell and taste the vanilla. Tastes like a lager with some coffee and vanilla added. No alcohol, no diacetyl, possibly a hint of dimethylsulfide but very weak.
Palate – light, watery, soft carbonation.

Really not very much to say about this beer. No strong flavors or aromas. A passable lawn mower beer.

WOW what a surprising beer. Definitely tastes different than it looks. Wonderful aroma of coffee and vanilla. Everything you would expect from a cream and much more. My Wife loved it!
We did a review on our youtube channel click here to check it out > https://www.youtube.com/watch?v=Zruz-TMBUnQ

In a snifter the beer was a clear gold color with no head to speak of.
Aroma of coffee, vanilla, and sweet malt.
The taste followed the nose: coffee, vanilla, cream. There was a touch of late hop bitterness.
Very smooth and easy to drink.

Dark gold with a soft white head settling to to a thick collar.

Taste is light roast ground coffee, grass, bread, and a little sharp corn. At times, for some reason, I get a hint of blueberry lemon.

Frothy, soft, full bodied--a little bit of a surprise for the style.

Pours out a light golden yellow.

Aroma starts with a nice earthy, roasty coffee followed by vanilla, bit of sweet bread and grainy malt notes too. Coffee and vanilla dominated, but not overwhelming everything.

Flavor also starts off with fresh roasted coffee (a lighter roast), creamy vanilla right into sweet bread and a bit of the malt bill on the finish. Vanilla and coffee present and up front, but nuanced and balanced too.

Light bodied (per the style), hint of bitterness and a creamy mouthfeel while staying crisp.

Lots of flavor, low alcohol and a really solid beer!

A: light yellow gold with maybe a touch more gold and great clarity poured with a nice soapy head but it disappeared quickly

M: lighter to medium with a touch of cling good carbonation

O: This beer is exceptional the coffee and vanilla are right there in the nose and taste but what blows me away is the amazing malty grainy finish that just almost screams lager. I would go out of my way for this beer.

Smells of coffee and cream

Had a splendid coffee taste not too strong but not quite subtle, blended very well with the cream ale flavor

A light creamy texture not too thick of a consistency not very viscous either.

Overall great on all fronts, I love cream ales this one especially and I am proud of my local area for producing it, made with local coffee too for an added bonus to the local businesses. World class for sure and definitely outshined my expectations and its Ohio competition.

Daybreak from Wolf's Ridge Brewing
Beer rating: 90 out of 100 with 90 ratings