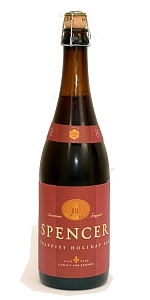 Notes: Mahogany in color, wholesome in body, lightly spiced, a heart-warming feast day ale from our table to yours.

So, I waited for this brewery for years. First and only Trappist brewery in U.S. and in my town, a few miles away. Then the first beer came out and it was OK, nothing too special, and overpriced at that. Finally they came out with a second beer, hopefully this one is better. Still holding out for the stout they promised, and please make a Westy style beer! Best night to review this one, Holiday Eve, so for that I'll be doing this in some sort of poem ala Twas The Night Before Christmas.

Twas the night before Holiday, and I poured a beer,
Trappist Holiday Ale so have no fear.
It poured a large fluffy head, billowing with foam,
Lacing was everywhere, I even think it reached Rome.
It had a hazy appearance, a dark ruby chestnut colors,
Sediment floating, like it's nice Belgian brothers.

Nose was abound with a big holiday spice scent,
A nutmeg allspice cinnamon thing, adding to the aromas it lent.
Sweet candied date and dark fruits abound,
Brandy raisin candied buried in some holiday candy I found.
Candy molasses caramel and sweet things all around,
Bring that nice holiday dessert candied fruits by the pound.
Faint booze and esters finish it off nicely,
with the baking spices I expected but thankfully not thricely.

I dig in for the taste expecting something good,
And I'm rewarded with a beer that tastes like it should.
Nice Belgian flavors, ester profile rings out,
A touch of booze and phenols but not much about.
Tons of dark fruits and baking spices dominate,
With nice flavors being quite predominate.
Candied dates, fig paste, and raisins soaked in brandy,
Get a little frisky with the sweet molasses and caramel candy.
Allspice nutmeg cinnamon frankincense and myrrh,
The first three are there but the other two are not, derrrr.
Belgian candi sugar rounds off the taste,
As well as some sweetened candied fig paste.
Fair sweetness throughout lends to a sweet sticky finish,
But thankfully the mild booze does not really punish.
Sticky on the end, with lingering candied dried fruit,
Mild baking spices, sweet malts and loot.

Mouth is nice and heavy, not really too thick,
Not syrupy but sticky and mild booze with each warming lick.
NIce carbonation, frothy throughout,
A nice mouth feel without a doubt.

Overall pretty nice, a nice warming Holiday treat,
For the Holiday day and beer that I'm enjoying in my seat.
Quite and enjoyable beer to sit sip and share,
I can drink a bunch, enough to let me hibernate like a bear.

Lovely bubblegum Trappist character with rich dried fruit and caramel. I don't know if I love this beer, but I really really like it. It might not quite live up to the European Trappist beers, but it's darn close. Considering these guys have a few years of experience instead of a few centuries, this is a wonderful effort. Serious kudos to the brothers of Spencer. These guys should be commended not just for their personal sacrifices, but for their artisanal chops as well.

Poured into Spencer glass. The beer shows a cloudy, mahogany reddish brown color with a half inch of khaki colored head that fades to a ring and a large raft in the middle that persists and clings nicely to the glass. It would be a beautiful beer if it was more clear.

The smell is Christmas against the BSDA backdrop. There are ample spices that are reminiscent of the holiday season - nutmeg, cinnamon, coriander, ginger, and clove emerges upon warming. Dark fruits - raisins and dates, figs. Caramel and brown sugary sweetness, the Belgian candi sugar. There are other fruits as well - apple, a bit of cherry.

The taste follows with the spices coming more to the front as the beer warms. The clove is a pleasant hit that emerges upon warming. It is fairly sweet but not overpoweringly so.

The feel seems a bit light. Yet there is a lip-coating sweetness and a lingering aftereffect that is quite dry.

Overall, this is a very nice beer for the holidays. It certainly checks all the boxes for a BSDA and delivers on the holiday aspect promised. Very good - worth a try and I think it is a beer that would be well-received by everyone because while nicely flavored, it is not an overpowering rendition of a holiday ale.

5 oz pour on tap. Hits all the right notes for a Belgian strong dark ale: raisin, fig, molasses, dark malts, candi sugar, some warming alcohol, and (appropriate for a holiday ale) some spices. Mouthfeel could have been a bit more full.

A tasty offering, but a tad too sweet. Dial back the sweetness a bit and it would be a winner, although I kept picking up a bubblegum taste which is something I really don't care for much.

Well here it is, at long last! A Belgian-style Strong Dark Ale from Spencer. And a very good one at that!

It pours a ruby-hued tannish mahogany with a nice firm beige head on top and loads of sticky lace clinging to the glass. Smells of sweet malt, brown bread, dark rum are closely followed by spicy hops, copper and that distinctive Belgian yeasty smell. A faint whiff of pine is noticed but it quickly fades.

This is a malt forward brew with tastes of rye, brownbread, honey, and creme brulee. Hopheads may start sucking on pennies or licking grapefruit rinds in search of something with more biting bitterness, but if they relax and take their time with it, the hops will reveal themselves with pleasant offsetting bittering flavors of orange peel, pine, spices and tobacco.

The 9% ABV is well-disguised, but as you exhale, you'll probably notice a rummy perfume in your breath.

Cheers to Brothers Damian and Isaac for brewing this wonderfully warming Holiday Ale!

Bottle: Poured a clear copper color ale with a large off-white foamy head with good retention and some lacing. Aroma of spicy sweet Christmas cookies with caramelized malt notes. Taste is a nice mix of spices with some Christmas cookies and some caramelized malt with some candied sugar. Body is about average with good level of carbonation with some not real apparent alcohol notes. Enjoyable but maybe a tad too sweet.

Light brown color with a strong cloudiness. Decent head which lasts in the form of foam on the surface. Good streaks on the glass.

Pleasant alcohol and spice in the form of clove and licorice. There's a bit of medicine to the nose as well.

The medicinal aspect is a bit stronger on the tongue. The Christmas aspect comes from the spicing--I identify mostly clove and light nutmeg. The alcohol remains the strongest flavor. Very high carbonation with a below average body. The aftertaste is spicy with a light darker malt balance.

75 cl. cokerd bottle. Pours a ruby colour, with an off white head, ok retention, layer and ring. ARoma of acid red fruits, cinnamon, bubblegum,, clove, nutmeg Medium body, carbonation is ok. Palate is creamy and silky. Taste is similar to the aroma. Kind of a christmas beer with a more vinous character. Extraordinary.

Spencer Trappist Holiday Ale filled my tulip glass with a mahogany colored body. A tan 2-finger bubbly head was produced. The head held very well as consumed. Aromas of dark fruit; plum, raisin, figs are noted upfront with a sweet and spicy background. The taste matches the aroma with spices of cinnamon, nutmeg, clove and the sweetness of caramel and brown sugars are much more pronounced.

The body and carbonation are high-medium with a smooth and somewhat creamy mouth feel. Alcohol is well hidden with a mild warming at the finish.

HOLIDAY Ale is a flavorful, well balanced Belgian Strong Dark Ale that is easy drinking...I'll have another!

Drank from my Spencer chalice

A - Pours a dark cola colour with an off white head that retains and laces
S - Aromas of fruit, Orange, biscuit very pronounced
T - Nice roasted malts and spicy citrus flavours, not so much dark berries as you would expect from a Belgian beer of this type. This is a winter warmer type beer.
M - Medium to full body with medium carbonation
O - This one tastes like a winter warmer and is worth seeking out. But don't expect a classic Trappist beer

A: The beer is very hazy light brown in color. It poured with a thin off white head that died down a bit, leaving a large patch of bubbles on the surface and a thin collar around the edge of the glass.
S: Moderate aromas of spices are present in the nose along with some hints of malts and earthiness.
T: The taste has lots of flavors of Belgian yeast along with strong notes of spices—clove and nutmeg seem to stand out in particular.
M: It feels medium-bodied on the palate and has a moderate amount of carbonation.
O: This beer lacks the dark fruits normally associated with beers of this style but is an interesting selection for the holidays with all of its spices.

Strong aroma of spice and dark fruit, pours a murky amber with a thin white head. Slightly sweet and sticky, with toffee and caramel notes. Full bodied, and definitely a sipper. Another solid beer from the newest Trappis brewery.

Poured from a 750 ml. bottle into a goblet.
A - Copper colored, a gentle thread of carbonation, wispy cap and no lacing.
S - Belgian brown sugar, raisin, date and lightly roasted malts, notes of ginger and clove.
T - Caramel, ginger, toffee, and light brown sugar, sweet malts and a hint of mint leaves with green tea.
F - Medium in body, palate coating is sweet, the linger fades to bitter. Really nice display.
O - What a nice treat for a first run by the Spencer. Certainly worth seeking out.

Just a beautiful looking mahogany pout with red hues and a lingering, foamy off-white head. It does dissolve after a moment or two.

The aroma surprised me. Yes, I do pick up the usual Belgian yeast, Belgian toasted biscuit, and Belgian candied sugar but I really find it to be more fruity, cranberry-like. No booze.

Medium to better than medium body.

The taste evolves some. At first I pick up the same fruitiness but as the beer warms and I get through the bottle I find a little more biscuit character and peppery spices. The finish still tends to be fruity. Very nice all around. I hope you get to try it before this limited edition is gone.

Purchased in Ohio for $13.99/4 pk.
Poured with a nice rocky head. Clear, ruddy color. Nose didn't seem to have much noticeable spice but definite Trappist-quality yeastiness. Medium to full taste with good malt backbone and decent amount of spice but not cloying or overpowering. Bitterness in finish that is a nice complement to EtOH and spices. Well-made beer.