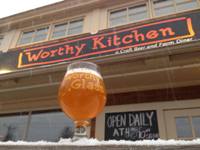 View: Place Reviews
Reviews: 9 | Ratings: 33 | Log in to view all ratings and sort

I really can't say enough about this place, great vibe, fantastic tap list and killer food, what's not to love? I really don't know of a better place in the area and easily one of the best in VT. Highly recommend a stop if your in the area and not a bad drive off of 91/89. Stop by Hops N' Barley right next door to stock up on quality craft brews.

They also have prosecco & Cab Sav on tap for the ladies

Awesome place and a must stop for food and craft beer while in VT. On tap was Hill and Lawson's amongst many great others brews. I got HF Susan while the kids got strawberry lemonade and the wife got a cocktail. Service was top notch and the food was amazing and didn't have to wait very long for it. A+ in my book!

Great place, the vibe is easy going, rustic. Built into an old family restaurant, but now has a "barn" feel inside with old lumber, etc.

Order at the counter, no table service, which is fine in my book. They do help you to your table if needed, bus tables, and carry extra trays of food to your table if your hands are full. Have a nice deck out front with some comfortable outside seating.

Food menu is on a large black board, changes often, all fresh and local ingredients when they are available. The burgers are out of this world, have tried beef and pork options. Fries are fresh, crispy, and great. Poutine is fantastic, local cheese, duck fat gravy and crisp bacon smothered over fries.

Always have great beer selection. Usually a few from Hill Farmstead and Lawson's Finest, as well as other local greats. Had Second Fiddle on my last visit. They select other great brews from MA, ME, and across the country. A few cider options, wine, mixed drinks, mead are also available.

Like this location better than Worthy Burger which is also a great place. The variety of menu items at this location can make anyone happy.

HF, Lawson's, Fiddlehead with ridiculously good food that is locally sourced? Yes Please! On the evening I went (a Monday) it was relatively quiet, tap list consisted of HF Edward and Susan, Fiddlehead 2nd Fiddle, Lawson's Super Session, 2 Maine Beer Co offerings, and a bunch of more that I don't remember. The food here is also a star, I had a brisket sandwich that was awesome, while others I were with had burgers that were just as good. If you are around this area, the perfect place for a couple of beers and awesome food.

Decent food at fair prices and a very good selection of Vermont's finish micro brews.
I had Lawson's Finest Spirits Sip O Sunshine on draft and it was excellent. Located right on Route 4 in Woodstock Vermont, and right near Woodstock Hops & Barley a great micro brew beer store.

When I think of Woodstock, VT, the first thing that’s come to mind for a long long time is ‘Plans change’; an old inside joke amongst us from a VT trip a dozen + years ago. Just a blurb spoken by my buddy’s horrible, thankfully very ex, girlfriend, whose Cher name I shan’t mention lest she appear Beetlejuice style. Man, did I dislike her (and that thing on her face). The day’s plan held about 10 of us stuffed into Big Johnny Ray Ray’s Escalade out to Quechee and then Long Trail on the way back west for din, but when we got just outside of Woodstock, she announced that she wanted to dinner here, my deal derailed. I got about as far as “Okay, but the plan is…” when she turned and bellowed “Plans change!” I was grumbly; it’s true. In the awkward silence that followed, Johnny Ray Ray just drove right through the village and out the other side without a word on anyone’s part. Maybe people noticied, nobody wanted to speak up. When queried some miles further down the road, he said, “What? All I saw were, like, sports bars, didn’t look like anywhere cool to go”. I, riding shotgun, gave him that look, beer plans don’t change…

It’s been a long day, and we aren’t done yet. And we still need to talk about heading over into New Hampshire tonight. It’ll happen, but we’re going to talk about it. Just shy of the sports bars that make up Woodstock proper, finds the standalone somethings shared structure on the side of the road.

Enter and push to the bar (what else?), a concrete slab ‘L’ with a wood base and piping foot rail; seating for 8 on stationary stools a-swivel (Hey, it’s Jona! Blind Tiger Vu). Barback wall is subway tiling with a 20 tap row on the wall facing me and 8 more around the bend for wine (3 red, 3 white, 1 sparkling), & a single (citizen) cider. Glassware racked below, a whole lot of them Worthy’s. 18 taps listed on very familiarly formatted boards on the corner; beer, style, state, ABV, price, & serving size when something unpintlike. Wines and Worthy drinks on the far wall, and the food menu running 4 boards alongside us; tacos, burritos, wings, Worthy-wich, local farm specials, platters, sides, & desserts.

A row of panel windows up front to a porch holding a buncha tables over Rte 4, all Sierra umbrella’d up. White honey combed tiled floorings, and a white painted ceiling with paper snowflakes dancing throughout the room. Track spots over the seating and on the boards, drop filament pan lamps over the bar and adjacent seating, & strung snow flake lights flickering. A single shared hightop off the bar, 8 shortys up front, and bar counter space everywhere there reasonably could be. And a small side room with a ½ dozen tables, gaming gaming.

Food, I am eyeballin’ the tacos (done any of 3 different ways; green chili chicken, achiote roast pork, & short rib). So, I guess it’ll be short rib, no, wait, green chili chicken, no, wait, okay, definitely the short rib, maybe, unless, um, can I get one of each? No? Bummer; that totally would have been the way to play. Hmmm, total change up, sweet & sour salmon, brown rice, sesame broccoli. The salmon had that great crunchy thing going on, I enjoyed the brown rice of good, and the broccoli was 800% better than stupid cauliflower ever could be (like that which Witzel took in on his pickle plate). He also ‘et the meatloaf and I let him sit next to me. I was seriously not digging meatloaf being so close to my space.

Revisited 4 months later for din & drinks. We split maple bacon wings for a starter; they, of crispy goodness. Now Dave was pushing that ramen dish pretty hard (house cured pork belly with duck confit). It looked really good (Andy had it) and was eggless as I’d prefer, but I knew there’d be ramen in Portland tomorrow or tomorrow’s tomorrow, so I went with the stout braised beef short ribs instead (herb potato cake, carrot gremelatta, & braising jus). Excellent; it just melllted. Oh, so you waited ‘til now to ask me if I’ve had their fried chicken before as “it’s the thing they do?” (Next time out, I suppose, if I don’t panic and go for green chili chicken tacos). And the aforementioned drink; Zero Gravity Sim City, Zero Gravity Conehead, & Lost Nation Pils.

Shootin’ the shit with old friends and some Grateful Dead for Phil’s displeasure. Great beer, great food, great people, well worthy the hike off the highway.

I could easily give The Worthy Kitchen the same review I gave The Worthy Burger. The atmosphere is a little different and the food menu is completely different but equally tasty and the staff is equally friendly and helpful. The beers are great and the Rookies rootbeer is second to none. Give it a try. You wont be sorry.

My only complaint about The Worthy Kitchen is that it takes me most of an hour to get there.

The Worthy Kitchen is my goto location when I want great beer in Central Vermont. 18 taps of high quality craft beer dominated by outstanding Vermont and New England brews (like Lawson's Finest Liquids, Zero Gravity, Maine Beer) but with a great mix of the like of Founder's, Stone, Greenflash and Sixpoint as well. Always happy to offer a taste of what you are considering...if you don't ask for it, they may bring it anyway just based on your questions...

The food focuses on local, fresh ingredients. I'm not a meat eater but they have plenty of local meats...and ample selections for the vegetarians as well. Great, creative, yet somehow simple foods at the same time.

The staff is really nice, helpful people. Folks that you'd wanna sit down and enjoy a beer with. The worst thing about it for me is that it is 30 minutes away...but in Vermont everything is 30 minutes away. Actually...it is right outside of Downtown Woodstock.

Worthy Kitchen in Woodstock, VT
Place rating: 4.69 out of 5 with 33 ratings