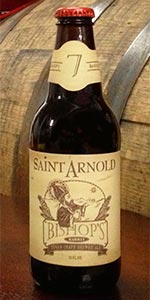 The first Bishop's barrel that I'm a little disappointed in. I love Imperial Stouts and anything aged in bourbon barrels. Got it on tap at Whole Foods 7oz poured into a brandy sniffer glass.
L: Gorgeous dark black with a nice 1 inch head.
S: wonderful coffee and chocolate, but I'm not getting any of the bourbon
T: Coffee and bitterness hit you right away with a lot of carbonation. I don't get any bourbon. It's not smooth and silky like expect out of a good Imperial Stout. The bitterness and carbonation overpower this beer.
F: As mentioned above carbonation and bitterness.
O: Very disappointing Imperial Stout. Not sure if this has anything to do with tap vs bottle or that it's been 3 years since this beer has been made (according to their web page). If so it hasn't aged well. Very sad about this beer.

Picked this up in a trade with Cisco. Dark brown, nearly black pour with a pretty quickly fading one finger tan head with nice lacing. The nose is dominated by the bourbon along with hints of oak, vanilla, molasses, caramel, and some subtle roast. The taste follows suit with great bourbon character along with hints of tobacco, vanilla, oak, toffee, molasses, and subtle cocoa. The mouthfeel leans toward the thin side for the style, but it doesn't hurt this beer at all. Subtly sweet, hugely drinkable, and nicely balanced. Overall, another great beer from the Bishop's Barrel series. Saint Arnold has definitely mastered imparting the bourbon barrel character on their beers without over-doing it. Highly recommended if you can still find one!

Very deep brown around the edges with a black interior. Thin head that fades to med-thin collar, light wisping, poor lacing and poor legs. Aroma is of brown sugar, molasses, pretty heavy on the bourbon, with faint vanilla and woodiness. Taste is also strong bourbon, molasses; behind that I get some wood. Medium body and carb which is too low/high respectively for a stout in my opinion.

A: Dark brown, bubblier than your typical Imp Stout but not like fingers or even a quarter finger of foam, but I poured more gently once I realized the bubbles were bubbling. Lacing lasts long on the glass, as does the minimal head. It is easily apparent that this is not as viscous as many BA Imp Stouts.

S: Really nice bourbon barrel aroma with a resiny sap kinda thing going on. Maybe once can convince ones self they can smell molasses?

M: Thinner than I usually like, but damn it just makes it that much more crushable. Almost a good thing? I could drink a lot of these.

O: Not the whaleyest of BBA Imp Stouts but damn I'd drink a bunch of these if I had access to a reasonably priced case. This is a fine beer!

Solid barrel-aged brew all around with just a bit more vodka/alcohol heat than I prefer ... hard to hold that against, however, for it had all of the good bourbon (vanilla, oak) notes you want with some good darker malt.

After a year-plus hiatus from Saint Arnold, this one gives me big hope for the rest of their Bishop's series.

I had the pleasure of trying this at The Ginger Man craft pub in Dallas, TX. Remember it having your standard stout tastes such as coffee, chocolate and malt, but the dark fruits, like black grape, currants, raisins, prunes and plums standing out A LOT with the alcohol, almost to wine levels. Amazing, wish I could try this again.

Really strong bourbon barrel on the nose with spirit and wood.
Taste is a little better for me with a more pronounced chocolate character. Still heavy on the barrel and not in the best of ways.

Good but much better BBA Imperial Stouts out there.

Served in a teku glass.

Appearance is extremely dark brown, but not quite black, with a khaki head that thins out from the initial pour but still sticks around.

Aroma has notes of vanilla and oak. A nice bit of the bourbon character comes through as well. Not very roasty, but definitely some fudgy, chocolate notes. It's a bit sweet smelling as well, which may be from the molasses added. Alcohol seems to be pretty well hidden for 11%. Overall a solid smelling bourbon barrel stout.

Taste follows the nose perfectly. The alcohol is way more pronounced in the taste than the aroma. It's fairly boozy. Lots of bourbon character, especially on the aftertaste. Middle of the mouth has some nice sweetness to it. Dark chocolate comes to mind. Not very much roast to this one, which I don't mind. Alcohol becomes more pronounced as it warms.

Mouthfeel is thinner than you would expect with a bourbon barrel stout, with a bit too much carbonation for my personal preferences.

Overall a solid bourbon barrel stout. Definitely worth the price and worth trying. Would drink again for sure.

For those not familiar, these brews are special batches aged in complimentary barrels. This 7th edition is a Russian Imperial Stout aged in Bourbon Barrels. It pours dark brown with a large, tan head. Smells strongly of bourbon & malt. The flavor is also heavy on the bourbon & roasted malt but also adds in cocoa & vanilla. Very thick & creamy. If you don't like bourbon, this might be a lil too strong for you but I found it very enjoyable.

Smell: Mild aroma with some sweet dark fruit (plums, dates) as it warms and traces of alcohol.

Taste: Sweet but not overly so with vanilla and bourbon notes. Dark chocolate, coffee bitterness and increasing alcoholic burn as it warms

Overall: Without some of the depth and complexity of comparable barrel stouts, but still a nice, restrained balance of roasted malt (coffee, chocolate) and bourbon.

a: pours a a very deep brown, I wouldn't say quite black, as I could see through the beer as I poured. leaves a good head, especially considering the alcohol strength. good head retention.

t: much like the nose, the bourbon overpowers. This beer has a wonderful bourbon flavor, but the stout characteristic do not come through. only slightly do I taste chocolate, roasted malt, coffee.

M: mouthfeel was much too thin. I'd say more along the lines of a dry stout than a barrel aged imperial stout.

O: the bourbon flavor is delicious, but overpowers. This beer is restaurant/bar only and sells for ~$10. so if you figure the 300% alochol mark up most bars/restaurants have, this beer wouldnt be a terrible buy at liquor store prices. I dont think I'll seek this out again. I wouldnt turn down a free one...but I wouldnt seek it out for ~10.

A: Pours near opaque black, with a bit of ruby/brown around the edges. A creamy, silky looking tan head rises to two fingers. That recedes after a minute with some lace.
S: Wood, dark chocolate, and molasses in the nose, and is the entire show. Simple, but very nice.
T: I love the Woodford Reserve barrel flavor here. Probably the whiskey that produces the most distinct barrel character I have had (probably the only one I can individually pick out). Slightly bitter dark chocolate, molasses, baked bread, roasted malt, creamed coffee.
M/D: Maybe a bit thin, and a little prickly carbonation. Though not as watery as many people here seem to claim. After the initial sweetness from the molasses, this finishes dry. A huge beer, but I don't get any alcohol burn. A great sipper.

I think this is another quality Bishops Barrel offering, and maybe my favorite of the RIS they have done. It drinks way to easy for an 11+ ABV. I have had several bottles, and really enjoyable.

Beer pours a reddish dark brown color. Not even close to black, very minimal amount of tan head and lacing, as to be expected from anything barrel aged. Nice ruby red tinges around the edges, looks nice, but doesn't look like an imperial stout to me.

On the nose you can pick on the spices right off the bat followed by the bourbon barrels. Not too much coffee/chocolate going on, just spice and bourbon.

Flavor wise the spices dominate the flavor, its like the pumpkinator/bb6 without the pumpkin. Its pretty sweet, not like a sweet/milk stout, but just enough for you to label it sweet. Its got a little bit of a boozy hint to it and the bourbon flavor finishes it off.

Mouthfeel wise its extremely thin and watery, reminds me more of a dry stout than an imperial stout.

Overall, I was pretty disappointed with this offering, it passes for a bourbon barrel stout with a little bit of spiciness and sweetness to it but its nowhere near as good as last years BB6. Everything about this beer was just mild and toned down, nothing really special about this other than the exclusive limited release nature of it.


Bishop's Barrel 7 from Saint Arnold Brewing Company
Beer rating: 93 out of 100 with 147 ratings