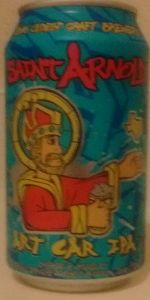 Notes: Art Car IPA is an American IPA featuring a blend of both new and old hop varieties from the Pacific Northwest.

The nose is a blend of apricot and tropical fruit and mango. The taste starts with a big bitter blood orange that morphs into mangos and sweet tropical fruits. There is a lightly sweet malt body that allows the hops to shine while maintaining a nice complexity to the flavors.

Malted Barley:
Made with 2-Row Pale, Cara 45 and Carafoam malts.

Hops:
The hops used during the boil - Columbus, Cascade and Simcoe - are reminiscent of the West Coast style and provide pine notes. A generous dry hopping of Amarillo, Simcoe and Mosaic brings out the tropical mango and citrus aromatics.

Yeast:
The use of a special yeast provides a more fruit forward aroma and flavor than the standard Chico yeast commonly used in IPAs.

"A very hoppy American IPA." "an American IPA featuring a blend of both new and old hop varieties from the Pacific Northwest." Original Gravity: 1.063 (15.5° Plato). Bitterness: 55 IBU. Alcohol Content (ABV): 7.1%. "Made with 2-Row Pale, Cara 45 and Carafoam malts." Brewed with Columbus, Cascade and Simcoe and dry-hopped with Amarillo, Simcoe and Mosaic.

White colour head. Head lacks the thickness, frothiness, and cream that would make the appearance pop, tending a bit towards a thinner weaker look instead. Head retention is nice - ~8 minutes.

Appears well-carbonated. True to style but not unique or special.

Pale malt sweetness seems to balance out any hop bitterness. Suggests a sticky well-balanced beer with a nice hop profile and a pleasant approachable taste. It's nice to see an IPA on the market that doesn't target either aggressive bitterness or Odwalla-like pulpiness.

Aromatic intensity is above average. Fresh and inviting...what the kids might call "dank" or "green."

TASTE & TEXTURE: I do get a hint of Mosaic-like blueberry even though Mosaic was only used for dry hopping and I didn't detect it in the aroma. Simcoe isn't as dominant as I suspected, to its benefit. A pale malt/2-row backbone suppresses any overt hop bitterness, keeping it balanced even if its hop pungency is lacking. Cascade and Columbus-induced floral hop flavour rises to the surface, but that character isn't as vivid or deep as would be ideal.

Smooth, wet, slightly sticky, medium-bodied, somewhat refreshing, a teensy bit oily, and well-carbonated with a slightly crisp bite. More oiliness and "dank" (as the kids say) stickiness would play into the Amarillo resin better, but this has a competent mouthfeel overall.

Overall, it's pretty well built even though it fails to showcase its hops as well as would be ideal. I like it and it's enjoyable fare.

Flavour duration and intensity are average.

OVERALL: Lone Pint doesn't have anything to fear from Saint Arnold yet, but the latter has certainly surged in quality over the last 4-5 years as evidenced by this more than competent IPA. A sixer of this ran me $7.67 plus tax at a Sam's Club in Austin, and I'd happily pay that again to get this over competing expressions of the style from the likes of Hops & Grain or the like. In terms of the Texas market, Pinthouse Pizza and Lone Pint have this beat, and it can't compete with great expressions of the oversaturated style from out-of-state, but I look forward to seeing Saint Arnold continue to hone their craft based on the strength of this brew.

Serving type: 12 oz can into a pint glass

Pours an orange honey color with eggshell white bubbles that persist. Smells of fruity hops, pine dankness, slight floral hops, and heavy mango pineapple scents. Taste reflects the smell. Initial fruity hops and tropical fruit flavors mellow out into a biscuit like malt flavor that finishes with a lingering piney dank taste. Feel is slightly oily feeling with some fluffiness. An odd mish mash of feel but not off putting. Overall, this is a good beer that has great qualities all around that make it tasty and easy to drink. Thanks to my sister for bringing me a case of this from the great state of Texas, I will drink it with gusto!

Went to the Saint Arnold Brewery again this past weekend, and had the privilege of trying the Art Car IPA on tap, along with their new Icon Gold. I was already a fan of Saint Arnold's Elissa IPA, but this one definitely won me over. Very, very easy to drink, nice grapefruit and citrus aromas/taste. Can't wait to have them sell it in bottles. I will upload a picture of the pint glass I purchased, since I believe this will be on the label.

Pours clear, orange in color with 1/4 inch head. Taste is pineapple, mango, orange, and light pine. Wow this beer is juicy. Slightly bitter with medium light body. Super juicy--If I had this in a blind taste test, I would swear it was a Tree House product as they make the only other ipas that I have found to be this juicy. Best beer from the brewery by far. Really well done.

12 oz. can poured in Imperial Pint
Look:
- Rich golden
- Translucent
- Big fluffy head, full 3 fingers - breaks down quickly with small to medium bubbles
Smell:
- Medium aroma
- Floral, like the petunias out front
Taste:
- Roasty
- Piney hops, but not overpowering
- Sweetness stays on the tongue, like brown sugar
Feel:
- light to mild
- tiny bit too much carbonation for my preference
Overall:
- pleasant drinker...enjoy the sweetness
- carbonation turns me off
- could be a repeat offender

From a can and poured into an AB pint glass (not THAT A-B, it's an Arrogant Bastard glass!). Orangish hued and with a loose white head that soon collapses into 1/2 of froth. Nice aroma of grapefruit and maybe lemon, no hint of pine to speak of. First taste reveals a well-balanced malt-hop syzygy (damn, I don't get to use that word enough). Not that perfect balance is a requisite for my IPAs...some of my favorites are way too hops-forward to even be loosely construed as "balanced". But this beer has malt that doesn't obscure the hops, instead "enabling" them. Without the substantial malt backbone, this much hops would make a one-dimensional chore-to-drink IPA (yes, I'm looking at you Pale Dale). It's my favorite offering from St. Arnolds and that includes Endeavour and the Divine Reserves I've had. It blows away Elissa, in my opinion. I remember the first Elissa I had...I thought IPAs couldn't get much better. Now Elissa tastes good but very ordinary and simple. This can't ever be my favorite IPA because the bright, citrusy hops profile doesn't satisfy my craving for that dank, resin-y piney flavor that I have come to love but it's a very solid, well-made beer.

L: gold-amber, relatively dark but crystal clear; pushes up thick head of offwhite foam about 1-inch tall that is sticky; laces a bit; a thin column of bubbles flies up the glass and creates about half a skin with a nice collar of foam

S: grapefruit, orange ... glazed donut sweetness; as it warms, the malty sweetness hits you first then the hops ... the hops lead off when it's ice cold; end result is candied orange

F: filled out by carbonation enough to give it a medium body though it's still light and almost watery ... very light for so much malt taste and 7%-plus ABV

O: great IPA, very easy to drink and at just over a month old still has a ton of popping hop flavor; a beer I'd consider returning to and one I'd love to try inside two weeks old; as well as this seems to be holding up, probably a great option when you can't find a super fresh IPA