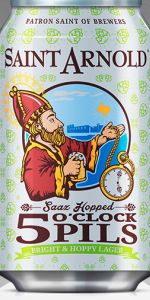 Notes: We believe the greatest beers are the ones that achieve their goal with the simplest recipes. 5 O'Clock Pils is all about its two ingredients: pils malt and Saaz hops. This is the entire basis of the original Bohemian Pils style.

The pils malt is light yet with a pleasant bready character, emphasized by the decoction mash wherein a portion of the mash is removed, boiled and added back. Saaz hops, the only hop that has never been hybridized dating back to when it was first cultivated from a wild plant around 1,000 years ago, gives a pleasant earthy spiciness.

The final, unfiltered beer has a light maltiness, a big refreshing bitter and wonderful, delicate hop flavor and aroma. This is the beer we enjoy every year in the Czech Republic when doing our Saaz hop selection. Only, we've added even more hops. It is a beer that can be enjoyed everyday of the year. You will never tire of it.

So highly rated - this is the beer that ended me on pilsners. I thought that maybe I just never had a good one, but even for style this one didn't improve my opinion.

Served from a 12oz can into a shaker pint glass. Reviewed on phone.

Texans (like most "Americans") seem to know & love the typical MASS-produced "pilsner-style lager" (e.g., Budweiser, Miller, Coors, etc.), but here in Houston is produced a Czech-style pilsener (e.g., Pilsener Urquell) - only I believe BETTER! The hops are the proof of this beer!

Lightly cloudy pale gold with a foamy half finger head.

With the slightest hint of raspberry in the aroma, this is otherwise your typical bitter, grassy and bready American attempt at a Pils.

St. Arnold does this one just right.
Color is a hazy gold with a nice bright foam with decent bubbles arising from lower to midway upwards.
The hops are noted, but not overpowering. Just perfecly balanced. Bready, earthly complex flavors topped with a slight malt all blend together just right to deleiver a smooth flavor and a pleasant, smooth mouthfeel. The ethanol componet is not overly present thus leading to a great drinkability with a great pilsner flavor.
What a great beer.

Look is dead on, light golden, pure white head, moderate carbonation. Despite the Saax hops I find this beer tastes more like a German pilsner. In fact, it tastes nearly identical to Bitburger from Germany. It is very good, much better than their "summer pils" which I find disgusting. If you want a great pilsner, this is it.

Not a Pilsner Urqhell (one of my favorite all-time pilsners) but a great beer. I do wish you couldn't quite taste the alcohol like you can on this beer. My point being that it tastes like an 8% beer when it's really a 5.2% beer. Not my favorite but it's definitely a good beer. I like it very cold, though.

This is hands down a perfect pils. I just don't understand why so few breweries can make a pilsner that you actually want to drink!

Thanks Saint Arnold for getting it!!!

I fell in love with Pilsners in Kenya years ago. This one is outstanding. Full mouth and feel. I love the art work as well on the can. This could easily become my go to Pils

The can describes this as a "bright and hoppy lager," and that is extraordinarily accurate for this excellent example of the Czech Pilsner. The pour shows a golden straw-colored beer that's a bit hazy and has a fluffy white head.

The aromas are dominated, of course, by the Saaz hops and the bready, spicy, earthy notes that varietal imparts.

The taste has big, luscious bready notes, some lemongrass, and a spicy kick to keep this dancing all the way along the palate. Magnificent.

The feel carries the body of the Pilsner malt, which allows the hops to lead while the malt stays in the pocket and gives them s the gravitas this beer needs.

Poured from 12-ounce can into a pilsner flute. Stunning appearance, crystal-clear pale golden in color with an abundance of sticky, brilliant white spongy foam. Aroma is almost "Belgian" in character, with light bready malt, a bit of yeast, a little hay, and hints of banana and clove. That Belgian character carries over to the palate. Nice, lingering bitterness from the Saaz hops, with a finish that is crisp and dry. Outstanding take on the Czech Pilsener.

Wow. First thought that came to me when I got to the middle of my can of this great pilz. Hits all the right buttons of classic look and aroma with it's slightly hazy straw/pale golden color and the carbonation rising up with that crisp almost peppery hit on the nose. Taste is smooth with a subtle ending bite, which I would prefer be just a smidge more, but gets a hint of sweet as you leave it on the tongue. Goes down clean and what you might call a juicy peppery finish instead of a traditional dryness. But that smidge more pepper/bite on the taste and little more dryness are the only two critiques I would give this. Really awesome pilsner and a definite pick up if you get the chance.

Serving type: 12 oz can into a shaker pint. Thanks to my sister for sending me Saint Arnold stuff to California all the time!

Pours a pale straw yellow, moderate turbidity, a lot of lively carbonation bubbles up from the bottom of the glass. Smell is of bright lemon, fresh grass, almost citrusy hops, a subtle chili pepper like aroma, with a doughy smell. Taste reflects the smell. Bright lemon hop flavors lead into a small hoppy bite that finishes with a clean doughy biscuity flavor. Hop bitterness is moderate and lingers for just enough to merit more drinking. Feel is light, lively, and extremely refreshing. Overall, this is a great pilsner that I wish I could get out here. It blows many local options out of the water.

Poured from 12 oz. can to the same Pokal glass as last review, although rinsed. Hazy straw color. Can see fingers through glass
Smells of green grass? herbs? farmy?
Taste follows nose with malty smoothness, earthy, greeny, hoppy. Just right bitterness. My first real taste of Saaz hops alone. I like it!
Mouthfeel is right for me. Smooth, slight thickness? Better than mass market pils.
One of my favorite pilsners! Since it hit the hometown market I haven't been without! I love this beer and it is local. (177 miles).

Smell: Grassy with with plenty of earthy and floral hop notes with some cracker

Taste: Similar to the aroma with a pronounced noble hop bitterness

Overall: This is beer nirvana. I love a good Pilsner but this is aggressively hoppy with all the right noble hop notes. Its refreshing to have an American made pilsner using only German hops in an American fashion. This doesn't feature overly citrus notes of American hops. This is prototypical Pilsner taken to the next level.

Pours clear golden with a nice white header.
Decent carbonation visible.
Smells like breads Pilsner malts and a hint of spice.
Taste is of a very crisp, bitter Pilsner, with hops and just enough tasty malts to balance it out. The hops do take to the forefront, and there's a slight mineral aspect. It ends fairly dry.
Feels is medium-light with medium-well carbonation.
Overall a solid hoppy pilsner variety that if anything could benefit from more malts and less spicy hop bitterness, for my taste anyway.

L: just a hair darker than yellow but not gold with lots of activicty in glass; mostly clear; thick 1-inch head of white foam that's sticky but not much lacing on the way down

T: peach, bread malt, earthy back bite of hops; the sweeter malt flavors remind me of an English pale ale, very fruity; dirt-hop aftertaste helps balance, though the malt again has taken over

O: very solid beer, among the best I've tried from a roster of disappointments rolled out by Saint Arnold; the malt takeover works great and is still well within the lines of a good pilsener; this beer is much, much better than Saint Arnold's seasonal summer pils

(It's) 5 O'Clock (somewhere) pours pale yellow with a touch of haze from being unfiltered, while its foamy white head releases a fresh, lemony, and grassy aroma with some soft breadiness. Crisp on the palate with a smooth, near medium body. Bitter and herbal with a zesty citrus edge and a clean, crackery malt flavor. Finishes with a deep herbal linger. A simply delicious nod to Bohemian-style Pilsner.

Pours clear gold with about 2 fingers off white head. Great head retention through the experience. Nice, bright Saaz hops aroma along with some notes of breadiness. Great mouth feel with nice amount of carbonation and super Saazy hoppy finish makes this one finish nicely.

One of the greatest CANtributors to The CANQuest (tm) is the Mighty JenRay! She hooks me up like nobody's business & knows my CANfinity, so it makes it easy for her to go shopping. It is easy on my end, also, as she only wants APAs/AIPAs/DIPAs or anything with "Hops" in its name. I really dig this one b/c it puts me in mind of the base of PapPap Coffee (my late maternal grandfather), who swore by "a pound of Eight O'clock ground" at the A&P on E King & S Ann Sts. It also reminds me of the lovely Clash Insky, who on a Friday afternoon two weeks ago, remarked "OMFG! This afternoon is going so slowly that we'll NEVER get out of here!" This, after I had thought, not moments before, "Man, this afternoon is cooking along. We'll be outta here in no time!" She sucked all of the air right out of me and I began to cry. When she inquired, I told her that she was like Siri to my Cookie Monster & that I didn't need her to check the timer. The next day, I was at Punk Rock Flea Market & got a Cookie Monster Doll! A couple of days later, at the annual library book sale, I got two cookie cookbooks & brought them in, also. Clash Insky is CANstantly being asked, "Is it Friday yet?" "How 'bout now?" How 'bout now?" She loves me.

Man, I Crack!ed that bad boy open like I was out in the desert & this was the first potable liquid in weeks! My inverted Glug created three-plus (!) fingers of dense, fluffy, foamy, puffy, bone-white head that hung in until the scaffolding fell out from underneath it. Color was a pretty Straw-Yellow (SRM = > 2, < 4) with NE-quality clarity. Nose smelled like my kitty went wee on my freshly-mown grass! Cattiness & grassiness, oh my! Mouthfeel was soft, caressing my poor, bruised tongue with its gentleness. Oh, my. It was like one of my exes, a nurse. She was gentle & caring, also, but she got tired of fixing me up, calling it "an inherent self-destructiveness" before she left. The taste was lemony, grassy, slightly biscuity and as satisfying as they come. Finish was cool & dry & left me reaching for another. If you are headed to the beach this summer, stock your cooler with CANs of this one & thank me later. Thanks, again, JenRay!

5 O'Clock Pils from Saint Arnold Brewing Company
Beer rating: 89 out of 100 with 123 ratings