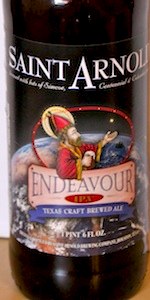 Endeavour is a double IPA. The color is deep amber with a light, creamy head. The nose starts off with a touch of citrus but then turns decidedly into peaches. The taste starts off with creamy malt resulting from the pale 2 row and caramel malts and Saint Arnold yeast. The hop bitter starts low then builds to a crescendo, but always maintains a balance even in its big finish. The hop flavor continues to be peaches, an interesting manifestation of the Columbus, Simcoe and Centennial hops.

This beer is best enjoyed at 45° or even a little warmer. Though the recipe and style indicate this beer to be enjoyed fresh, we expect this beer to develop interestingly over the years.

finally bought this one, (was a bit p;ricey for my blood)

poured from the 22 oz bomber into my new belgium goblet:

A: nice show on the pour, solid tighly bound 2 finger head and really p;retty lacing:
orangeish brew with a bit of cloudiness:

S: oh yeah the HOPS&gt; its been awhile since I treated myself to a IPA oh man it's good pineyness

M oily in a good way

D: a bit much to guzzle but do it anyway! hahaha

The more of these I drink, the more I like them. Super enjoyable/ drinkable brew at 8.9%. You barely notice the ABV. The hop/ malt balance is excellent, each distinguishable, but in perfect harmony, not opposition.

Not that Saint Arnie is known for being IPA innovators, but as a Texan, I can say this is probably their best IPA offering to date. So good, and a bang-for-buck winner at $6 a bomber.

Pouring to a tan hue with the slightest haze, St. Arnold Endeavor has a fragrant bouquet that combines zesty citrus and other fruits along with some biscuits. The head of foam on this beer is exceptional, and its appearance is certain to pique your interest and encourage that first sip.

Tasting this beer, you quickly realize that the appearance, however impressive, was only a warm-up to the delight that awaits. Yes, this beer is big on hops, but it is better balanced than other double/imperial IPA, with tastes of bread, pine, toffee, and caramel backing up the wonderful flavors from the hop trio that includes Simcoe, Centennial, and Columbus varieties. Taste sensations include a touch of grapefruit, orange, peach, and pineapple, with no one flavor dominating.

St. Arnold Endeavor is an exceptional beer in every way and I like it more and more every time I take a sip. It is one of a select group of beers that actually tastes just as good if not better as it warms. I would avoid serving it ice cold because doing so negates the complex flavors within. It is best served around 45 degrees but if allowed to warm slightly, it still tastes very good and some of the complex flavors become even more noticeable.

This beer is sold only in 22 oz. bomber bottles but anyone who has the chance should go out of their way to sample this amazing beer. It is better balanced than other imperial IPA and it isn’t surprising that Endeavor has already won an award at the 2012 world beer cup. I expect more awards in the future and more incredible, memorable moments made even better with St. Arnold Endeavor, the best beer in the St. Arnold lineup.

I'm a local Houstonian, and I'm a fan of St. Arnold's brews. First time I tried out their Endevour.

A - amber, almost honey color. Minimal head, but could've been as it was poured into a very standard pint glass.

T - peach notes that transform to tropical fruits. I taste some passion fruit, a little pineapple. Hops come in towards the end and linger. The hops are not too headstrong. The linger for a while in your palate.

M - body is in the middle. Lovely "oily" like mouthfeel. Not velvety, not light. Smack down the middle.

O - very pleased here. Loved it from the first sip. Wish the hops were just a tad more pronounced. Allow the beer to slightly warm up. I'm definitely going to buy some at Specs to have at home.

Poured from a 650 ml bottle into a tulip.

A: Light brown, with a ruby hue. Pours about a half finger, foamy, white head. Settles quickly, but leaves a ring of foam around the rim of the glass. Slight lacing.

T: Earthy and pungently hoppy. Has a slight fresh flora character, with some buttery sweetness.

M: Pungent on the front end, bittersweet on the finish. High alcohol character is apparent.

Atmosphere is pretty good. Nice hue, solid head, and some slight lacing. Nose is strong combination of bread and earth with a sweet balance. Flavor is earthy and pungently hoppy with a balance of sweetness and fresh flora. Overall, this is a really good quaff.

The Endeavour is the Divine Reserve #11's new alias and permanent addition to Saint Arnold Brewing company. It is a nice deep amber color with a light, creamy head. The smell has notes of citrus, which then fades into a nice peach smell. The taste has a creamy and carmel maltiness to it and is well balanced with the bitterness of the hops. The feel is great in the mouth, not too carbonated and has a smooth feel. We are so excited they will now permanently have this beer in their line., one of our favorite IPAs.