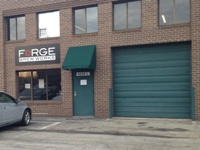 We at Forge want to thank you all for a wonderful 7 years. We have officially closed the Lorton location of Forge Brew Works, but we aren't closing up the brewery. Our new location is in Warrenton, changed our name, and we had ourselves a barn raising.

My favorite microbrewery for 50 miles, but not everyone's cup of tea (or glass of beer). The interior is pre-modern industrial, but kept clean and functional. But we're there for the beer, and again, it's for some and not others. The brewer specializes in what I'd call Belgian/Abby/Farmhouse styles, and at that they are VERY good. But if you're looking for the next great IPA, well, there may be a good one on tap, but certainly not two or three of them, and maybe not even one. Their 'hoppy' beers tend to be kind of Belgian'y too, and if you like that, you'll love it. They also specialize in stronger beers, but even the strong ones (up to 11%) don't taste the least bit like alcohol. Really nice, but will land you on your butt. They do an imperial version of a 'German' style beer that is quite remarkable, but I usually end up with the sweeter, Abby styles anyway because they are awesome - easily the best in this area. Bar staff is friendly, happy to give tastes, knoweledgeable, and ready to discuss beer, or life, or whatever. I rated the selection low because they don't cater to everybody (e.g., IPA lovers). But the selection is awesome if you like the Belgian styles, and I have never had a beer of any style that was less than good - something I can't say for most places this small.

I really want to like Forge a lot, but the focus on Belgian styles can be limiting. They do have a good DIPA and Farmhouse Ale that are both approachable, and of the Abbey Ale stands out, too. The space and location are very limiting, and trying to get out of there during rush hour is a 30-40 minute exercise in frustration that keeps them out of many happy hour discussions. It's a solid choice for a post-lunch stop on weekends, though!

Located in an old warehouse cinder block building. They haven't done much, and with a name like Forge Works I was expecting a little more. Beer selection was decent, 12 taps and a cask (empty at this time). Quality of beer was mehhh. Hope they grow into it.

I have been by Forge numerous times. Their place is in an industrial area, so It's a little rough around the edges. They usually have around 10 beers on tap, available for on-site consumption, as well as growler fills. They seem to have a variety of styles. I haven't had a beer there, that I did not like.

Look, it's a new brewery in an industrial park; it ain't much to look at yet. But they've got excellent beer (try the Galaxy IPA or any of their stouts), and the guys are real nice and welcoming. We generally bring our own sandwiches or other food, and kick back for a couple of cold ones.