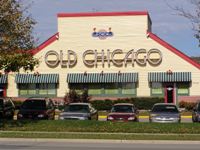 View: Place Reviews
Reviews: 9 | Ratings: 16 | Log in to view all ratings and sort
Reviews by olacub:

What a disappointment. First off, the food was way below avaerage. The pizza was crap, and the calzones were pricey and awful. They seriously tasted like they were bought in the freezer case at the grocery store and warmed up. Atmosphere is forced schlock. The beer selection was pretty good, but not as impressive as I had expected. I counted 18 taps, of which only half were things of interest (to me). My two pints tasted off as well (Goose and Gray's). There are so many better places to drink good beer around Madison.

My wife and I stopped by when we were in Madison. We had originally planned to go to Uno’s Bar and Grill but I of course noticed the “110 brews” on the Old Chicago’s sign and we made an immediate U-turn. We were seated immediately on a Sunday afternoon with the bar to the right, dinning area to the left, and even the patio was open on a warm March day. Overall their beer selection is way better than average, but you won’t see any rare releases by any means. Plenty of good Wisconsin and Imported beers to try. Food was fantastic and service was good with a good waiter that knew the current brews being served. We’ll be sure to return the next time we are in the area.

Highly visible along Mineral Point Road and eminently accessible via the # 67 bus, I was home. Well, by way of explanation, I had recently changed this place to my home location since I get to Madison at least annually, as opposed to Lincoln, NE, where I initially signed up. I am (unapologetically) one of the BA/OC lovers mentioned by previous reviewers. I want one in Lancaster, PA, preferably in the Park City mall.

Meanwhile, in MadCity, the entry was on the right-facing side and opened into a short vestibule followed by the m.d.s. to the immediate left. The restaurant area was just past the mds, slightly left in the front half of the building. I am a barfly, so I turned right, headed aft and stationed myself at the dark-blonde wood "U"-shaped bar in the midst of the twenty-nine (29) CO2 taps and one (1) N2 tap (Guinness) attached to the back bar. Flanking each side of the bank of taps was a two-door, five-shelf cooler filled with bottled beers. The bar was surrounded by high tables and chairs in the center and booths along the window. All of the way aft, left, were the lavs. A small game room was right, past the bar and also featured the massive "Hall of Foam", a designation to which I endeavor. A door slightly to the left of the H. of F. led to the outdoor patio seating.

Bottom line: Nothing new or startling, except maybe the patio. Trivia Night is Wednesday starting at 1900. I am not going to to defend my stance, nor am I going to try and persuade you. Visit if you want, and if not, so be it.

I tend to like Old Chicago establishments I've been to. I like the Around the World Beer Tour and completed two during my senior year of college in Lawrence, Kansas.

I've been to a number of Old Chicagos around. This one isn't much different than most. It's a chain, so the food is the same as anywhere. The beer selection is supposed to be customized to the area where the restaurant's located. So why are there so few Wisconsin beers at this one? Not sure.

The place is big, with plenty of seating and plenty of TV's. I like the atmosphere just fine. The service was just so-so. Our waitress was really young, not talkative at all (and bordered on unfriendly) and didn't know squat about beer (I don't know if she was even old enough to drink).

So I haven't been back since. Not that I wouldn't go. But there are so many other places in Madison that are so much better.

A: It's ok, nothing special. Tends to be a big happy hour joing.

Q: The food tends to be pretty good, I like the wings, and you can't go wrong with pizza, but nothing that really wows me.

S: It varies. A lot. The bartenders are usually pretty good. There have been a couple of time that the wait staff has forgotten about my entire table for long periods of time.

S: I don't even know how many times I've gone in here and their "local specialty tap" has been Miller/Leinenkugel/PBR. Given all the great breweries in the area, you'd think they could do better than that. Sure they have 110+ beers available, but any time I go in there I can only find maybe 5 that interest me.

F: Again, it's ok. Stick with the pizza, it's a better value.

V: It's an OK value, probably a little pricey for what you really get (average beer, hit or miss service, average food).

A- was fine but like any other chain
Q- food was decent nothign special but it wasnt bad,
S- the server was energetic and helpful, just not too knowledgable
S- had some decent beers but i was disappointed that alot of their 110 beer list were crappy beers, but i was still able tofind good beers and choose them, althoguh ill prolly never make a full tour, because i dont think ill ever buy a pabst blue ribbon or miller or bud light at a bar that is offering victory hop devil or dogfish head 90 minute for a dollar moor

also the 4-7 happy hour is nice, $2.50 good beers on tap after the dollar off happy hour special, and the $1.99 mini appetizers

Old Chicago is probably Madison's best drinking location on the west side of town, which isn't saying all that much. The atmosphere is typical sports bar/restaurant. I believe Old Chicago is a chain, but don't know for sure. The selection is fairly large: approximately 20 taps and over 100 bottles. They make an effort to get beer from the largest number of countries possible. The problem is that they often have the crappiest beer available from each country. Furthermore, the tap list doesn't change significantly over time. All of that being said, you can get some very good beer at Old Chicago: Tyrananena IPA, Great Lakes Porter, Capital Seasonals.

Service is fine, no complaints here. Food is average, standard pub stuff with an emphasis on pizza. This place is very close to where I live, but I hardly ever come here. I prefer a place with a smaller selection, if it's more carefully chosen (e.g. Quivey's Grove).

A pizza chain with a fairly good beer selection.
Atmosphere is mostly forced Chicago-style artifacts. Decent yet antiseptic. Beer is not proclaimed, until you see the menu.
100+ beers to chose from (this has gone down notably in the last several years, now probably 50-60). Knock out 10-20% as uninteresting (macros, etc.) and your still in good shape. Most are served bottle-form, and this leads to the occasional old sample. Nonetheless, they have a solid tap selection, and bottle problems are an exception.
Service is akin to that of any large restaraunt. Some of the staff are knowledgeable, some are not. Some are friendly, some aren't. Overall, the job gets done, and questions get answered, if not right away. I have had good success dealing with any problems I've encountered.
The pizza is quite good, even if produced en masse. The calzones are worthwhile as well. Food make this a decent stop....as does the beer selection. Due to this combo, it's not a bad stop on Madison's west side. I enjoy it probably more than I'd like to, but usually because there is a ringer or two on tap.

Old Chicago in Madison offers about 110 beers. A lot of swill, a lot of okay imports, and some nice regional selections. Most beers go for around $3.50 with Chimay Red topping the list at something like $11.50 (if you really want Chimay with pizza). I didn't get an iced mug, but the beer is served pretty cold. The food is typical chain-restaurant quality - good, not great.

Service took a big hit because they almost kicked me out. I was with my parents and didn't have my ID with me. It is legal under Wisconsin law to order and drink at any age if parents are present and I've never been carded before under similar circumstances. I had my parents order for me figuring that would satisfy restaurant policy. Nope. The manager comes by and tells me I cannot drink at all if I don't have my ID. I finished my one beer while looking over my shoulder and feeling like I was 16 again.

As long as you don't forget your ID you should be fine, but I'd rather be at a local place than a national chain.