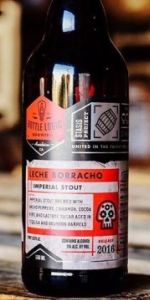 Got this one from vanlingleipa recently. Cheers, man!

From a 500ml bottle into a snifter
Vintage: 2016
Stout with ancho peppers, cinnamon, cocoa nibs and lactose sugar aged in tequila and bourbon barrels.
Aged for 12 months in barrels

APPEARANCE: This thing gushed out like mad upon opening, then stopped all of a sudden. Lots about a third of it. Very unfortunate. Pours out very clear dark brown and yields a two finger, bubbly, crackly, light tan head with good retention. Clear black body with no carbonation. Head slowly fades to splotchy wisp and ring. Splotchy wisp remains but leaves no real lacing down the glass.

SMELL: Cinnamon is more dominant up front, with ancho peppers, some sweet lactose sugars, notes of tequila and bourbon with some oak hints as well. Sweet cream and vanilla at the back. Okay, but the cinnamon kind of leads the way and it's not quite as decadent as hoped.

TASTE: Cinnamon and ancho peppers up front, with tequila, oak and vanilla cream towards the swallow. Medium finish of ancho heat, sweet cream and milk sugar, some spicy tequila and oak notes, as well as a good amount of cinnamon. The tequila outplays the bourbon and the cinnamon is definitely the most present of the adjuncts. This is alright but not overly balanced or flavorful.

PALATE: Medium-fuller body with slightly lower levels of carbonation. Creamy enough, goes down fine and finishes lightly sticky. Some decent chili heat lingers, but nothing out of this world. The gusher bug probably affected the mouthfeel the most, as it's slightly flatter than their other barrel aged stout bottles. I kind of prefer this kind of feel.

OVERALL: Unfortunate that it’s a gusher, but I don't think it overly affected the flavor, as it’s still decent once it calms down. Some nice flavor and character here, but it lacked a little bit of balance and the flavor just wasn't as forthcoming as I'd hoped. Perhaps the tequila and bourbon barrels could have played a bigger role and the cinnamon dialed back a bit. Regardless, this is a good beer but not up to the lofty standards set by a few other players in the sub-genre. Thanks again vanlingleipa!

Appearance is solid black with almost no head. What dissipates quickly is espresso-brown and effervescent. Smell is huge cinnamon and graham crackers with some chocolate and maybe marshmallow. I couldn't detect any hints of tequila, and very little bourbon, though I did notice some vanilla. The smell is, quick frankly, incredible. The taste is all cinnamon sugar graham toast up front and quickly transitions through chocolate and hints of vanilla and some oak before centering on the pleasing, mole-like spice of the ancho peppers. Feel is super smooth, a tad thin, which seems to be a hallmark of several BA BL beers. Overall, it's just a really fabulous beer and somewhat unique in the realm of "Mexican-Hot-Chocolate" beers in that it maintains a significant spicy flavor without being overbearing.

Thanks to thesinisterkid & infared90s who each tossed me a 500ML bottle of this my way. I do dig the industrial, steampunk design of these labels.

Pour is black, with light coating of bubbles around the rim & in the center that looks a lot like a 45 RPM record insert (look it up). Smells like vanilla creamer with a touch of chiles added. Wonder if my wife would buy that for her morning coffee.

Leche Borracho means “drunk milk” per Google translate, which I find pretty funny. For a beer with so many nouns on the label, this is a bit tame. Unbalanced towards the chiles & cinnamon, which throw a hazy veil over the other ingredients. Milky chocolate comes mid-palate, along with a great, thick malty base. The barrels are disappointingly muted, borderline absent. I’m wishing I shared this bottle right now.

Disguise this in a New Belgium bottle & neckbeards everywhere would be shrugging. Sorry my fellow beer-lovers, but I can only attribute the sky-high scores on this beer to zombie-like group think. Good beer, but nothing special about it.

A big fan of BL, and chili stouts but this missed the mark. Great smell with some nice chili heat spice but taste spice is really hidden and out of place, mouthfeel is thin slick

A - Pours a deep dark brown, opaque with a thin layer of dark tan head
S - mole sweetness, chocolate, cinnamon, some chilies, a little barrel, can't detect the tequila. The nose had me really excited
T - All of the above come into play here but they just don't seem to come together. Creamy chocolate, sweet, some cinnamon and spice. Boozy finish.
M - What the taste lacks the mouthfeel makes up. This is rich and creamy, one of the best bodied stouts in this style.
O - If the flavors had come together better this would've been at the top of its class, as it stands it was well done but didn't quite hit the levels of beers like Huna, Mexicake, Abraxas, etc. Still enjoyed it and glad I have another, we'll see how this develops!

Pours a dark black body, oily with a one finger mocha head. Fair bit of leg on this one as well. Good retention, bits of lacing. Smells of cinnamon, vegetal pepper, milk chocolate, with a distinct agave component layered with the bourbon. It also smells quite spicy, whoa. Not as spicy on the nose as it is with the bourbon GNVP opened at the same tasting, but it is one of the spicier beers out there. Flavour is a nice combination of cinnamon and pepper; with the pepper winning out here. Milk chocolate, cocoa, agave, oak, bit of smoke. A lot going on here, although the spiciness does bother me a fair bit and prevents me from being able to dig more into the flavors. Mouthfeel is full bodied, thick and creamy, substantial with the vanilla seemingly contributing more to the marshmallowy mouthfeel than the flavour. Good carbonation. Great body, great adjuncts, especially if you like your beers on the extreme end of spicy.

This will be a classic grain of salt-type review, as the bottle was clearly compromised in some way.

Upon opening, this one nearly immediately exploded, it just poured out of the bottle- we lost half the bottle nearly instantly. Once in the glass, it was the expected dark black, with no head or lacing.

Smells like creamy dark chocolate, tequila, cinnamon, and peppers- this at least is nice.

However, the taste feels off. As it warms, I start to get more of the aspects I'd expect from the beer, but it's overall just muted, and strangely watery. There's a significant lack of carbonation, and all of the flavors seem quite muddled. This is very disappointing, because I was quite looking forward to this. The pepper character and cinnamon character play nicely off of each other as it warms more, and there's a good amount of tequila, with very little bourbon.

This is super creamy, with a flat mouthfeel.

I can't believe this is how it was intended. I will re-rate if I get a chance to try it again.

This beer is awesome.

A great beer don't get me wrong... but the flavors did not combine for me. I had on tap during week of logic and perhaps was just a tad too fresh out of the barrels. This will probably become better and better in time.

Gushed a little, opened over the sink. Pours as black as the night, with a beige, fluffy, medium sized head, collapsing to a thick ring of lacing.

Smells of a sugar glazed licorice sweetness among wooden, spicy cinnamon. Got a nice mix of bakers chocolate and licorice going on, with a complex barrel character tying the flavors pleasantly together. Scented wood, flowery lemon zest and melted, spicy chocolate complete the complex nose, which comes beautifully together.

Has a very low carbonation, complimenting to the complex appearance of the beer. Finishes pleasantly warm with a supportive pepper spice quality, hinting to the beers bigger body, while maintaining its smooth, silk, mouthfeel.

Tastes of bakers chocolate, toffee and fudge, with an early cinnamon impact. Its creaminess finds a counterpart in well pronounced, warming peppers which add a nice bite to the flavors. This is certainly on the sweeter side, due to the lactose sugar and well pronounced, chocolate defined malt profile. Both barrels act very well together, appending a boozy, oaken note to the malts, without becoming taste defining dominant, but adding dried oak and peppery lemon zest to the already established foundation of the beer. Finishes thinner, with a maintaining peppery sugar sweetness among milk chocolate and glazed caramel.

Extremely well made stout, complex and bold, reaching its high anticipated goal of creating drinkable mexican chocolate. The Tequila barrel is a perfect addition many other breweries did not reach out for in comparable beers, adding a flowery hint of lemon and black pepper, blending flawlessly into the cinnamon and pepper spice quality. Hot and sweet with enough body and complexity to convince on all fronts.

This is probably the best beer that had any part of it aged in tequila barrels and also one of the best mexican style stouts on the market. Great mix of barrel and spice. Love this beer.

Tasted from 2018 bottle. Pours black with faint light brown head. Aroma of peppers and cinnamon. Flavor is moderately sweet. Nice pepper flavor with chocolate and cinnamon. Just a faint hint of tequila that I wouldn’t have picked up without knowing. Some caramel and bourbon notes. Complex and extremely well done.