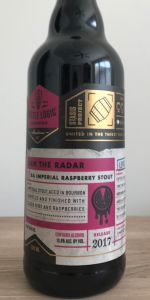 On tap at Bottle Logic in Anaheim, CA.

Bam. Like Miranda Kerr with just the right amount of blush on, this is a sweet one. Man, it doesn’t taste big at all like The Rock on steroids. It’s a so called “big” beer, but it’s just damn smooth like Errol Flynn when he isn’t being a pervert.

Raspberry is in the background, comes in tart tinges. Chocolate's most prominent, sorta dark but no bitterness. Nowhere near cough syrup. Not candied either. Don't know that I'd know raspberry if it was blind taste.

Dense but fruit cuts through that a bit.

This beer deserves every bit of acclaim that it has reserved. I wish it were thicker but it otherwise really comes together.

As the name indicates, it's jammy. Also cocoa and bourbon. It tastes like it is described. Fantastic.

The raspberry is obvious just from the pour because the head is tinted red.

It is there early and often in both the aroma and taste. It borders on, but stops just short of overbearing. Having an actual raspberry taste to it, meaning there is a touch of sourness, makes it work. It really is like chocolate covered raspberries. It smells better than it tastes, but is solid overall.

Beer is dark black with a tan and hint of pink shade head. Raspberry flavor is the star of the show but still silky smooth and very drinkable for the ABV. Clean finish with a touch of warmth.

2018 vintage. Poured from a bomber into a taster glass.

Chocolate-raspberry-bourbon on the nose, the raspberry is more pronounced as it warms up. On the tongue it's a good balance of chocolate, raspberry, sweet caramel, maybe a bit of vanilla, cocoa. Medium-heavy mouthfeel with low carbonation.

Look: Thick black. Viscous. Tan head
Smell: Raspberries, chocolate and bourbon dominate
Taste: Like a raspberry chocolate bar. The bourbon is present but doesn't dominate
Feel: Great feel, super thick
Overall: Great beer. One of my favorites. This hides the ABV beautifully. It allows the raspberries to shine, but bourbon and chocolate are both present.

A: Pours a thick black with a cap of dark brown head. Recedes quickly to a sharp ring. A few streaks of lacing.

S: Juicy raspberry and dark powdery cocoa, light bourbon and dry oak, and a hint of roast and vanilla.

Had on tap at BL tap room. Not a fruit stout guy... so trying to judge on merits not my preferences. Jammy red colors standout against dark brown/ black color. No real head and minimal retention. Nose is base stout and chocolate with the raspberry wafting up in a swirl. No real notes of BA. Taste is chocolate and raspberry forward... actually buried the bourbon. Feel is smooth; medium with some light carbonation that seems to suit the fruit. Overall it all seems to mostly work except the bourbon which seems to be at odds with chocolate and fresh raspberry. Likely works very well for others that like this kind of stout. I admire it but would not seek out again.

On tap at local place. Been wanting to try this for a while, glad I’m able to today.
L: pours oil-like black in appearance. No head, but a nice chestnut-colored ring of microscopic bubbles perimeters the glass. Alcohol legs are evident. No lacing.
S: when the glass was served me, the raspberry was evident. As it warms, I get less Black Berry, but more molasses and chocolate. Very sweet smelling with just a touch of bourbon oak presence.
T: really great. I get tons of chocolate and molasses, with some butterscotch and caramel. Fig, raisin and date also come to mind. Raspberry is most noticeable on the finish, proving a tartness that cuts out the chocolate brownie batter sweetness. Bourbon very mild, but does warm.
F: thick in body and weight. It’s full, slick, and oil-like. Great weight and viscosity. I can tell this is a big beer AbV wise.
O: as it warms even more and practically room temp, the raspberry flavor has really meshed well with the chocolate. It’s big and bold. Chocolate covered raspberries. At 14 percent, drinks way easier than it should. This is great. I am very grateful to have tried. Cheers!

Tasted in a Rastal Teku from a bottle on October 5, 2018. Bourbon barrel aged Imperial stout with cacao nibs and raspberries. This decadent dessert beer drinks like the liquid form of its chocolate truffle inspiration.

Such an amazing beer. Poured into two FO snifters. Smell is sweet raspberry and cherries. Trying not to say jammy, but it's jammy. Getting the alcohol up front, then the slightly bitter imperial stout, then comes the chocolate and raspberries and cherries on the back end for quite some time. Wish I had more!

I expected a bit more raspberry out of this one, honestly. It still tastes very good though. The raspberry comes across as a light jam sweetness, with much more decadent fudgy and sweet chocolate, a nice balancing roast, with some bourbon nougat flavors as well. There's a touch of oak, too.

This is medium bodied, with absolutely no booziness, which is very cool. It's surprisingly drinkable.

This is not quite my favorite Bottle Logic that I've had, but it's still an impressive beer.

Received in a trade and shared with JLindros. Gotta love Spaceballs reference

O - Overall this was a very solid imperial stout. The raspberry notes are phenomenal along with the barrel. Excellent.

I tried the 2017 and 2018 batches side by side, but found many similar characteristics.

The beer pours syrupy and dark, with a thin lace that slides down the glass without much effort.

The nose is characterized almost completely by sweet jamminess. The raspberries are so predominant, with chocolate and roasted malts keeping the peace.

Chocolate and raspberry are the flavor focuses here, while coffee interplays with these qualities and leaves a subtle but apparent roasty bitterness in the finish.

The body is medium in thickness , and the syrupy quality works well with the flavor profile.

Aroma: the raspberries just pop right to the nose. Actually chocolate laden raspberries. Very sweet and desert like. Hints of cherries as well.

Taste: immediately taste the warmth from the alcohol that is quickly followed by chocolate covered raspberries. It a sucker punch to the mouth, tart raspberries and cherries, dark and bitter chocolate, bourbon with warmth. It’s sweet, tart, with a full depth of flavors.

Mouthfeel: full-bodied with warmth from the alcohol.

Overall: the name stands for itself, the raspberries really come through, much more than I expected actually. It’s just not as jammy as the Backyard Rye.

Pours thick & dark, and the first smell you get is all raspberry. Not the artificial flavoring, cloyingly sweet raspberry, but fresh box of raspberry smell. The taste matched the smell, starting off with the sweet hint of raspberry and finishing smooth with the barrel aged note. It's incredible well balanced, coming through on the promise of raspberries without overpowering the beer or making it undrinkably sweet after a few sips. Currently sitting on some 2017 as well, can't wait to try the flavor with more age.

500 ml bottle. 2017 release
Pours an oily brown with medium soapy bubbles. Highlights of ruby around the edges. No lacing left.
The nose is raspberry jam, Belgian chocolate.
Wow. This beer is complex but so simple. Layered but so well put together. Soft chocolate notes mixed with raspberry jam. A perfect raspberry truffle. Flawless balance between the two. No heat, no booziness. Finishes with a rich milk chocolate and just a bit of roast.
Huge, thick and chewy mouthfeel. Velvety and slick going down. Coats the tongue.
This beer is great, a big beer with big taste without the flaws some big beers tend to have.

Deep black body with a beautiful brownish head. Cocoa pieces in the glass after tasting.

Nose is outstanding, I couldn't remove my nostrils from the glass, very jammy forward, the best use of raspberries I've smelled in a stout. Other than berries, we can notice cocoa nibs, candi sugar, booziness, smoked malt.

A very smooth and thick stout, gives that warmth in throat remembering us that it's 13.7%.
First try for Bottle Logic, can't wait for the next one!

The Jam is amazing in this beer. It's a weird one, because the fresher you drink, the better the jam will taste, but the longer you wait, the better the bourbon will come out within the stout. The best mix of fruit in a beer ever.

The aroma is ridiculous with fresh raspberries, oaky notes, bourbon, dark chocolate, smoked grains, peat moss and cocoa powder. A near perfect desert nose with tons of fruity complexities that blend perfectly with the char and chocolate notes.

So smooth it’s stupid, hiding the ABV completely while keeping the sweetness level in check. My first beer by Bottle Logic and I’m very impressed. An outstanding brew.


Jam The Radar from Bottle Logic Brewing
Beer rating: 98 out of 100 with 327 ratings