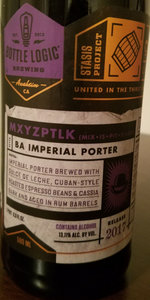 Notes: Pushing tiramisu to a rum-soaked fifth dimension was a task hand-drawn for the collaborative forces of Bottle Logic and J. Wakefield Brewing. This mischievous combination of in-brew Dulce De Leche with finishing additions of cassia bark + Cuban-roasted espresso beans on a rich porter base made for a thick, sticky, rum-barrel-aged kryptonite.
View: Beers | Place Reviews
Reviews: 8 | Ratings: 64 | Log in to view all ratings and sort

Dark pour, nearly black with a great viscosity but not too much present head or lace. A great appearance to this beer, almost forgot I was drinking a porter.

Even after two years the cassia hits you hard right off the bat. It’s soft but definitely the first adjunct you get on the nose. Balancing it out are undertones of brown sugar and dark roast coffee beans, two strong adjuncts that cut through the cinnamon-like aromas just enough.

The flavors on the palate were overall milder than the nose, with no single adjunct standing out too much. This evenly balanced combination of caramelized sugar, coffee, dark fudge, cinnamon, and boozy Barrel combine to truly emulate a cross between traditional rum cake and tiramisu.

As mentioned about the appearance, this imperial porter really gives off some barrel-aged stout viscosity. The barrel gives a nice warmth and the carbonation is soft and doesn’t distract from the overall experience. Sticky sweetness on the tail leaves behind a residual mouth-coating along with some more of that potent rum barrel burn.

Deep black body, no head, no lacing.
Nose is a lot of cinnamon, coffee, vanilla, bit boozy.
Hard to describe taste, there is acidity, astringency from the coffee?, booze, finishes dry.
I don't know what to think about it, I couldn't finish my glass at the end of the tasting.

Oil slick blackish-brown with a fine, thin tan ring fading to nothing.

This is almost like Sunday Brunch--and if you know me, you know that is high praise! Wow. Smooth, and slick, I'm getting toasted cinnamon bagel with rich medium roast coffee that's sweet and sticky, finishing semi-dry.

It doesn't hurt that Bottle Logic was pouring this unlisted bottle for those waiting in their line for Number Crunch or Jam the Radar. Easily the best brewery at Hunahpu's Day 2018 in my book.

L - Pours a dark motor oil color with no head.
S - Great coffee and cinnamon notes. I also get fudge, dark chocolate, and creamy caramel. Reminds me of Rue D'Floyd without the tartness of the cherries.
T - I get a good amount of coffee ,dark chocolate, and caramel throughout. I didn't think the cinnamon was overpowering. There is some rum heat on the finish.
F - Good mouth feel. Creamy with a very dry finish.
O - Great desert stout. I wasn't absolutely floored by it, but it was very good.

On tap. This beer was dark brown/black. So many crazy flavors going on in it. It reminded me of the BL beer that got infected before it was infected. Awesome barrel flavors. Cinnamon and coffee fire. Wow this was fun to try.

If i ever doubted Bottle Logic, that is over. I dont even like dulche du leche (or whatever) but this beer is phenomenal. Huge thick creamy body, sweet with vanilla and i guess du leche, Rum barrel is present but not overwhelming and melds well with the stout. Delicious

Very dark appearance with slight tan head that dissipates quickly. Aroma is a nice blend of cinnamon and chocolate. Taste is very strong cinnamon with a touch of chocolate. A little thin.

Pours surprisingly thick for a porter with almost no head to speak of, or that lingers. At first you get hit with a nice bit of barrel, followed by cinnamon and as the inhale progresses you get the sweet burnt dulce de leche smell. The coffee kind of lingers and melds all through out the whiff. Little bits of vanilla from the rum as well. The nose is very reminiscent of leche borracho actually. The taste is not as well balanced as leche though. Starts off a little sweet and the middle is dominated by the dulce de leche and followed up by the cinnamon. Once again, the coffee is kind of present and melded all through out. You get a serious rum alcohol bite on the back end as well. The immediate aftertaste is kind of reminiscent of a campfire smoke flavor. Very silky and just the right amount of carbonation. Overall this beer is excellent but the flavors are still kind of fighting each other and have not merged entirely.