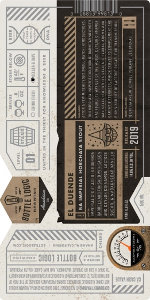 Black color on the pour with a rich dark tan head, this is a gorgeous imperial stout. The nose is outrageously cinnamon forward, like “churros from Taco Bell” cinnamon forward, which isn’t necessarily a bad thing, but a bit surprising given the barrel (which is also present) and vanilla beans (which are not present).

The taste is all about the cinnamon and the barrel, with a bit of chocolate at the end of the taste, and the slightest bit of vanilla. The mouthfeel is spot on, with an almost chewy depth to it.

If this beer had a bit more vanilla to balance the cinnamon and barrel flavors, I may have spontaneously combusted. It is still excellent, and fortunately I have another bottle to age to see if the vanilla comes forward to dance with the cinnamon and the barrel.

Stark oily black with a tall pocky mocha foam swiftly collapsing to nothing but a silky surface.

Upon opening it smells eggfuckingzactly like horchata right out the bottle--that rice, vanilla and cinnamon refreshingness.

The taste up front has a strong punch of booze, as the slick silky body gives off more of a spiced rum character than bourbon, before gliding into lightly spicy yet vanilla smoothed cinnamon bark, which slowly translates into that creamy rice milk treat flavor.

This has a fairly minimal fluid carbonation running into a semi-dry swallow bringing out the flavor of Red Hots at times, without the heat. As it warms, a lil caramel dulce de leche pops in occasionally.

L: pours black with a small fuzzy dark head that fades fast
S: holy sweet cinnamon and sugar. Smells like the middle of a cinnamon roll. Lacks barrel
T: very sweet like there nose, big cinnamon and some barrel now. Tasty
F: medium thickness with a little cinnamon tingly on the finish.

500 mL bottle poured into a snifter.

Near black with a 1 inch medium brown head.

Taste: bourbon, cinnamon, rice milk, caramel. Finishes sweet with more cinnamon lingering on the palate. A touch of dark chocolate presence once it opens up. A bit sweet for my tastes but the flavors are excellent.

This beer appeared to be the darkest shade of brown but not quite black. I had a 6 oz pour at the brewery. This tastes very sweet with medium cinnamon flavor and the strong bourbon barrel flavor cut through. It was not bad but just too sweet and a 6 oz pour was enough for me. The sweetness and heaviness did it for me but by no mean a bad beer.

Wow. First sip. First thoughts... WTF? Like, Raul swears on his lil soldier... Like the first time Raul saw Kim K’s vhs debut... And like Yasiel Puig game 4 homer before Dave fucked them again... this beer is on all levels. Bottle a Mexican moon at twilight and this is what it would taste like

On tap at EBF in Boston, MA.

This one pours a fairly dark black, with a small white head, and not much lacing.

This one smells like cinnamon candy, booze, vanilla bean, dark fruit, and bourbon.

This has a slightly off-putting sugar and weird finish, but up front it's pretty nice. There's lots of vanilla, and nice barrel, but the cinnamon feels slightly artificial, waxy, and weirdly sweet.

This is slightly thin, but very creamy, with a lower level of carbonation.

This is very far from the best Bottle Logic I've had, but it's still nice enough, and certainly interesting.

Sample at EBF so not a full review.

Lots of cinnamon in the flavor, taste is creamy, sweet, low booze but nice bourbon and barrel flavor. Vanilla in the background.

This has a bit of an oily feel which throws everything off a bit for me. Thick and creamy.

Good flavor and aroma, Feel is a bit off for me, coats the tongue.

Big rich stout with lots of cinnamon flavors throughout the nose and taste. Overall the spices might overpower a bit on this one but still very good. Wouldn't mind trying again someday.