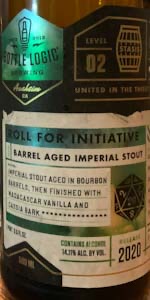 Rated by tehveeonesee from Nevada

Rated by badmotorgrunge from Illinois

4.39/5  rDev -1.8%
look: 4.25 | smell: 4.5 | taste: 4.25 | feel: 4.5 | overall: 4.5
Poured from fridge temp. Pours jet black with very little head. I immediately get a huge dose of cinnamon on the nose. Vanilla and tonka beans, along with milk chocolate are also dominant. I am also getting a lot of nuttiness - perhaps walnuts. At least on the nose, I am not getting a huge bourbon influence. Moving on to the taste, this is super smooth and creamy. Lots of cinnamon, licorice, chocolate, vanilla, dark fruit, and some bourbon come through. There is a sweetness upfront, but a bitter aftertaste. This is just complex enough, and well integrated. Overall, this is a really nice stout with a great mouthfeel.
May 25, 2020
Rated: 4.45 by NolaHopHead from Louisiana

Near black with a half inch light brown head.

Tase: Follows the nose. The “cinnamon roll-inspired” theme comes out perfectly. Flavor profile is bourbon-glazed cinnamon roll. Finish is sweet but not overly.

Pours a dense, oily black body with a short-lived effervescence and a slight frothing of dark mocha foam that begins to fade just as it forms a thin layer over the surface; no lacing is present, while a creamy collar remains throughout.

Aroma cold is overwhelmed by cassia bark and earthy spice, with a vague suggestion of charry, barrel sweetness lingering in the background; as it warms, sweet cinnamon meshes beautifully with creamy, soft vanilla; there's a boozy weight across the bouquet, though the bourbon remains subtle in the backdrop; sappy, earthy tree bark and encroaching touches of vanilla frosting ease into the back end softly and in sync with the resting the bouquet, though still heavily overwhelmed with cassia bark to the end.

Taste brings a maintained cinnamon heat upfront, phasing into tree bark and a pleasant amalgam of earthy spice before toasted vanilla cream evolves over the mid-palate; barrel char and wisps of bourbon appear on the very back end, though they're supplementary as the cassia bark largely overwhelms.

Mouthfeel offers a medium-thick body with an expected low carbonation; a slickness upfront makes way for an oily texture and progressive thickness over the mid-palate, which eventually eases to a level and malty grit on the finish; a touch of earthy spice adds a zest and keeps the palate engaged through the swallow alongside a mild, warming booziness.

Maybe strange, but I would characterize this as a pastry stout that lacks almost any of the derisive features of the style; sharp along the palate, not syrupy whatsoever, and a focused flavor profile. That all being acknowledged, this stout is unrepentantly one-dimensional, embracing the peak refinements of earthy spice to the point of naturally resembling, in tandem with a steady vanilla presence, a cinnamon roll. Far from cloying and mesmerizing on the palate, this simply comes together differently, and for the most part, it is a successful expression of eccentric flavor in a barrel-aged stout.

4.19/5  rDev -6.3%
look: 4.25 | smell: 4 | taste: 4.25 | feel: 4.25 | overall: 4.25
Jet black body with a trace of a brown ring. Powerful cinnamon leads the nose with a ton of sweet vanilla, with pie spices, cassia bark and bourbon as intermediaries, too much cinnamon for my preferences, but will age well. Taste brings more bourbon depth which helps balance the cinnamon more, very sweet but tasty, has some chocolate fudge mixed in there too. Body is thick yet sneaky spicy, with booze and viscosity to keep your around. Much prefer FO to this variant, but still a good dessert stout
Mar 16, 2020
Rated: 4.38 by SadMachine from New Jersey

4.55/5  rDev +1.8%
look: 4.25 | smell: 4.75 | taste: 4.5 | feel: 4.5 | overall: 4.5
500ml bottle, 2020 edition, snifter glass. Dark black body, one finger offwhite head, good retention, no lacing. Smell is massive cinnamon, vanilla and cake frosting. It seriously smells like Cinnabon. They nailed the nose perfectly, wow. Flavour has more of the cassia bark/cinnamon than I'd like. I'd prefer more vanilla and chocolate brownies like the earlier batches of Fundamental Observation, but that's a small gripe. Medium fuller bodied, good carbonation, big cinnamon spice all the way through the end.
Feb 17, 2020
Rated: 4.22 by impending from California

Reviewed by HattedClassic from Virginia

4.38/5  rDev -2%
look: 4.25 | smell: 4.25 | taste: 4.5 | feel: 4 | overall: 4.5
The beer pours a nice looking brown foamy head that looks pretty good and dissipates at a medium pace. The beer itself is a good looking dark chocolate brown that strongly resembles a nice black. The texture is also pretty good and has a bit of thick and viscous movement to it with a light thinness from the barrel aging.

The smell is pretty good. The smell mainly consists of strong Madagascar vanilla that is bittersweet but not such that it detracts from the beer. Rather, it is intense enough to a good note to it. The other note is a good cinnamon note. The bourbon and a light alcohol note come out in the finish.

The taste contains the same notes as the smell but are less intense and more smooth. The vanilla is bit lighter, which allows the sweet chocolate to come out a little more both in the beginning and the finish where it lingers. The bourbon is also more noticeable and a bit warmer than in the smell. Even though it intermixes with the cinnamon notes, the bourbon is certainly more noticeable.

The feel is pretty good. It has a heavy and velvety body with a bit of thinness with a tiny bit of carbonation to it.

Overall this is a pretty good beer that was done very well and worth getting. My only regret is not aging this a little bit longer to let the imperial stout notes come out.