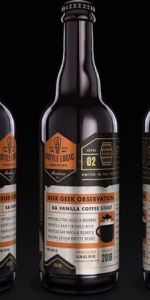 Fundamental Observation meets Mikkeller's Beer Geek Breakfast in our first transatlantic collaboration! The grain bills of these two legendary beers were blended, brewed, barrelled for an average of 18 months, and steeped on Madagascar vanilla beans before being finished with Coldbot Coffee's Panama Geisha beans.

incredibly thankful to have had this shared with me, no doubt a rarity due to the bottle logic name, but im in for the mikkeller, a huge fan of this series, its neat that the beer geek name has come up in a lot of collaborations they have done, but surely this is the headiest of them all right?! it must be! geisha coffee is an exciting add, but im not sure i can appreciate it specifically, which is curious with such a distinctive varietal, but there is so much beer happening that its just a coffee layer, high end for sure, but somewhat unspecific even to my burgeoning coffee nerd palate. not much head from the bottle, super viscous pour, near black, with strong whiskey and raisin notes coming right now, less dark roast than i remember in either of the base beers. strong and silky vanilla here too, the beans are obvious on top of the whiskey, its woody and mellow and maybe has only a trace of oxidation in it, the label says 2019, but i dont know when it came out, perhaps the geisha has receded some. the flavor is awesome, different than the base beers, a new entity, which i want in a collaboration. i get the coffee, but i want it to appear more special in this. the whiskey is strong, and it does take over some of the nuance, maybe not as complex as some of these, but it sure is suited to all the vanilla in here, and the roast rises up more than i could smell, this now being quite bitter and balance, way less sweet than it sounds with the long barrel ageing and the vanilla beans. some tobacco and licorice come out of the depths of all the malt, maybe even a little rye spice set against the smooth oak. velvet texture to this, not much carbonation, lots of alcohol but its not offputting. palate coating but not too sweet, wintery for sure, cozy and comforting, and an easy beer to appreciate as being next level in quality, even after a full day of sharing heady ales. id like to try this one in a more isolated context though, as it didnt quite stand out as differently as i think i wanted and expected it to. dont get me wrong, this is special and amazing, but its a coming together of legendary beers, so i hoped this would change my life. either way, thankful for the experience and sure glad this was born into the world. not to be missed!

Near black with a thin mocha head.

Nose: vanilla with a good dose of coffee and dark chocolate.

Taste: follows to the nose. Not quite as intense vanilla flavor as Fundamental Observation but the coffee adds a nice extra dimension.

why am i getting strong aroma of chili pepper????? this is thin(ner) and easy to drink, but getting a weird coffee-ness to it rather than the typical coffee i would expect. definately LESS sweet than othe BL stasis series.....

Tasted from a pour at the brewery. Pours motor oil black with no head. Nose is caramel, graham cracker, bourbon, vanilla, and chocolate. Pretty amazing. The taste follows the nose, but with the addition of some roasted malts/burnt wood. Tons of lactose, fudge, vanilla, bourbon, and greatness. This is a treat. Mouthfeel is super creamy. Overall, another great one from BL.

Sample at Mikkeller Beer Celebration Copenhagen 2018, Red Session. Aroma is sweet and malty with lots of chocolate notes. Taste is quite balanced, like a chocolate dessert with bitter cocoa finish.