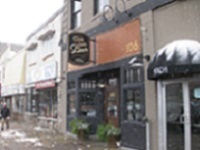 Reviewed by CopperMtnPlowboy from Ohio

4.58/5  rDev +9.8%
vibe: 4.5 | quality: 5 | service: 4 | selection: 4.5 | food: 5
Visited while on vacation in mid-August 2020 with state mandated masks in place. Nice place, takes advantage of modernizing an old downtown brick building, which I like. Great photos of the industrial age Cadillac on the walls. Brewery is in the basement, food and taps are upstairs (ground level from the main street). Great location overlooking a water park by the lake. The kitchen, featuring a wood-fired brick oven - is open for viewing.

Took 4 in the family - 2 college age sons - and started with an "OK" appetizer of Ahi tuna. But then all 4 of our meals were among the best meals we've ever had. I had the Smokestack Panini, my wife had the BLT wood fired pizza, and my sons had the Sunnyside Up Burger and the Nashville Hot Chicken sandwich. We all shared our meals, then agreed to do something we've never done previously while on vacation- come back a 2nd time to the same place for dinner. (Which the 2nd night was equally as good - try the Italian melt!)

In all honesty, the beer was good (i had a flight), but because the food was absolutely outstanding, I've almost forgotten what the beer was like. Most of the beers available were not their own.

I will be back if I'm ever in the Cadillac area again.

4.09/5  rDev -1.9%
vibe: 4 | quality: 4 | service: 4.5 | selection: 3.75 | food: 4.25
Stopped in a Saturday afternoon after the lunch rush. Nice size location with parking behind the building. Decent size bar and plenty of tables. Staff friendly and knowledgeable. Lots of beers on tap but only one Clam Lake beer available; rather disappointing. Food was good.
May 28, 2022
Rated: 3.78 by Dactrius from Netherlands Antilles

3.98/5  rDev -4.6%
vibe: 4 | quality: 3.5 | service: 4 | selection: 4.5 | food: 4
My wife and I stopped here as our first stop while on a weekend pub crawl. The brewpub is located in a storefront setting on the main drag in the downtown area. The interior is like a neighborhood bar with a long bar on one side and tables along the other wall. We liked the vibe. This visit was a late lunch and to try the beers. The place was not busy on a snowy Thursday afternoon, so service was very good.

They had 7 beers of their own on the menu plus 30 guest beers and 3 guest ciders. A list of 21 beers 'Coming Soon' was also a part of the menu, as well as a list of 33 bottles/cans that were about half macro beers. There were also 25 wines on the list. We wanted to try their beers so we ordered two sampler flights of 4 each and added one guest beer to make 8. All of their beers were brewed to its respective style, and some went moderately beyond the typical style characteristics, although we did not place any of then into a 'notable' category. The beers were good.

The food scored a bit better, and we gave a B rating for the two items that we ordered. It was a good start to our pub crawl, and this place is very worthy of a visit.

Reviewed by magicsqurill from Michigan

Reviewed by MarcatGSB from Michigan

3.83/5  rDev -8.2%
vibe: 3.75 | quality: 4 | service: 3.75 | selection: 3.75
Stumbled upon Clam Lake Beer Co. a couple weeks back while passing through the Cadillac area. This is a welcomed addition to this part of the state, as there are very few options to get a good beer while travelling through the northern part of Lower Michigan, without actually committing to the lake shore route, or heading all the way over to Short's. This is perfect.

They just opened in the summer of 2013, and you can tell they put alot of work into an older historic building. Nice lighting, beautiful bar, open kitchen. They have some tables in a back room that is semi-secluded from the rest of the bar, a touch quieter. Kind of a sports bar vibe, as they have at least a half dozen televisions around the joint, including a couple in that secluded back room, almost as a private TV.

They had about 40 drafts...MOST of them were craft choices, but they also had Bud Light and some other swill on tap. I guess you have to try and please everyone? They did have good selection of drafts, and I'd assume those will improve as they get more clout with their local distributors. The bartender informed me that they are putting a small brew house in downstairs, and this place will eventually be a brewpub. Even better. Maybe get those BMC's off tap, and replace them with your own light bodied lagers and ales.

The food menu was diverse, featuring a brick pizza oven. Looks like they did some other things in the brick oven as well, including sandwiches and quesadilla's.

I think they will do fine. Enough local clientele to make the place work, and then in the summer, Cadillac booms with people from all over. Good luck to them, it's a welcomed addition to the Michigan beer scene, and I know every time I am travelling to Grand Rapids I will make it a point to stop and have a quick pint.