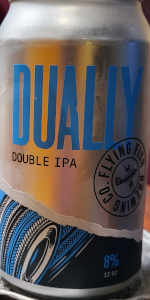 3.98/5  rDev +3.6%
look: 3.75 | smell: 3.75 | taste: 4.25 | feel: 3.5 | overall: 4
A duo of twelve ounce cans have been emptied into a clear glass liter mug. A foamy white head looms a little larger than normal, but it doesn't have tight bubbles and it recedes quickly. The scant lacing it leaves inside the glass is irregular. The color of the brew is a semi-opaque and dull golden amber. The hop smell is dank, earthy and a little piney, muted in a New England style IPA. There's not much malt for the nose to pick up. The taste brings a nice combination of hop flavors, but the nose was right about the malt. There's very little of it to taste and that makes this seem incomplete and it hurts the mouthfeel. Initially, the hops do seem muted, but they transition to wonderfully biting at the dry finish. There's an aspect of pine and citrus, but it's not dank and only slightly resinous. For such a thin body, this does a good job of keeping the ABV at a pleasant taste level. This isn't bad and hop heads should like it, much. Those that like Imperial IPAs with some malt body and taste counterbalance will have to drink something else.
Mar 20, 2022
More User Ratings:
Rated: 3.5 by chicagoish from Pennsylvania

Smell is grapefruit pith, limited/no malt, maybe some mixed tropicals, limited mango as noted on the can; a bit thin.

Taste is also quite pithy, thin in malt offering, limited hop depth and tastes more like a strong session ipa; again expecting a DIPA this is disappointing, especially from Flying Fish.

Mouthfeel is low carbonation, awkward sweetness and bitterness that does not linger well.

Overall a disappointing selection - not advertised as hazy/neipa but presents as such and appears to want to be in that style; flavor is thin, limited malt, overpowering pithiness and awkward biting/sharp hop character but not from bitterness.

Notes via stream of consciousness: I've just sampled their Citra pale ale so I might as well move onto the Dually. What is it? It's a double IPA at 8% but that's all there is on the label except for a line drawing of what looks like an automobile tire. I can't figure out what that means. Let's taste it then... it's poured a very hazy golden body beneath a short head of white foam. Plenty of fine bubbles can be seen rising steadily below. The aroma is a little peach-like, a little-berry-like, and a slight bit citrusy. It has just about as much hop aroma as their Citra pale ale did, and maybe even less. That's disappointing. Hahaha! I just noticed that the label reads "BOLD AROMA"! Now that's hilarious. The flavor follows. Now I know that double IPAs generally have less hop aroma than standard IPAs but this has even less than their own pale ale, and there's not a whole lot of hop flavor going on either. The malt is wheaty, and I'm pretty sure there's some oats in there as well but they're not completely clear and it's not a very malty beer anyway. I think the flavor is hindered overall because the body is fairly thin, at least for a double IPA, and there's not a whole lot of malt for the hop acids to hold on to. It comes across as a kind of session IPA except that there's some real strength to it. I really liked the subtle berry-like note in the aroma but that's nowhere to be found, and the peach is being shouldered out of the way by the now stronger citrus character (lemon, orange). I'm finding some apricot, pine, and a light touch of grapefruit. It doesn't seem bitter but neither is it sweet, and it seems a bit edgy. Is that "hop bite", or is it just a rough bitterness? Is it alcohol, or perhaps a combination? Regardless, it's not smooth. In the mouth it's medium-light in body and gently crisp - there, at least, it's quite smooth. The head held up fairly well and I still have a solid, creamy surface covering and it's left behind some pretty nice lacing. I'm thinking that the appearance is perhaps its best feature. Hmmmm... I'm trying to figure out how to sum it up and perhaps that last line is the best way to do so. I can see what they were going for, a kind of juicy NEIPA thing, but that's not what happened. This is a complete disaster, and I'm guessing that that comes from cutting corners. How do you get 8% out of it and it still comes out thin and lacking in malt flavor? Because you didn't use enough malt. The same goes for the hops. I can tell that there are some Mosaic hops in there, they're my favorite, but they're completely watered down. As a double IPA it's just lacking at every turn except for the appearance, and to be honest, even as a pale ale it wouldn't be that great.
Review #8,029

Reviewed by Antg8989 from New Jersey