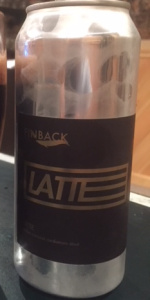 Aromas of coconut, coffee and cardamom stand out. Notes of dark chocolate, toffee and butterscotch. The aroma is sweet overall.

Sweet and malt forward with notes of caramel, toffee, and buttery biscuity malts. The coconut and cardamom go well with the milk and dark chocolate flavors, while the coffee compliments the lightly roasted malts. A touch of earthy hops add some modest bitterness for balance. The finish is smooth.

Full bodied and smooth. It feels mouth coating on the palate. The carbonation is moderate to gentle.

This was a nice stout overall. It has some robust strength yet is not quite an imperial, making it easy to drink.

Dark tan colored head. Fairly small, but still dense. Oddly, it dissipates quickly and completely. No lace. The liquid is nearly black and no light passes even along an edge.

Strong black coffee aroma. There are some notes of very dark chocolate and graham crackers. No chalk.

High carbonation with a thinner body makes this beer feel thin. The flavor, on the other hand, is very strong. The taste is a little less coffee and more unsweetened Baker's chocolate. There's some booziness but it's without the warmth. The coconut is present but subtle. Do I detect some cinnamon? I do not get any cardamom.

Pours dark brown and opaque, thick and oily looking, with a flash of head and some light lacing. Aromas of lots of coffee, roasted malt, milk chocolate, lactose, some vanilla and coconut, light cardamom, a nutty aroma. The coffee also leads the flavor, but the cardamom really pops out here. Milk chocolate, malt, less vanilla than the aroma, some coconut and caramel, lactose. Smooth, a little creamy, a good medium to full body, appropriately carbonated.

16 oz can from corm44 poured into Empyrean snifter.

Deep thick black color with a beige/red head of 2 fingers.

Flavors of cinnamon, coffee, grass, chocolate, rubber, and a finish of fudge and marshmallow.

Feel is about on par for a basic oatmeal stout, though with the flavors represented I feel it could benefit from more thickness. Slightly dry finish.

Overall, this beer is pretty good. I enjoy the aromas and flavors. Oddly enough though, it reminds me so much of lubriderm, and what I did with that and certain magazines when I was 13. It's uncanny.

Pours black with three fingers of dense, caramel-colored foam with hearty head retention. Aroma is sharp, hitting coconut, cardamon, coffee, milk, and roasted and toasted malts. The coconut and cardamon are at the forefront, with the rest filling in the gaps. Flavor profile is heavy coconut and cardamon, with glimpses of coffee, milk, and roasted and toasted malts. Mouth feel is splendidly smooth, with a medium-thick consistency that really bolsters this 7% ABV beer, making it drink a little heavier. Overall, coffee is light for a latte beer, with coconut and cardamon being the main story line. Still, it's a filling and fairly-thick stout for being 7%. Very enjoyable.

This is one of those beers that gets better with every sip. The dark roast coffee is the star of the show, with coconut lingering in the background. It contains lactose, giving it some sweetness but it is not overpowering at all.

Finback is one of the more creative breweries out there. They have some misses for sure, but this one is top tier, best stout I've had from them.

Thanks Spence.
This was poured into nonic pint glass.
The appearance was a full dark black color and seemed to pour like motor oil. Mild cap of a little off white foamy head. No lace.
The aroma had a wonderful meshing of sweet and roasty coffee, sweet and semi-spicy cardamom which comes in for balance.
The flavor yields to the sweetness initially but seems to develop a nice roastiness and subtle coconut taste. Cardamom melds with everything with a keen underlying spice. Nice aftertaste of roast, sweet coffee, milk chocolate, coconut and cardamom.
The mouthfeel was about medium bodied with a fine sipping quality about it. Carbonation felt good. ABV felt on par. Finish was quite smooth with the chocolate characters rolling into each other.
Overall, what a really awesome milk stout with an extra addition of cardamom making this one unique. I'd definitely have again.

Leaves the can a thick, jet black with an oily consistency; a slight bit of caramel foam is given almost no opportunity to form at all, leaving a slight ring around the edges of the glass and little else; a fair bit of lacing does hold to the glass, though, albeit mostly in small trickles.

Aroma brings plenty of roasted coffee integrated excellently with slightly earthy, almost toasted coconut, a combination which brings about some distinct peanut notes and occasionally some milk chocolate; a hint of cardamom is present to add a spice that rounds out the finish nicely and in a way which highlights the more subtle herbal tones within the savory, malty foundation.

Taste sees bursts of cardamom spice influenced by hints of vanilla to the forefront, over a bed of roasted coffee and notes of milk chocolate; the coconut has faded, but its uniquely earthy sweetness still permeates the flavor profile quite a bit; there’s again, really enjoying the smooth balance of earthy and sweet tones, the former of which integrate a light bitterness rather effortlessly.

Mouthfeel is slick and oily as the pour may have suggested, but there is minimal stickiness while the malt profile smooths things out nicely; medium body, slight carbonation, and absolutely no hint of booze either; easy going down, and not heavy at all in spite of the different flavors at play.

There was a lot going on here, but everything from the spice to the sweetness to the earthier, malty tones fell in line in a way that made this beer surprisingly approachable. It’s unique, no doubt, and not without its inconsistencies, but overall a very good stout with a well-constructed order to an eccentric flavor profile.

Finback is back at it again, this time with a flavored stout, which is something pretty far outside of their typical hoppy pale ale wheelhouse. These guys are usually really creative with their recipes, and their treatment of adjunct ingredients tends to be rather solid most of the time. Don't think I've had a flavored stout from them, though, so let's see how they do with such an idea.

This pours a thick and dark, oily black color with a thin, tiny ring of mocha-colored head atop the body. There's a deep, garnet-like hue to the first few millimeters of sub-surface beer in my glass if I hold it up to light, but it's pretty much impenetrable darkness below that. I was kind of surprised by how pathetic the head was here, though, to be honest. Even with a rather intense pour, I was unable to get it to build up more than a half-finger, which is a little disappointing. In essence, however, it's kind of like a coffee pour... so if I think of it that way, it's not that bad.

The nose is spot-on with what's written on the label, and nothing overpowers anything else. My initial fear was that the cardamom was going to be a bit too intense compared to the comparatively-delicate element of coconut in this coffee stout. Of course, the cardamom is layered on rather thickly here, but it doesn't really crowd out the coconut and roastiness as much as I figured it would. Slight notes of dark fruit, vanilla and baker's chocolate round the whole thing out. Well constructed, for sure, especially if you're a fan of the added ingredients!

The flavor profile is nice and roasty with strong flavors of lightly acidic coffee (notes of blueberry and raspberry in there) combined with the full-bodied, almost savory spice of cardamom. The coconut is likely more of the "toasted" variety than, say, coconut milk or flesh, and it seems to lend some surprising smoothness to the backend as well as its signature nutty and somewhat tropical element. I'm well-versed in Finback's use of coconut thanks to their amazing coconut IPA, Smooth Beats Miami, and this is somewhat like a colder weather version of that beer. Great stuff! Glad I got another.

The feel is fairly creamy, though it overall seems to sit on the medium side for the non-imperial stout category. It's not "light"-bodied, of course, but the strong roast characteristic is a little "porter"-like at times. That said, the flavorings alone give it a thickness that classes it out of that style, for sure. Carbonation is on the light-medium side; detailed but not overbearing, with a sweetness toward the end that never feels cloying. Well done, but I would prefer this to have a grainier profile... in a sense, I wish it were a little stronger so the flavors were better supported on the whole. That said, it's still an awesome, enjoyable beer with a lot of uniqueness points awarded.

16oz. can into Night Shift stemware.

Beer pours pitch black. Dense too... for a regular stout. Poor head retention though. Nose is coconut, coffee, lactose, milk chocolate and a touch of sweet soy sauce. Not sure what cardamom smells like but I don't get anything else here really. Rich and aromatic. Beer opens with hints of coffee, lactose and coconut. I can't say I've had cardamom in any form before so I'm not sure what the taste profile should be... but the addition adds a flavor that can be described as raisins plus brown sugar plus sweet soy sauce and plum/prune sugar. It really works well here. More coffee bitterness in the back mixed with milk and dark chocolate and more sweet coconut. Coffee bean bitter bite at the finish. Delicious! Body is medium with low carbonation. Silky smooth on the palate and goes down warm and dense. Finishes very clean with just a sprinkled in bitter aftertaste.

For a regular stout, this is up there with the best of them. The body is fantastic and there's great complexity here. Definitely worth trying.