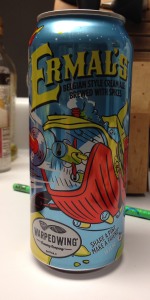 Notes: Summer picnic. 1959. Tool-and-die man Ermal Fraze grabbed a flat-top can of beer and asked, "Anyone bring an opener?" To his horror, no one replied, "Yes". Out of the ashes of this indignity Ermal rose like a phoenix. And bequeathed to mankind a glorious invention, now known as the pop-top can. Ermal's Belgian Style Cream Ale. Light, creamy, mildly spiced with a symphony of citrus notes. Pop the top and let them out.
View: More Beers | Place Reviews
Recent ratings and reviews. | Log in to view more ratings + sorting options.

Purchased as a single 12oz can from Kroger for $1.69. Poured into a nonic pint glass.

L - Pale yellow with a three-finger yeasty eggshell-white head.
S - Coriander, white pepper, and yeast. Slight wheat base. Hint of candied orange peel and clove.
T - You could tell me this was a Hefeweizen and I'd believe you! Strong notes of clove and coriander, followed by a punch of banana and bubblegum. Slight bitterness, but not overwhelming; heavy freshly-baked bread notes. Almost a doughnut-like finish, with a slight nutmeg/allspice.
F - Slight carbonation - almost nitro-tier. Very drinkable. Refreshing and medium-bodied. Very satisfying to drink.
O - I really, really like this beer. For the sake of being objective, this hits all marks of a good cream ale! The flavor profile is well-balanced and evolves into greater complexity as you work your way down to the bottom of the glass. I will purchase this again as I see it, and I can't recommend this brew highly enough. A home run for Warped Wing!

Golden orangish color with a small creamy white head. Creamy describes this beer beast cream ale I have had in awhile goes down really smooth. so delicious

First beer brewed in Dayton, visiting my brother on the Ohio River.
A) Pours hazy cloudy yellow body with a stand up white head.

I got a can of this off the single shelf from a Kroger just down the road from south metro ice. It poured a hazy orangish with white head that left some lace. The scent had a coriander like flare. The taste was potpourri in base with some yuletide spice accents
The mouthfeel was medium in body with good carbonation. .overall it was ok.

On tap at the brewery taproom. Hazy pale golden body that's topped with a decent white head.
Aroma is like a Belgian pale ale with minimal hops.
The flavor is about as one might hope... Belgian yeast meets orange cream ale.
Smooth light body and medium carbonation.

12oz canned 10/9/17 poured into vintage bow tie glass at fridge temp 5.4% ABV. The beer pours exactly like a Hefeweizen minus the big head. The head recedes to a thin ring quickly. The aroma is maybe a touch of grain and yeast. The taste is oddly spiced, probably coriander, atop a fairly nuetral malt base. Maybe there's a bit of wheat in there too. Mouthfeel is medium bodied, adequately carbonated and a little wet in the finish. Overall, ok and definitely a little out there. Pretty close to a blue moon or shock top here.

Poured from a can into a tulip glass. Slightly cloudy yellow with a decent head and lacing. Slightly sweet grassy smell. Taste is crisp and a bit bready, a bit of lemon. Not bad!

Thanks Richard and Alanna!

A: A very cloudy yellow color with a white head.

T: Bready, with a hints of cinnamon, clove, and orange peel. Interesting.

O: Overall interesting, I'm not sure if I love it or not, but it is certainly and interesting take on a style.

S: at first blush it smells like tea, then you pick out some clove light banana and a little bit of a grainy maltiness.

M: medium bodied with lower carbonation flavors cling to the tongue a bit on the end.

O: This beer is interesting it's not your standard Belgian flavor but it's not really a cream ale flavor more just as described above like drinking chai tea.

Can dated 3/24:
Pours a little grungy yellow, hazy, but with a nice whitehead.

Nose is Belgian yeast and creamed corn that don't compete, spiced with clove.

A bit light, there is a nice carbonation to this beer that initially is a bit like corn flakes with a little banana, but slowly becomes more spicy with warmth. It overall sticks to the creame side, with the Belgian yeast notes playing background. The spice plays a little bigger role.

It is dark gold in body with a cream colored frothy head.

It smells very Belgian like. Spices and yeast jump out with a bit of ripe banana and some corn like grain in the background.

It initially tastes like it smells with a biting yeast, slightly spicy corriander, cloves, and banana peel with a sublte amount of a ripe darker fruit. Then it transitions into a cream ale suddenly with cereal grains and a lingering Corn Flakes flavor.

Strictly as a Cream Ale? Pretty average. Overall I enjoyed the spin on it though.

Beer trading has become an increasingly popular hobby for many craft beer lovers. Trading allows us to get our greedy little paws on liquid beauties we otherwise would have to travel to obtain. I began trading a while back and it has become a frequent, but expensive, part in my life. If you’re interested in trading, which I highly recommend, check out The Beer Exchange to get started. I received this beer in a trade today along with some other beers I cant get in my area. I don’t recall discussing it with the trader so I am just going to assume this was an extra he decided to throw in at the last minute.

The can describes it as a Belgian Style Cream Ale brewed with spices. If I hadn’t read the can I would have assumed this was some sort of wit with a healthy addition of spices based on the way it smelled. Up front, I got a good amount of bittery citrus notes on the nose which leaned heavily on the sour lemon side instead of the more common sweet orange. I picked up other yet undecipherable spices in there, as well as a good dose of wheat.

Ermal’s has a cloudy and hazy pale-orange appearance. I poured my 16-oz can into my New Belgian pint snifter and the head topped my glass with about two fingers before I could pour out the entire can. The head dissipates quickly leaving behind a micro-thin lacing that sticks around for the entire glass.

A big punch of lemongrass and an odd peppery sting were very noticeable on the palate. In the middle there is a slight grain and wheat sweetness with lots of straw and hay. It is hard to notice much after the big wallop of lemongrass and citrus at the front. The back end gives way to more of the peppery spice on top of grassy notes, a strong herbal bitterness and faint coriander.

Overall a very drinkable beer! Belgian wits (although this claims to be a Belgian Cream Ale) are not on the top of my favorite-styles list, but I can down a few of these. There is definitely a nice, welcoming twist on the Belgian wit style (Belgian Cream Ale style… whatever) that Warped Wing brings to the table with this one.

16oz can poured into a pint glass
A: Slightly hazy light orange with a one-finger head
S: Malt, Belgian yeast, some bread & a hint of spice
T: Largely matches the nose. Malt-driven but with Belgian yeast and a hint of spice
M: Light-bodied, creamy
O: I don't know what the grain/malt bill is on this but I like the yeast and spice that make it far more interesting than a typical cream ale

Dayton, Ohio. Not known for craft beer. I like this depressed metropolis. Wish they made better beer. Wanted to like. Instead, my review can be summed up in a word: "Meh". Keep trying Warped Wing. I'll be back.

Hops are a little more evident than other cream ales I've had, but not too much. There's a slight hint of whip cream, some lager notes, a touch of clove from yeast, and those hops bringing some drying bitterness, but it's crisp. Ermal's becomes more Belgian-esque as it warms, but never becomes overly spicy.