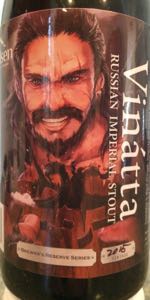 Notes: Vinátta is a bold Russian Imperial Stout that required four separate mashes to produce one six barrel batch of beer. This beer has a big, chewy mouthful and has flavors of chocolate, prunes, leather and tobacco. This is a bold beer that pushes the limits of an already extreme beer style.

Vinátta will be brewed once every winter in limited quantities.

Friendship is about strength, longevity and working together. Vinátta, Norse for friendship, is a Russian Imperial Stout brewed by friends, to be enjoyed with friends, today, or years to come. Vinátta is a collaboration with our friend Andy Day, owner of The Drinkery and Cask and Vine.

Too sweet for my RIS stylistic tastes. Heavy vinous notes in both the taste and aroma. Burnt malty bitterness underneath. Heavy bodied, smooth, with a semi-dry finish. I love the RIS style but this is not a favorite.

Really excellent but perhaps I drank this too fresh and might have benefited from som cellaring - was a tad rough around the edges. Aroma's are amazing and align per brewer's description. Would love to grab another bottle.

Finally opening a 2017 bottle of this beer I've been storing away, and decided to also give it a solid review while I'm at it. Kelsen's darker beer styles have long been lauded as their most vaunted brews, and this is likely their most coveted single release. I've had it before, but only fresh... this changes now!

Pours a tar-black color with some very, very slight brownish notes around the edges. A very thin but retentive head of khaki-colored foam builds up to a half-finger at its highest point. The surface is mostly clear and devoid of bubbles, though some wisps still remain here and there. I will say that it seems the appearance of this beer varies between vintages, and it is likely that this being a couple years old could account for the poor head formation. As such, I will give it the benefit of the doubt.

The nose here is quite rich and dominated by notes of savory meat, tobacco, dark fruit, leather, earthiness, cocoa, caramel, and dark chocolate. Some light notes of fruity dark roast coffee, surprisingly-bright herbal hops, sticky pine, and toffee. This is really holding up after years of careful cellaring, I will say that. I have had some super awful beers recently from my closet of stuff I've been keeping for years, and this does not seem likely to be one of them. This already is giving me way better vibes than Vendel with a year on it, for example. I think this is likely one of the best-smelling RISes I've ever had the pleasure of enjoying.

My first sips of this cement what I thought from the nose... this is excellent with a couple years on it. It ages spectacularly, and displays prominent savory flavors combined with nice coffee and chocolate maltiness. Dark, rye-like grains with a superb spice and pine-y focus from the hops appear in the mid-palate, while dense caramel sweetness and a round, palatable mouthfeel become apparent and really help out the entirety of the experience. Dense toffee and really nice, sweet chocolate suggestions help balance the insane bitterness that this still commands after several years of maturation. I'm really impressed here, not gonna lie. The feel is smooth and velvety, with a slightly oily slickness toward the end of each sip, and a very modest showing of the intense ethanol on order here. This is definitely the best RIS I've had in a while, and it sits in such high regard without any extraneous ingredients or even any type of barrel-aging. Just a big old beer (literally, in my case)... do you dare? You should.

Tasted from a 500 ml Belgian-style bottle.

F - Medium to thick body with a creamy, silky feel. Low carbonation. Medium to high hops bitterness that pairs well with the bitterness from roasted grains. Strong alcohol burn., but not harsh because it is in good balance with the other strong sensations.

O - This is a delicious beer, overflowing with rich, deep aromas and flavors. A delicious, satisfying beer that is among the best examples of the style I've had.

4oz sample served in a plastic cup at the source. Presents opaque black with barely a trace of tan head. Retention and lacing is minimal. Chocolate and char in the nose with hints of roast and coffee. Full bodied with a creamy, velvety mouthfeel. Brownie batter and Oreo shells on the palate. Finishes fairly dry with lingering bakers chocolate.

Also tried 2017 on draft that was faded and oxidized with a cola-like aftertaste.

Very dark brown, bordering on black, appearance. Medium bodied for the style. The oily liquid was topped by a creamy, frothy, khaki colored head that slowly fell to a thick bubbly mass. A curtain of spotty lacing coated the glass.

The nose was really rich and robust. Big roasted malt and sweet caramel notes were immediately noticeable. Loads of fresh coffee too. I am shocked that this beer does not contain actual coffee. Strong milk and dark chocolate notes. Boozy but not at all hot. There was a powdery yeasty quality as well. Dark fruits were also apparent. Plums and raisins for sure. Touch of brown sugar.

The flavor profile was also quite interesting and complex but somewhat rougher around the edges. Malty and rich up front. Nice mix of roasted and sweet caramel malts and some brown sugar notes. The roast profile intensified as the beer moved along the palate. Slightly smoky in the center. Raisin and plums were also apparent. Acrid, bitter roast and sharp piney hop notes rounded things out in the finish. Moderately boozy. Some ashiness lingered on the palate after the swallow. As the beer sat, both the roast and hoppy notes mellowed out.

Nice creamy, frothy mouthfeel. Medium bodied for the style. The liquid contained a moderate effervescence. Slick and smooth on the palate. Solid.

Vinatta Russian Imperial Stout is a robust and complex Russian imperial stout and an excellent traditional representation of the style. In a beer landscape where almost every notable stout is either barrel aged or coffee infused, it is refreshing to try an unadulterated take on the style. That said, my six-plus month old bottle seemed a bit raw. Perhaps another year-plus in the cellar could smooth out some of this beer's rougher edges and transform it into something truly magical.


A:
Pours a robust jet black with a couple fingers of khaki mousse. Decent retention; some lacing. (4)

M:
Full body with a thinnish feel light carbonation and a roasty finish. (3.75)

O:
This is a pretty good beer.
It is a roasty, thick, boozy stout but nothing really pops and it is a little thin. Kind of an okay/cinnamon astringency throughout and the alcohol comes through as well. It would be better with a little more rich roast notes but it isn't bad, either. As it warms up to room temp some chocolate comes out but not enough for my tastes. (3.75)

Batch 2/7, whatever that means?

A: Pitch-black pour with a tall dark brown head. Head is thick and long-lasting, the lacing not so much. Just little specks here and there.

S: Burnt toast and cocoa immediately. Some dark fruit like figs and prunes.

T: Charry burnt toast up front with a backing of prunes. A touch of dark chocolate at points. Finish is leathery with lots of prunes and a touch of star anise, especially in the aftertaste. Hints of smoke here and there randomly. Very very little heat despite the 12% ABV.

O: Definitely a true RIS. It has pretty much every flavor stuffed into one stout. Not just a chocolate bomb or a coffee bomb, it's got the whole kitchen sink in here. Mouthfeel is off the charts and there is little harshness. Great beer, it feels very traditional and it sticks to the style well.

a very smooth imperial stout from Kelsen. Despite the 12% ABV, it is very drinkable. rich malty scent and a lighter mouth feel than most heavier stouts. While the alcohol strength comes on in on the nose, but leaves in the finish which leaves a nice aftertaste.

Pours pitch black with dark brown highlights and an almost non-existent dark tan ring of of a head. Smells of lightly toasted sweet dark bread (think squaw), and brown sugar, with a hint of alcohol. Taste follows with a big helping of roasted coffee beans and some earthiness, a touch of dark fruits, and elevated alcohol presence as it warms. Feel is very balanced starting sweet, finishing dry and bitter with mild to moderate carbonation. Overall, this is a well made RIS, and I am always happy to experience non barrel aged offerings of this quality. Cheers and thanks again Tim!

Many thanks to SawDog505 for this beer!

A - Pitch black pour with a frothy, thick lacing.

O - This is an AMAZING beer that's under the radar. I want more. 'Nuff said.

Very dark brown pour with a frothy tan head. Layers of tiny carbonation bubbles wash along the sides of the glass. Aroma of dark fruits, bittersweet chocolate, and tobacco. Amazing flavors of prune, leather, coffee, chocolate, roast, malt and anise all come together beautifully. The thick, soft, crewy mouthfeel is unreal and almost unbelievable. Everything comes full circle in Vinatta and a classic RIS shines brilliantly. Overall, I must say this may be the best RIS's I've ever had!